Shelby: I am the only ladywriter here at Retcon Punch. I’m certainly not trying to minimize the “ladyness” of some of the other writers; I think Patrick and Drew may be bigger feminists than I am. Feminists or not, I think being the ladywriter gives me a certain empathetic view point when it comes to reading about our lady heroes. Or, it would if I thought I could at all relate to these metahuman women, running around with their tights and boob windows. Enter: Barbara Gordon. She has the same sort of inner monologue that I have; she doubts herself, she’s unsure, she’s conflicted. Of course, she’s got much bigger inner fears and issues than I do, but I can understand her. And that is why I love reading about her.

Issue 7 opens with Batgirl being drowned in a sewer. She’s fighting a man in a horned devil mask and tuxedo named Grotesque, and at the immediate moment she is losing. She manages to knock off his mask and loosen his grip, and while she’s trying to catch her breath, he disappears, Batman-style. Rewind to 2 hours earlier, when she meets up with …Black Canary! Hooray for a Birds of Prey cross-over! Anyway, Babs is looking for a sparring partner to clear her head, and while she’s fighting she has a brief flashback of the Joker at her door 3 years earlier. Jim Gordon finally has a sit down with his ex-wife, who showed up at the precinct to let him know she left because of their son. Back at the dojo, Black Canary literally slaps some sense into Batgirl, basically telling her to get over herself and gives our gal Barbara a lead on something going down that none of the Birds were able to follow up on. Surprise, it’s Grotesque and his goons crashing a super elite birthday party. Turns out, he just wants to steal some ultra-rare wine, and when the host says no, he smashes his head in. Fight fight fight, Grotesque absorbs some electricity (?) and then leaves. BG pursues into the sewer, and now we’re all caught up. She’s checking out the goons Grotesque left behind, and makes the horrifying discovery that one of them was with the Joker when he shot her and left her paralyzed. END SCENE.

Honestly, it’s titles like this one that make me glad I read comic books. I know we’ve said it before, but I’m saying it again; Gail Simone has done a incredible job finding Batgirl’s voice. The last arc with Grendel kind of made me forget about some of Barbara’s anxieties, her insecurities, her fears, and it all comes rushing back here. Simone has done something really interesting by directly referencing The Killing Joke, which I had not read. I know, I’m a bad nerd. After last month’s issue hinted at referencing it, I actually went out and bought it, and I’m super glad I did. Sure, I already knew what happens in The Killing Joke: the Joker tries to drive Jim Gordon mad by shooting his daughter in front of his eyes, Batman rescues him. I probably didn’t need to read it. There was, however, something super powerful and just delightful about really knowing the story, and seeing specific panels reproduced so carefully here.

Let’s talk about art for a second: wow. Ardian Syaf has blown me away, especially with the final panel of the issue, which is absolutely my favorite. 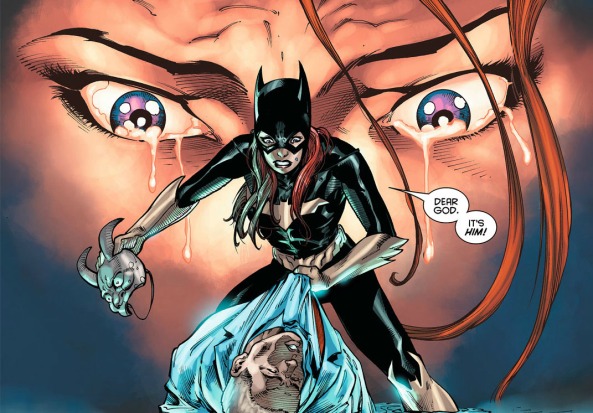 This is incredible! There is so much emotion in this image, it resonates perfectly with what Babs is going through here. Just when she was getting back on her feet (no pun intended), this would seem to very effectively knock them out from under her.

So, what do we think Batgirl is going to do next with this? If this had happened to her even last issue, I would think she would curl up in a ball in the corner in a panic. But after getting knocked around a bit by Black Canary, I’m worried she’s going to react to the opposite extreme. I could see her getting MAD, and running off to do something poorly thought out and very reckless. Plus, we’ve got this very powerful, very intriguing, very mysterious new villain in town. As the cherry on top of this powder keg of a sundae, we’ve got the developing news of her mother, and her brother.

What does it all mean?!? I know there’s some craziness re: James, Jr., but I’m not super familiar with it. In that I know he’s crazy, and that’s pretty much it. I’m actually not totally sure he’s crazy, so there we go.

Moral of the story is, there’s a reason I recommend this title to people. Simone has crafted a voice for Batgirl, for Barbara Gordon, that is powerful and independent, but realistically flawed in a way that all women, all people can somehow relate to. I cannot wait to see where this new arc goes.

Patrick:  I’m so glad I caught up on Birds a few weeks ago. Dinah’s appearance was a nice treat – the likes of which we don’t really get to see that often. Black Canary and Batgirl are peers, they know each other’s secret identities, they know each other’s histories, but there’s no power dynamic at play between them. Sure, Babs could have had this conversation with Bruce or Dick, but there would have been all this additional baggage. Black Canary allows Barbara to be Barbara and Batgirl to be Batgirl – it’s sort of the perfect backdrop for this naked of a conversation.

There’s a really cool little emotional art cue that really impressed me here. The first really solid hit that Babs lands on Dinah while they’re sparring has this kind of jaggy border. Up until this point (and the majority of what follows), all the borders are very clean, usually even straight lines at 90 degree angles with each other. It’s jarring, and gives the panel violent little pop. The only other time we see this technique? Dinah smacking some sense into Babs.

There’s even kind of a reverse-symmetry to the staging of these two panels. One last thing that I like about them and then I’ll shut up, I promise: in the first panel, Barb’s narration is going on in typical Batgirl fashion, and in the second Dinah is telling her to stop talking. Really cool stuff.

Here’s what I found a little weird about this issue – we’ve got some really good internal conflict, and it’s clear that the shattered family dynamic is going to come back in a big way, what what a strange set of crime fighting beats. The villain is after a rare bottle of wine? That’s pretty trivia, even at the impossible price of half and million dollars. Shelby, you and I were talking the other day about just how much money Bruce must have access to (Forbes estimates it at about $6.2 billion, but it’s just got to be more). Even if Batgirl is overselling the wealth of the patrons of the Cartier’s One Club by comparing it to the Wayne fortune, $500,000 is nothing one of these schmucks should be willing to die over. Moreover, it means we get a clunky bit of exposition about the vintage and history of the wine itself. So maybe Grotesque just wanted an excuse to murder a rich man? But then why didn’t he just march in there InFamous-style and just light dudes up with his electricity powers?

It’s the old “this villain isn’t a time-tested antagonist and I don’t know how I feel about him” thing again. He doesn’t seem particularly interesting or scary – proof of which is the fact that all of his real-time menace is upstaged by the mere memory of The Joker in a Hawaiian shirt. He seemed to think that being unmasked by Batgirl would be significant, so we can play the guessing game as to who he is and why that’s significant to her (especially given that he likes hiring the some henchmen as Joker). The temptation is to guess James Jr., but not only don’t I get that, dude doesn’t even have red hair. Rule #1 in the Gordon Household: Have Red Hair.

But my issues with Grotesque aside, I like this issue because it has much more to do with Barbara’s ongoing fears and survivor’s guilt. I still think those themes make the character unique in comics, and also totally justifies the decision to get Oracle out of the chair. It’s also just such a damn pleasure to spend time with Babs. It’s not only that Simone has so consistently nailed a voice for her heroine, but that that voice is so compelling and fresh. There’s a moment in issue 3 where she addresses the reader directly, asking if we can keep a secret for her. I love that she keeps this running narrative in her own head, and feels the need to address an imaginary audience (that just so happens to be more real than the character addressing it – don’t think about that too much). In this issue she addresses the Diary In Her Head. Awesome.

My first response to everything in the Gotham books now is: Owls? Owls? Are they Owls? With the Night fast approaching, I’m actively wondering weather Barbara Sr., James Jr., the Joker Henchman or Grotesque figure into the Court of Owls story-line or if snuffing out any of these conflicts will be simply marking time until we can start Owl-fight proper. It’s cool to imagine all or any of them as being a part of Gotham’s extra-secret history, but maybe this is also just a good time to build up a rogues gallery for Batgirl. Mirror and Gretel could both have staying power, maybe once we learn a little more about Grotesque, I’ll feel the same way.