Peter: Sometimes I would kind of like to see comic book story lines not follow the expected progression. Most of the time, after about the first half of a story arc, you can guess what is about to happen; maybe not the specifics, but you can pretty much figure it out. That’s what I thought was going to happen with Deathstroke. I figured, “How hard could it be?” he’s an assassin. He kills people. He gets paid. Sometimes he takes on superheroes…for money, or personal benefit. So really I thought I had this all figured out, and then I read Deathstroke 7. As it turns out, I had nothing figured out, and you know what? I am extremely okay with that.

This issue starts exactly where the last one leaves off; with Slade under a huge pile of rubble. He and his friend/weapons supplier Alex leave Detroit, and as they drive Slade heals and he convinces Alex that it IS Grant who is behind the Legacy thing. Slade then comes upon the house where Grant and the rich people are, and busts in, sword in hand. Then a fight breaks out between Slade and his son. Then they keep fighting. During the fight, they banter about some father-son relationship problems, and about how Grant, while ultimately better than Slade, was undervalued, and not loved as a child. Then they fight outside. The parents totally then use the Legacy suit’s built in safeguards against Grant, disabling the suit when he is pretty much about to kill Slade. They then give Slade the opportunity to end the whole Legacy thing, but only if he kills Grant, and eye for an eye so to speak. Well Slade doesn’t take well to that, and kills the parents pretty fast, in the process getting shot a couple times. As he lies on the ground bleeding, Grant gets up, and as he is about the kill Slade with his own sword, he has an inner monologue that ties the main theme of the story arc — respect — all together, decides not to kill Slade, and walks away.

Phew. That was intense. I have to say I really enjoyed this book overall. It did mostly what I expected out of this book; a big, bloody brawl between father and son, and it executed that really well. The art of this issue is really tight, with lots of close ups on characters faces, making the story move along in between the panels.

This is absolutely GORGEOUS. I cannot get enough of this. The action scenes are paced incredibly well, and it feels so cinematic as you flip through the pages. Also the close ups allow us to feel the facial expressions of the characters through their masks, until they end up taking them off, give another layer of personalization to this fight. Great art team on this book: Joe Bennett on pencils, Art Thibert on inks, and Jason Wright on colors. Aside from the pacing, the composition of the panels is great. Each panel is different: angles, zoom, and depth. Composition-wise and panel set-up wise, this was my favorite book of the week.

I really did like this book. Last time, I called this series the Michael Bay of comic books. Well, that probably still is true, but this books a giant leap in the right direction. In fact, despite the small of amount of text:images, I like Kyle Higgins’ writing in this issue of Deathstroke than any of the previous issues. I really enjoyed that Higgins brought the ‘respect’ theme full circle, and the dialogue between Slade and Grant clearly illustrates each other’s own opinions on the matter. Clearly Slade is not pleased with Grant, and what he has become, despite all these years of thinking he was dead, even going so far as to call him ‘insecure’ and then completely disown him at the end of the book. But it very obvious despite all of this, Slade still loves his son to some degree, or at the very least has some respect for him, just as Grant realizes that he has respect for Slade. Slade kills the angry parents, instead of killing his own son, which could have been just as easy, if not easier. When Grant decides not to kill Slade, he clearly can’t do it, and has a teary-eyed response, knowing that his father chose not to kill him, and for that at least Grant respects his father, even in the end. 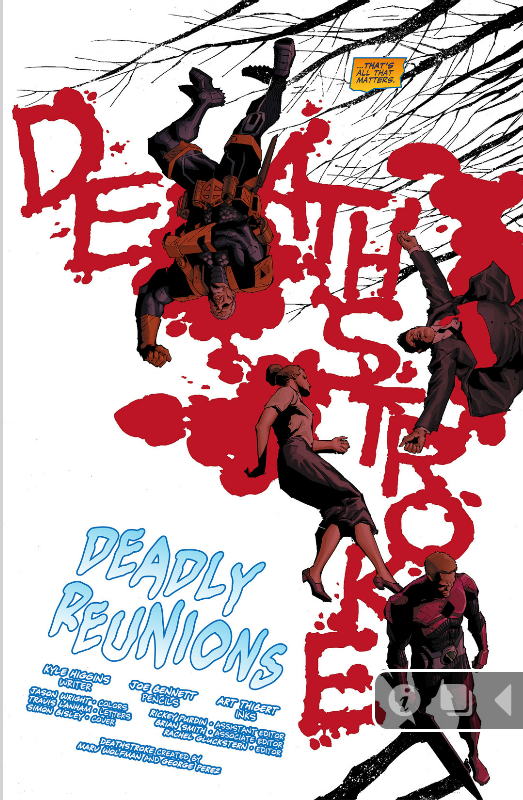 Man that is a gorgeous shot, it reminds me of an old school shot, but it also puts the title page as the last page of the book, not as one of the first.

This book is leaps and bounds above its predecessors. It makes me think about the father-son relationship that gets a crash course in this issue. Slade has also earned what he set out for in issue 1; respect, and from a very unlikely source, his crazy son. I think that this book is now on it’s way to being awesome, if the Deathstroke team can keep it up.

One last note, why does a guy with one eye need to use binoculars and not a monocular. Or better yet, it’s not built into his helmet?

Shelby: Thanks a lot Peter, you had to go and include that final title page, totally stole away my favorite panel. Not only is it visually striking in an old-school movie poster sort of way, I also really like having the title page at the end of the issue. It’s like the writer/artists didn’t want to break the action at all, they just wanted to dive  right in to the story and get to it.

And it’s a good story, too. Higgins, Bennett, and Thibert continue to bring us an action-packed, gory story with substance, a bloody final battle backed with character development and a satisfying but not too neat conclusion. I had a slightly different take on the ending than you, Peter. While I definitely get the tie-in to the  mutual respect the warriors have for each other, I really believe in my heart-of-hearts that it wasn’t respect and fatherly love that stayed Slade’s hand. I do believe that it was more about perspective and reputation, the other two big players in this arc. Slade can’t let it get out that he let these two rich pansys dick him around and force his hand. NO ONE forces Deathstroke’s hand.

I honestly believe that, if those two hadn’t been involved, trying to pull strings, that Deathstroke would have either killed Grant, or died trying. And, once again, I don’t know how, but Higgens has crafted a character in this arc that I can believe that of, and yet not despise. I also was really excited to read Slade talking to Peabody about what he was doing physically to heal himself after being hit by a submarine. I mean, it’s one thing to see Wolverine get totally fucked up and just shake it off, no big deal, but there’s something so much stronger about Slade having to actively will this healing process to begin. I mean, I’m lucky if I can get my lazy ass to the gym.

I know I’ve already raved about the art, but I’m going to do it just a little bit more. There’s such a great attention to detail in this title, which I think is important to maintain clarity in a comic so action packed. It’s little things, like a close and tight panel of Slade leaning against a car window, with his washed out and blurred reflection. Or seeing a pair of gardening shears in one panel, and then a couple panels later seeing Deathstroke fling them at Grant. So satisfying.

All in all, a great read. We had a solid ending to the arc, but not TOO solid. Not only has our villain disappeared into the night, but Slade is looking pretty trashed by the end. I don’t know where this title can go next, but I think Higgins has established a great universe, and I can’t wait to see where he takes this character next.