Peter: When I first picked up All-Star Western several months ago, I was skeptical. I had  read Jonah Hex in its previous incarnation, written by the same authors, but I didn’t remember much of it, and without a recent exposure to the time period I didn’t really know what to expect. I assumed it would be difficult to make a good book that was set in a completely different time period from the other New 52 books, but I was dead wrong. All-Star Western has proven to be a fantastic book that I look forward to every month.

Issue 7 picks up with Jonah and Arkham arriving in New Orleans. As soon as they get there, the action starts, with a nearby mill blowing up. Jonah, in surprising fashion, runs into the fire with his horse, to rescue victims.

Hannibal/Nighthawk, and Kate/Cinnamon show up in their civilian identities to help as well. They save Jonah, and retreat back to their place. They ask Hex for help stopping the new menace in town, the August 7, a group of anarchists who caused the mill bombing earlier, and apparently a series of other bombings around NoLa. Nighthawk and Hex have a small tussle over this, because Jonah Hex does what he wants, and doesn’t take orders from anybody. This apparently isn’t anything new between Hannibal and Jonah. After some sniveling from Arkham, Hex finally agrees to help, and they split up. Hex goes to a riverboat that doubles as a gladiator ring to do some ‘sleuthing’. Nighthawk and Cinnamon, donning their costumes, leave Arkham at home to go out in search of criminals. Hex meets a southern gentleman, who begins to explain his theories on immigration and supremacy, while the first gladiator fight begins. Enter Z.C. Branke, a femme fatale who uses agility, and small, quick attacks to wear down here behemoth of an opponent. This is narrated by Hex’s new friend using her fight as a metaphor for the August 7’s anarchistic and guerilla tactics. Then Hex steps into the ring, taking the nickname from Scarface from the crowd, and dispatches his own large immigrant man. Upon doing so, he is challenged by the deadly Z.C…..

This book is technically the beginning of a new story arc, kind of. I really liked that Hex went to NoLa under the pretext of hunting down Thurston Moody, obvious member of the Court of Owls from Gotham, and the organizer of the Temple of Doom-style child mine underneath the city. But it really just stops there. This is really only mentioned in the opening narration, and then we jump right into the new story. I really love the continued effort of Justin Gray and Jimmy Palmiotti to create an awesome story. I love that the books connect across story arcs, while still making an obvious switch.

I also love the introduction of new characters into the arc, particularly Nighthawk and Cinnamon. They are the polar opposite of Hex in terms of fighting crime. They are the traditional super heroes; they fight crime with masks, no need for reward, and never sleep ever. Remember, they are previous incarnations of Hawkman and Hawkgirl, and love each other enough to power the Star Sapphires. Plus, they poke jokes at it.

I also, love the idea of a team up. Hex is pretty much a loner, and even when Arkham started tagging along, he was more doctor than crime fighter. With the introduction of Nighthawk and Cinnamon, I hope that we can see how well Jonah plays with others, but also a further foray into his personal crime-fighting ideology. He’s traditionally a bounty hunter, but could that change? Does he do both? We shall see.

The August 7 introduces a new villain team for Hex to take on, and they are crazy. We really haven’t met them yet, except for the deadly Z.C. Branke, but we know what they are all about; American purity. It’s similar to Confederate ideals, keeping America pure of immigrants. It’s not a totally unheard of idea, (see Scorsese’s Gangs of New York) but this is the first in recent memory that I have read about it in a comic book. This I love. Something new, but also very realistic. All of the story ideas that Palmiotti and Gray are coming up with could actually happen. Kidnapped children being used as forced labor, serial murderers, and terrorists with a vendetta against immigrants are all very real possibilities, and fit incredibly well into this time period.

I have enjoyed the art given by Moritat in this title. It’s been really sketchy, and colored with some sepia hughes and other great color choices. I thought the art team perfectly captured Gotham in the 1880s, and they do equally well with NoLa. It is somewhat similar to Gotham, but also very different. First thing I notice is on the first page; the sky is blue. Gotham never seems to have a blue sky. But we are shocked out of that with an explosion. Some of the art falls a little flat in this issue, the pages and panels just don’t jump as they have in previous issues. But the fight scenes with Z.C. are fantastic, I think I was even rooting for her.

I am really looking forward to the next issue. This story continues to be awesome, and the art superb. We are given a new back up story as well, and for the first time, it ties in with the main story. It’s a background story on Nighthawk and Cinnamon. I love the origin story of Nighthawk. It really gives his background and early forays into crime fighting. We don’t learn how he meets his fated love, but I hope we will cover that soon. Drew, you and I have been reviewing all of these books together, do you love this book as much as I do? Do you enjoy that it’s set so far from the other DC comics? What excites you about this book? 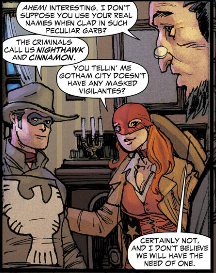 Drew: Man, Peter, you keep hitting the nail on the head with these movie references. This does remind me a lot of Gangs of New York, but I actually worry that the southern setting makes too much sense. Northerners tend to think of this type of latent xenophobia as a southern problem, and while institutionalized actions like Arizona’s proposition 200 are a reality facing immigrants and minorities in the American south, these tendencies actually proliferate much of the country, as well as the world at large. I bring this up not to blame Gray and Palmiotti for setting this story in the south — it had to be set somewhere, and you could be sure that overtly racist and xenophobic opinions were rampant in the postbellum deep south — but to prevent myself from any smug self-satisfation as I shake my head at these ignorant southerners.

Indeed, Gray and Palmiotti may have chosen specifically to set the action away from the regions the story seems most intended to criticize: citizens of the southwest demanding that the government “secure our borders.” Hiram Coy, the southern gentleman Hex finds an in with, complains about jobs being stolen, rising crime rates, and a government either unable or unwilling to do anything about it — points that populate xenophobic rants to this day. The fact that Jonah is putting Hiram over with his talk of freed slaves and boatfuls of immigrants gives us some emotional distance, but one of the key details that sells his story — his confederate uniform — isn’t a put-on. I’m new to this character, so I can’t claim to understand his beliefs, but it is curious that a non-racist would wear that uniform. I get that there are other issues, from states’ rights to just plain old pride, but it seems like his motivations for wearing the uniform is an important detail worth exploring if we’re going to spend much time with white supremacists. (Peter: if this is something that has been covered before, please fill me in in the comments.)

This weirdness kind of carries over to the back-up, where we learn that Nighthawk worked as a boy on a whaling vessel, captained by a former slave, who insisted that he attend school regularly. I get that Gray and Palmiotti wanted to make Captain Monbelle a near-angellic figure, while also explaining Nighthawks intelligence and worldliness, but I just don’t see how that could have been logistically possible. When did he have time to attend school “regularly” if he was working for a living on a whaling ship?

While I’m in complaining mode, I have to say something about the outfits Mortiat is putting the female characters in. The outfits the prostitutes were wearing in that saloon in the first issue were a little over the top, but they were prostitutes, so it didn’t seem out of the question. I don’t think there’s any excusing a high-society lady from bearing as much leg as Angelina Jolie at the Oscars, though. 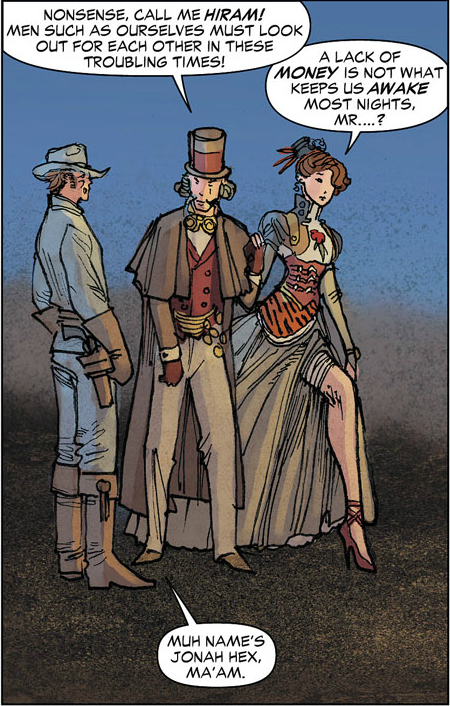 That would be pretty scandalizing to any 1880’s gentleman, southern or otherwise, but it’s nothing compared to the corset and thigh-boots ensemble Z.C. is rocking. You’re telling me a bunch of southern dudes who feel their society is being dragged into the sewer by immigrants are watching a girl parade around in that?

I spent a lot of time (maybe too much) today on Escher Girls, which may be raising my sensitivity here, but is there any reason Z.C. couldn’t at least be wearing some pants? Cinnamon is wearing some slacks, and while it would still be enough to shock a crowd in the 1880’s, it doesn’t feel exploitative. Don’t give me any of that crap about restricting her movements — she’s wearing a corset and leather boots that cover her knees; not the most practical fighting gear.

My complaints about costuming aside, I think the strangest thing about that fight scene is that we do end up rooting for Z.C. Sure, she’s pretty ruthless, and is representing some truly appalling ideology, but that revulsion is pitted against our desire to root for what seems like the underdog. Of course, Z.C. turns out to be a far cry from the underdog, but who roots for the hulking giant when he’s fighting a little girl? It’s a neat trick that Gray and Palmiotti pull to get us on her side, however temporary that allegiance may be.

To answer your question, there’s a lot that excites me about this book. I love westerns, and while we haven’t really spent any time in the west yet, it definitely has the feel of some of the best oaters out there. I was also drawn in by the Gotham tie-in and Arkham’s journal-style voiceover. I’m happy to be moving away from that stuff, but we seem to be in a weird transition phase where Arkham is still around, but he’s not really doing anything. Gray and Palmiotti have their hands tied a little bit in needing to keep Hex around Gotham until the Night of the Owls crossover is over, but Arkham feels even more useless than normal here. This definitely has the feel of the first issue of an arc, so it’s tough to say much until we’re a little further in, but we’re definitely off to a good start.