Patrick: There are an awful lot of impossibly powerful creatures in the DC Universe. When you take the game out into the depths of space, that number rises exponentially. That’s when you start to encounter beings that refer to themselves as gods and angels. Thus the question is frequently posed: “How do you stop an unstoppable force?” Invariably, the answer is “together” – the combined strength of our heroes will save the day. But New Guardians 7 takes that “together” answer literally, making the group’s unity their ultimate weapon.

The issue open with six sevenths of our heroes reeling from their encounter with the Arch-Angel Invictus. Employing the last trick in their collective arsenal, Saint Walker uses his blue ring of hope to mind meld with their enemy. It seems that Invictus was once one of many angels that spread their benevolent love across the Vega solar system. The angels were successful in fostering the most compassionate and righteous society in the universe and for a time, they were happy. But then Larfleeze came along and began trying to recruit an Arch-Angel for his Orange Lantern Corps. Now, the only way Larfleeze can achieve this, is by killing an angel and re-appropriating its soul as an orange construct. Naturally, Angel-souls behave atypically; when an angel dies, its spirit strengthens its surviving brothers. So Larfleeze, kills all but one in a vain attempt to catch ’em all, but in so-doing  leaves one super-powered foe: Invictus. The Arch-Angel is set use his new strength to expel Larfleeze to another dimension, but loses his composure when he realizes Larfleeze’s undead army is made up of the righteous citizens of the Vega system. Seizing the opportunity, Larfleeze pushes Invictus into the other dimension.

That’s more detail than I’d usually include in a plot summary — and way more full-page images than I’m totally comfortable posting — but for me, this flashback is the real victory of the issue. It’s a dynamic and compelling bit of original mythology. It’s also really economically expressed in what I wish could have been a 4-page fold-out. Enlarge that image – that’s what Green Lantern: New Guardians is capable of.

The rest of the issue concerns the New Guardians uniting against their foe despite their obviously conflicting agendas. Invictus is moved by their teamwork and says that he will let them live if Kyle kills Larfleeze. And as much as I like Larfleeze, it does seem like he has it coming.

The individual displays of teamwork are nice, and it actually seems that the characters arrive at them organically. Arkillo steps up to protect Walker, even going so far as to call him his “friend” (well, almost). Walker and Munk work together to amplify their collective hope power. And now of sound mind, Bleez joins the fray, intending to rescue her friends. None of their heroics have the intended effect, but the point is that they’re trying.

Noticeably, Glomulus doesn’t much contribute to this team-work. Glommy’s kind of odd case though, isn’t he? In issue 5, Kyle asked him whether he was still himself or simply a puppet for Larfleeze, to which the construct replied “Glomulus is not Larfleeze. Glomulus is Glomulus.” So I don’t know whether to excuse the character for not getting in on the whole teamwork thing. What does Golumlus want? If Kyle kills Larfleeze, what happens to construct-Glommy?

I remain pleasantly entertained by this series – and I still prefer it to Green Lantern Corps. I love Larfleeze as the persistent villain of the series, and it’s nice to see Invictus turn the New Guardians’ aggression back toward the Agent Orange. I hope there’s some way that the Arch Angel can stick around as a Captain-Planet-esque figure that these seven can summon when they pool their powers.

Oh and it wouldn’t be a Patrick-and-Drew-joint if I didn’t point out the shamefully obvious T&A on display in this issue. Last time, you were quick to ask “What. The. Fuck.” about the way Fatality is portrayed (TITS), but my problem here is with poor lady Bleez. One of the easiest signs that your comic book artist doesn’t give a shit about a lady-character is the ol’ face-tits-ass rule. If you can see all three at one time, then you know something weird is going on. And by “weird,” I mean only shitty and predictable and embarrassing and all that. My rage at this particular issue is starting to be dulled from over exposure, but I’m not going to let said dulling keep me from fighting the good fight.

Come on, Tony Bedard and Tyler Kirkam. This book is so good, I wish I could give it an unqualified endorsement. As it stands, I recommend New Guardians on the caveat that it’s a comic book, and hasn’t outgrown the sexual baggage that implies.

It’s kind of cool spend some time with lanterns without worrying about what the Guardians (the blue ones, that is). While they drive so much of mystery of the other series, I really enjoy taking a break from them. Drew, how do you feel about letting the focus drift away from Oa?

Drew: The general complaint with the face-tits-ass rule is that there are very few angles where it’s physically possible to see all three on a human body, which often prompts artists to contort character’s bodies in all kinds of impossible ways. In this case, poor Bleez is arching her back an impressive 90°, which probably wouldn’t be the flying posture I would choose if I were trying to demonstrate my newfound reason (unless I was also trying to show off my new rubber spine). You could argue that Bleez isn’t technically human, so may have some unusual spinal anatomy that makes this comfortable/possible, and while I think that defense is a little too convenient, the thing that actually bugs me about the image is her face. Do you notice anything weird about her teeth? Or, more specifically, do you notice anything not weird about her teeth? In all of the other issues, Bleez has been depicted as having freaky pointy shark teeth: 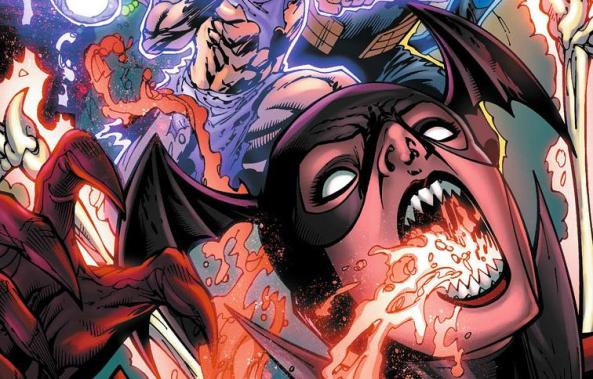 While these are a neat design detail and kind of scary, they definitely don’t bring teh sexy, as they call it over at Escher Girls. Of course, not sexy means not good, so Kirkham lays off that particular detail throughout this issue (and particularly in the image Patrick singled-out). To me, going off-model is actually more offensive than simply twisting the characters in impossible ways — an artist may play loose with male anatomy, as well, if it means a more dynamic image, but they’d never alter a male character’s face just to make it more attractive. It’s dumb, and something an artist with a modicum of respect for his characters wouldn’t do. More importantly, it’s something an artist with a modicum of respect for his audience wouldn’t do. Even if every one of his fans needed drawings of scantily-clad cartoons in back-breaking poses to get their rocks off (and that’s a big, sarcastic “if”), THEY COULD DO BETTER THAN BLOOD-VOMITING RAGE MONSTERS. Also, porn exists for free; sex doesn’t sell shit anymore.

You’re right, Patrick, one of the most aggravating thing about this cheesecake bullshit is how it ends up marring an otherwise enjoyable book. The art continues to be great otherwise, and I particularly like the image of Kyle, Fatality, Arkillo, and Glomulus as they attack Invictus with their various ring constructs. 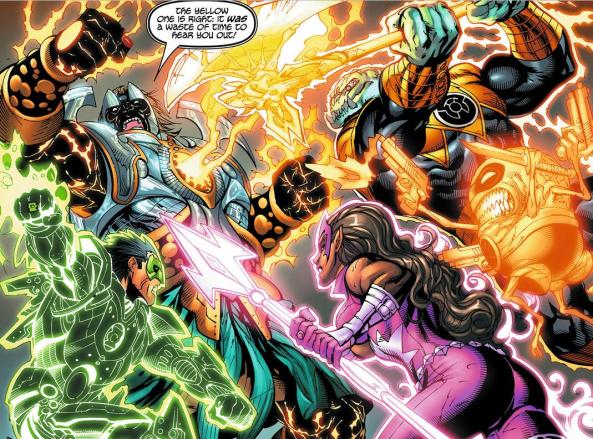 What they choose as their weapon says a great deal about them: Arkillo, of course, chooses a big, scary battle axe; Fatality, a heart-spearing love-staff (giggles). I’m not sure exactly why Kyle chooses a suit of armor — perhaps he’s feeling unpretected? — but my favorite detail is that Glommy is wielding three handguns and a knife. Why the knife? I don’t know, but it somehow makes sense for Glomulus to have a decidedly impractical mix of weapons that clearly aren’t going to have an effect on Invictus in the first place (Kyle has already dropped an ocean liner on the guy, after all).

Glomulus is really strange. It had never occurred to me how weird it is that he wears that domino mask, but the dude’s a friggin’ ring construct — what secret identity does he think he’s hiding? This issue explains that all of Larfleeze’s constructs contain the souls of his vanquished enemies, which explains their autonomy, but ends up asking more questions. If they’re prisoners, why do the orange constructs do Larfleeze’s bidding? What can he threaten them with, un-killing them? What would happen to Glomulus if the team kills Larfleeze?

And maybe this is old hat, but I was kind of surprised to learn that Larfleeze is millions of years old. What’s his deal? Sorry to make everybody explain this to me in the comments, but I don’t really know anything about Agent Orange. How did he come to be the sole possessor of the soul-possessing orange lantern? How did he come to keep a Guardian as a slave/pet? Just how old is this guy?

To answer your question, Patrick, I’m happy to let the focus stray from Oa a bit. We’ve both indicated elsewhere that the PURE EVIL Guardians aren’t particularly compelling, and frankly, the blue dude’s aren’t why I’m interested in the Green Lantern universe in the first place. I’m into this title for high-flying space-operatics, which it does get around to, from time to time (that’s not a solar system, it’s a space station). I also think this title is doing better to establish a team dynamic than many of the others we’re reading (GLC, I’m looking at you). Arkillo stepping in to defend Saint Walker not only feels earned, it also establishes that his “fear is power” attitude isn’t poor characterization — it’s a defense mechanism. If Bedard can keep developing these characters in this way, this title could very well turn into something great. In the meantime, I’m happy that it’s just breezy fun, with or without the machinations of the Guardians.