Drew: Last month, Patrick voiced some concerns about objectively judging this title. Maybe we want to like it too much to say whether we actually do. After putting this issue down a little disappointed, but deciding that it was brilliant before starting this write-up, one could conclude I’ve already crossed the line of objectivity. However, I’d like to make the case for why this seemingly eventless and exposition-heavy issue actually carries the torch of thematic unity that has made this title so fantastic.

The issue begins in the air above Italy during World War II as Turbine — then US Army Air Force Lieutenant Roscoe Hynes — is sucked (along with his plane) into the speed force. Jump to “now” in the speed force, where Turbine fights Flash in hopes of using him to escape. Flash quickly (ha) defuses the situation, and Turbine explains that he’s been trapped in the speed force since WWII, and that only Barry has the power to get out. He also explains that it’s not Barry’s fault things get sucked into or through the speed force — it’s apparently been doing this since the dawn of time, and Turbine’s attempts to escape have caused many of the recent vortices. Turbine tells Barry that Iris must have gotten sucked into another time period, so Barry resolves to return (with Turbine) to the present, in order to avoid altering the timeline. Turbine doesn’t like the sound of that, so another fight ensues, this one landing them in Gorilla City, where Gorilla Grodd has just killed his father in a battle for the throne. Meanwhile, back in Central City, a memorial service is held for four city cops, including Barry, whom everyone believes died in the last issue. We also (almost) get confirmation that Singh is dating the Pied Piper, who has apparently reformed. AND it turns out Iris is stuck in the speed force after all.

That paragraph is long because there’s a lot to explain, but not much actually happens in this issue. I’m not such an action-addict that that alone would bother me, but the fact that there’s no real emotional narrative — no emotions actually change this issue — makes this issue little more than an exposition-dump. All we get are facts. Some are presented narratively, but many feel shoehorned-in, and even more are flat-out explained to us by Turbine. I put down the issue ready to forgive it for being saddled with so much to explain to set-up what would likely be better issues down the line — but then I started thinking about what the issue was actually about.

In the same way that issue 7 required an adjustment in perspective to appreciate it’s theme of unknown effects, issue 8 requires another adjustment to appreciate it’s own theme of rendering cause and effect meaningless. We’ve seen this theme crop up as Barry learned to think quicker, and as the EMP traveled back in time, but this is the first time we’ve encountered it in a world that exists outside of time. In the other instances, it made sense to invert cause and effect, but in a place where everything happens simultaneously, there can be no before or after, so there can be no change. That nothing happens in this issue isn’t a failure of storytelling but yet another example of themes resonating with the very way the narrative is presented.

Not to be too defensive, but this reading is borne-out in the art. Francis Manapul’s wildly inventive layouts are replaced with much more traditional “rectangular panel leads to rectangular panel” normalcy. The few times he breaks with this model, the emphasis isn’t on action, but on depicting the speed force as a very static place, even as our characters move through it. 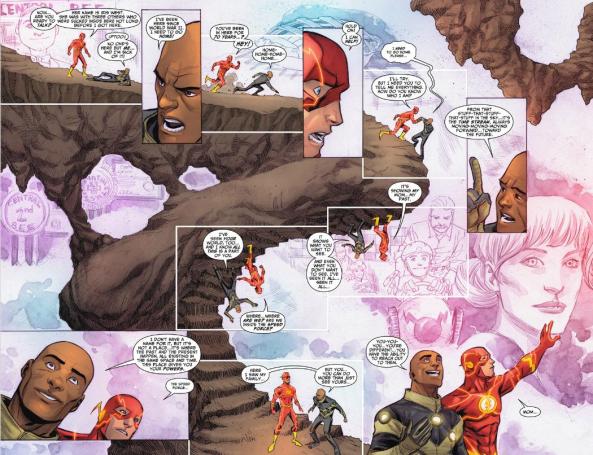 Here, we see the panels guide us as the characters move through the space, but the space itself just hangs there out of time. The issue itself behaves in a similar way, offering no real changes even as our characters move from point A to point B.

The habit of this title to have the way the story is presented so impacted by each issue’s themes can be frustrating, but that in itself is another theme — that of Flash as a moving target. That we never get a good bead on him makes sense for the Flash — more so than more mono-thematic titles like Batman or Nightwing — and that kind of meta-theme really pulls this whole title together in a way that I thought only those mono-thematic books were capable of. On it’s own, this issue doesn’t look like much, but it adds depth to the entire title when taken as a whole.

That is, if that reading holds water. I fully realize this sounds like grasping at straws, and I’m not convinced that it isn’t. I trust this title to handle its themes deftly, but I also understand that that may mean moving the pieces around the board from time to time. The worst crime this issue could be accused of is setting the stage for more exciting issues, but when the highest praise I can give it is that it unifies a brilliant series, being a little more precise seems warranted. Unfortunately, I can’t be more precise.

I always value the cross-talk nature of our write-ups, but this is the first time I’ve been so eager to hear a second opinion on an issue. Not that disagreement would invalidate the reading — I think it works if I want it to — but I could use a second opinion on knowing if I like the reading. Man, I don’t even know if the fact that it has me questioning the nature of analysis is a good sign or a bad one. Help me out here, Patrick.

Patrick: This is definitely a “huh” issue. I think most of what you’re reading into it is actually there. But I know there’s no way you’d look hard enough to find it if this wasn’t a latest The Flash. Let’s not cheapen that, though – the reason this series is so successful is because Manapul and Buccaletto (and the rest of the creative team) have been warm, adventurous and innovative for 7 whole issues. Getting a discerning asshole like you to give a slower issue the benefit of the doubt is a sign  that the abstract form of The Flash works. I think about how quickly we panned Detective Comics 8 (I’m not actually comparing these two because I’m not insane) and I know we were unkind to it because we had no good will built up towards it. And good will is a commodity Manapul has rightly identified that his version of the Flash is flushed with.

By way of supporting your theme-of-stasis thesis, I want to talk about that the scenes that take place out of the Speedforce. First, we’ve got that funeral. Funeral scenes in movies and TV shows almost always serve the purpose to cement some change in our character’s lives. Sometimes it’s as simple as “we’re not going to see character x anymore” and sometimes it indicates a coming power-struggle (or whatever). But this is a funeral for a character we know to be alive. And that’s not the only dramatic irony in the scene: the police chief explicitly says that Barry served the city and was a hero without super powers (he even lists super speed specifically). And as a weird little topper, Patty blames the Flash for, well everything we were just told he’s not responsible for. The worlds and actions of the Central City Police grind against what we understand as true, and the whole narrative stops. We barely even get the Pied Piper introduction (that we did such a kickass job of calling in the comments section last month).

The other scene of substance outside the speedforce is the battle between Gorilla Godds (Gorillas Grodd?).  The outcome of the fight is patently pointless. If the elder wins the fight, he eats the brains of the junior and gains him memories. If the junior wins, he eats the brains of the elder, gains his memories and becomes king. Either way, the two become one and that singular entity continues to rule Gorilla City.

So, I generally support your reading. It’s interesting that you feel the need to determine the validity of your observations. I know there were a bunch of times in high school or college when I would turn in an English paper which I thought had identified a strong thematic through-line, only to have my analysis shot down for not matching up with the accepted scholarship on the work. That’s a devastating feeling. And even if you concede that you missed the principal theme or message or unifying idea of a piece, isn’t there value in your take-away regardless? This is especially true of new art – and this is some of the newest art you can experience. The comic-review-community will rush to a certain judgment about this issue, and a temporary consensus will be reached. But it won’t be for a very long time (if ever) that there’s an authoritative statement on what issue 8 of The Flash was all about.

Goodness gracious, I’d like to also actually talk about the issue. Abstract concepts of theories of literary criticism are fun and all, but this THE FUCKING FLASH we’re talking about.

I love those big double-page splashes you pointed out. Not only do they express the passage of time (whatever that means in that environment) in a neat way, but they also have a fun M.C. Escherish approach to space. But Manapul and Buccaletto double-down on this visual coolness of the speedforce with all of those swirling background memories. Just last week, Captain Atom found himself in the Time Stream, but for that character, the space was an access point for any point in time. It was trippy and cool but way  impersonal. But Barry’s Time Stream / Speedforce is incredibly personal – every panel depicts multiple memories from his life and beyond. Sometimes the images are mundane (there’s one that’s just literally an apple pie sitting on a table) and some are dramatic, but they all effectively feed into the character of Barry Allen.

Really, the water color memories alone justify the purchase of this issue. It’s almost like an invisible layer of paneling behind everything else. I mean, look how the image above is composed and tell me it’s not awesome. There’s easily as much — if not more — storytelling in these background images than in the foreground action.

I mean hot damn: the art in this series! Even sticking to traditional rectangle-to-rectangle layouts, these guys manage to melt my mind with a great little panel where Flash and Turbine start to fade away into their own motion lines.

Yeah, okay, this wasn’t the most exciting issue of this series, but it is beautiful. You know I reads all my comics digitally these days, but I’m totally going to pick up a hard copy of this one tomorrow.There’s just so much Flash-ness on every page, the quiet kind that would look great in a frame or something. Ooooooh! I think I’m doing some crafting tomorrow night!