Patrick: The first issue of any series has an awful lot of work to do. When Drew and I started these things, we covered the first 3 issues of a series. This was partially because it was November before we got our asses in gear, but there’s also the legitimate benefit of having something to evaluate. Set-up can be tricky, but most of the New 52 titles circumvented the laborious expository process by relying on known entities: Flash, Batman, Green Lantern, whatever. Even those titles that were super new to me – like Batwoman, Batwing and Captain Atom – still had their roots in time-tested franchises. Dial H has to build its world, its premise and its main character from the ground, up.

As the sun sets on the not-so-small city of Littleville, Darren Hirsch helps his fat, unemployed, loser friend back into his apartment. The loser in question is named Nelson – he’s rude, he smokes, and the only reason his buddy is hanging out with him in this particular instance is because Nelson just tried to kill himself. That’s your introduction to the hero, by the way. No, not the dutiful friend, the fat jackass.

On his way home from Nelson’s apartment, Darren is jumped by some guys. Fortunately, Nelson is not far behind (unfortunately, dude is basically worthless). He stumbles into a phone both and dials at random number. One flash of brilliant light later and a Dickensian grasshopper of a man emerges from the booth. Nelson has been transformed into Boy Chimney, who commands smoke and has the tallest hat you’ll see outside of a Tim Burton movie. Only, “transformed” isn’t totally accurate. He seems to inhabit the same body of this Boy Chimney creature – his own voice-over is frequently in conflict with or questioning what Boy Chimney says and does. Regardless of who it is, Boy Chimney/Nelson fight off the assailants and deliver Darren to the paramedics.

Nelson learns that Darren was working for noted gangster Vernon Boyne, and those guys were just trying to punish Darren for botching a job. Piece of shit though he may be, Nelson decides he has to help out his buddy and he returns to the magic phone booth. But this time he’s transformed into Captain Lachrymose, who can sense sadness (and also appears to draw strength from it). He delivers the obligatory “Leave Darren Hirsch alone” message to Boyne and then leaves via a hole he ripped in the wall.

I’ve been taking a lot of pot-shots at our protagonist, Nelson. But I think we’re meant to see him as a waste of space. More than any other hero we’re reading, this dude doesn’t deserve our respect. But on the flip side, he’s not asking for it either. He’s a creature of opportunity – a guy at the end of his rope that discovered himself capable of the impossible. He doesn’t understand the power he’s messing with in the booth and he doesn’t understand criminals; his threat to stay away from Darren only serves to goad Boyne into making an attempt on his life. So it’s almost a punchline when Nelson realizes that the numbers he dials to transform, 4376, spells out “HERO.” 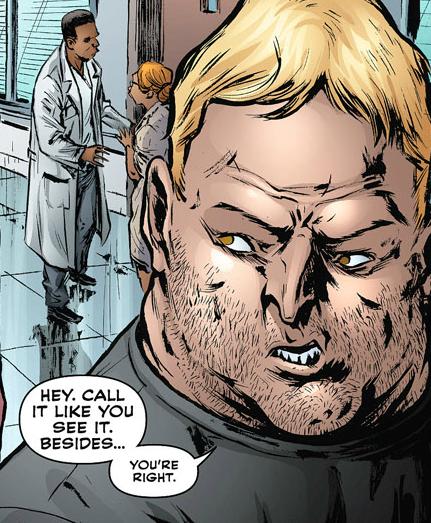 Actually, a lot of this issue is funny. Did you read my descriptions of Nelson’s alter egos? Boy Chimney? How fucking weird is that? Captain Lachrymose? These are like the joke names you made up for that superhero parody short story you wrote in 9th grade English class (just me?). They’re silly, they look silly and their powers are silly. It was hard for me to swallow Boy Chimney, but in the light of the aggressively absurd Captain Lachrymose, I can see them both as jokes: goofs on superhero types. The variant cover art shows off two more “hero,” and I have to say, I’m curious to see just how ridiculous they will be.

The art is a little… strange. Generally, I like it – it has a similar quality Travel Foreman’s work on Animal Man. It has a lot of extra sketch lines and heavy inks leave a lot of the pages mostly black. But while Foreman’s art flawlessly matched grounded and scary tone of Animal Man, I’m not so convinced Mateus Santolouco is such a wonderful match for this story. There’s an intensity to his exaggerated, contorted faces that works really well when establishing the twisted Boy Chimney, but then feels crazy-out-of-place for a light-hearted chat between friends.

The spider-like paneling during Boy Chimney’s action sequence is really pretty cool. It’s intense and kind of chaotic, which fits the moment pretty well and does a lot to make the character’s goofiness a little more bearable. Captain Lachrymose is similarly hilarious in appearance, but Santolouco’s choice to favor wide-angle lenses when that character is around lends a little thematic weight to an otherwise ridiculous affair. I mean, look at the dude’s haircut (and the single crying eye on his chest-logo): 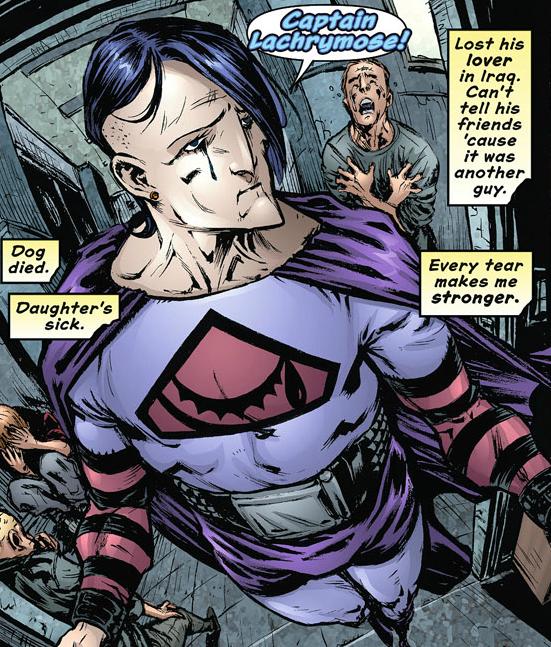 The writing here is admirable. I don’t love it, but I think that’s mostly because there’s so much that needs to be introduced in this issue. This one 24-page volume did a fine job of setting up multiple mysteries (what’s the deal with the phone booth? what is Boyne up to?), delivering some stylized action and even giving the characters some natural-sounding conversation. I’m looking forward to seeing what Mieville can do when the title gives itself a little bit of room to breathe.

What did you think, Peter? Everything we’re talking about this week is part of something bigger (MULTIVERSE, ROT, OWLS) – but this isn’t. It’s sorta refreshing to read something so new and (so far, anyway) so isolated.

Peter: I agree that this is a nice change of pace. Dial H is an incredibly interesting idea that DC has brought back from the past. The concept of some becoming a different hero every time they get into a phone booth is completely unique to this book. No other comic book has someone who is a different hero with different powers every time. It’s almost like the Choose Your Own Adventure of comic books.

Nelson is a terribly interesting character. He hates himself, his friends don’t really like him, and he doesn’t really seem to care. I agree that we are supposed to see him as a waste of space. It is possible that as the story goes on, we will see Nelson develop more and more has he discovers both new heroes and a new purpose in his life. After he saves Darren, he goes back to the alley with the phone, and is already taking his superhero-ing more seriously.

He changes the way he dresses and the way he holds himself in this shot. He wants to figure out what happened and how he turned into Boy Chimney to help Darren, whereas before, he seemed pretty happy just lounging around his apartment chain smoking.

Also, it seems that so far that the heroes that Nelson is turning into are somehow linked to his traits. He smokes a whole lot, and then he turns into Boy Chimney. He is really sad, and then he turns into Captain Lachrymose. I am anxious to see that comes next for this book. I really enjoyed this first issue, and look forward to reading, and learning more about the world of Dial H. I have so many unanswered questions that I want to find the answer to, like can he use more than that phone? Or can other people dial HERO? I can’t wait for the next issue.