Today, Patrick and Peter are discussing Batman and Robin 9 originally released May 9th, 2012. This issue is part of the Night of the Owls crossover event. Click here for complete NotO coverage. Not caught up on Batman and Robin? No problem! Get up to speed with our video Cram Session.

Patrick: I’m spending this weekend with my family in Fort Benning, Georgia. My older sister and her family live on post here, and my folks flew in for my little sister’s graduation from the Army’s officer training program. The ceremony is about what you’d expect: a lot of pomp and circumstance, Army pageantry and pride. The rest of the weekend has been spent playing with my niece and nephew. This month’s Batman and Robin is focused so tightly on both children and the military that I feel extra fortunate to have experienced it here, far from my Hollywood world.

The issue opens on Damian sweeping the sewers for… something. Naturally, whatever mundane crime-fightery he was up to is interrupted by Alfred’s call to arms. Robin gets his marching orders (and a JETPACK) and zooms off to protect Major General Benjamin Burrows, the 52nd Adjudant General of Gotham. The General is overseeing some field drills out in the Gotham Barrens, so the remainder of this issue turns into Robin defending him from a Talon in the context of a military training exercise.

Burrows is injured in an early encounter with Talon and Damian takes command of the soldiers through feats of impressive athleticism and an awful lot of shouting. Incidentally, I am told this is how anyone takes command of anything in the Army. Damian drags the General and his soldiers closer to their base, but eventually have to square off as a Talon approaches. In an uncharacteristic moment of forthcomingness, the Talon tells Robin who he was in life – a Revolutionary War assassin charged with killing a family for the purpose of securing some land for the Court. Unimpressed, Robin shoots a grappling hook through the Talon’s eye, strings him up by a tree and slices him in half with his standard owl-issue katana.

Badassery notwithstanding, it is a little bit strange to see Robin killing so nonchalantly. I know everyone is treating the Talons as morally killable (because they’re reanimated), but the last 8 issues dealt so heavily with Robin’s struggle with his mother and father’s conflicting views on  killing. I’m not going to say something rash like “this undermines the character work of all previous issues!’ but I will log the note that it rubbed against my view of the kid. 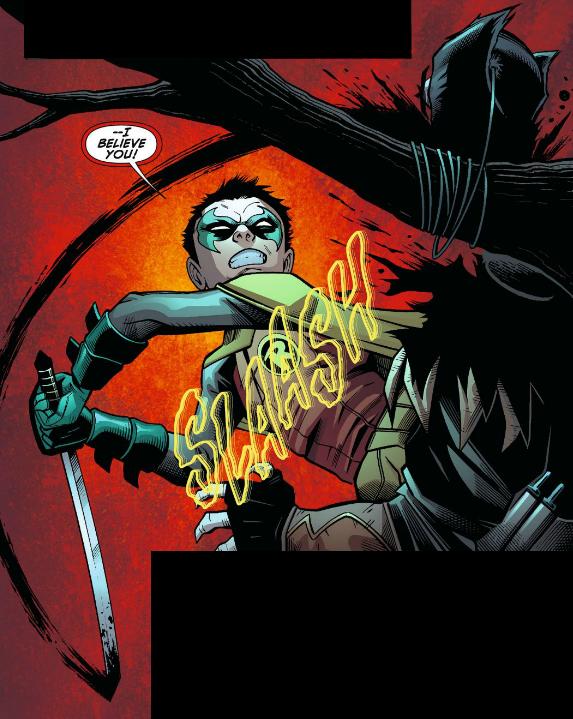 But on the flip side of that, one of things I absolutely loved about Batman and Robin is the extreme agency of Robin. The character is laughably competent in the best-possible way. And I really like that this issue chose to focus exclusively on the latter half of the Batman and Robin equation. That might be dictated by necessity (with a Batman already featuring heavily in like 6 other comic books that supposedly take place in the same night), it was exhilarating to spend some time with Damian as he got his orders and then followed the mission through to completion.

That’s something else that proves to be a delightful change of pace. Peter Tomasi played a really nice long game with the Born to Kill story arch, introducing characters and concepts early on that would pay off half a year later. Which is cool and all, but it was liberating to read the beginning, middle and end of a Robin story in one slim volume. It is especially useful for new characters (like Batwing or Damian) because it’s hard to get a sense of how they “normally” operate when we’re only allowed to see the most dramatic and strange of their adventures. The day-to-day of a superhero may not be the most glamorous thing, but I like seeing it regardless.

Like what was Damian doing in the sewer? If it would make any sense, I’d say that thing looked like a mine sweeper. Or it could have been a metal detector and Damian was looking for rare coins. Regardless, I like imagining that this character has a routine. I have a list of blogs and websites to check daily, I go for a run, I check the mail – Damian sweeps for mines in the sewer. Whatever.

There’s a bit about the Talon’s origin that I’m going to leave up to you to discuss Peter. I wasn’t crazy about it, and it was relegated to a single splash in the last couple pages of the issue. Which, like, that far in, what’s the point? I get that we’re fleshing out that particular Talon – and his connection to his target – but it all sorta adds up to “pointless” if it doesn’t inform any of other the action in issue. Am I off base here, but did the background of the colonial Talon add virtually nothing to the proceedings?

Peter: This issue doesn’t really fit very well in the overarching story that Tomasi has been building in Batman and Robin. While last issue was a good end to any story, and left the future of the book completely open, this issue doesn’t really fit anywhere. However, this is pretty much the Night of the Owls M.O. for all of the Bat-books. Even still, this book does less for me than any of the other crossover books have done.

I do agree that one of the things that I do love about Batman and Robin is the extreme agency of Robin. I liked that this issue drew on Damian’s past…a little. The comparisons made between the Talon and Damian bring up some questions to me however. If this Talon was raised to be a killer, then where did he come from? I was under the impression that many Talons came from places like the circus, or crazy circumstances like balloon bombing. Does this also mean that at some point the Court was not unlike the League of Assassins? I think that this is mostly confusing, and I could have done without it. Also who is that big scary Talon? Is that just a member of the Court? Or is there some sort of General Talon?

I did like that we see Damian’s authoritative side. He instantly takes charge of the situation, and controls the troops with precision. His little quip about how much better he is than a regular soldier fits pretty well in the character that has been established.

The backstory about the Talon’s mission is interesting, giving us some insight into the past of the Court in Gotham, and the extent that a Talon will go to complete his mission for the Court. But again, this really isn’t that eye popping or really that exciting. This issue is pretty much filler so we can know what happens to Damian during the Night. I hope as the Night goes on, we will see the other Allies of the Bat make appearances, most notably I’m hoping for some sweet finale that involves everyone involved in the Night. All and all, not that impressed here. Hopefully it will get better when Tomasi can get back to a continuing storyline.

Also, when the Talon turned his head around, that was just kinda weird…..

8 comments on “Batman and Robin 9”