Drew: Last month, I was pretty hard on Batwoman. The gambit of dividing the story into six discrete narratives necessarily forces the plot to only be advanced incrementally in each. That, I’m fine with, but when every story hit the emotional doldrums simultaneously, the result is an issue that strains to justify its existence. This month, writers J.H. Williams and W. Haden Blackman find the emotional through-line issue 8 was lacking, crafting a meaningful rumination on the nature of loyalty.

(As has become our habit when reviewing this particular arc, I have reshuffled the stories into chronological order.) Two weeks ago, we see Maro summoning Maria’s ghost, chastising her for failing to uphold her end of her bargain. That bargain is to deliver kidnapped children in order to see her own in the afterlife. One week ago, we see Colonel Kane losing his shit as Bette flatlines in the hospital. Four nights ago, we see Chase and Kate learning about Falchion’s secret underwater lair from Sune. Chase threatens her life for details, but Sune only knows that clues might be found in Falchion’s hyper-secure yacht. Kate just so happens to have an invite to a gala on said yacht. Chase insists that she go, and bring Sune along.

The next night, at the party, Sune and Kate attempt to find clues in Falchion’s room. Sune reveals that she was originally Falchion’s concubine, but moved up the ranks when he realized she had a talent for magic. This explains why Sune was so quick to flip on Falchion, but she does one better and explains she only wants to be allied with Kate. When they emerge from upstairs, Maggie is a little jealous, but is quickly called away to deal with another missing child. Jump to now, where Sune, Kate, and Falchion are locked in battle. Kate makes it clear to Sune that they must bring Falchion in alive, but it ends up being Sune that’s mortally wounded. Kate jams an exploding arrow in Falchion’s eye, and rushes to Sune’s side. They kiss.

And just like that, Williams and Blackman have touched on the range of types of loyalty, and the results of that loyalty; from the loyalty we have to employers to lovers to family to ideals. Intriguingly, many of Kate’s loyalties are subverted before the issue is through, as she apparently kills Falchion, as well as retroactively justifying Maggie’s jealousy regarding Sune. Her loyalties have been in question since she started working with the DEO, but it’s interesting to see how that instability resonates through her life. Her decisions are also resonating with her father, whose loyalty to Bette comes off more and more like misplaced loyalty to Kate. As he’s dragged out of her room, he begs her to be a fighter, like Kate. Sure, Kate was a role-model for Bette, but it’s clear that the Colonel wants her to be like Kate in more ways than one.

That thematic unity is carried into the art beautifully as Trevor McCarthy makes his debut on the title. I wasn’t sure McCarthy’s distinctive style would mesh with the equally distinctive style of the book, but he manages to find a very fluid middle-ground that allow both styles to coexist happily. It’s very clearly both a Trevor McCarthy book and an issue of Batwoman, which is no mean feat. His art is so varied and rich in detail that each storyline has its own distinct look. The scenes inside the shadow bomb are a particular standout, but for sheer layout-bravado, I’d be remiss if I neglected to point out “Chase’s Story,” which is presented as a three-page spread, depicting the DEO eagle.

What’s particularly incredible is that these layouts don’t draw undue attention to themselves — I actually didn’t notice the eagle the first time through — which means they manage to support the narrative; enhancing rather than distracting from the story. There are numerous Williams-esque touches like this throughout, but McCarthy owns every one of them.

Even the motif of opening each story with a shot of the central characters’ hands — which at times has felt arbitrary — finds emotional resonance in this issue. Many of the shots are practical, efficient bits of storytelling, establishing the setting or the emotional state of the characters, but it’s the last of these, the one that opens “Batwoman’s Story” that truly impresses me. We see Kate’s hand in Sune’s. Having already established the shadow bomb, we know they are simply helping each other through the murkiness, but it also brilliantly foreshadows the kiss that closes the issue.

As for that kiss, it’s hard to read Kate’s reaction:

Her body language conveys surprise, but I hesitate to say anything else. Sune knows both of Kate’s identities — something she has yet to share with Maggie — so perhaps some emotional closeness isn’t an unreasonable assumption. Then again, Sune may be using Kate, or even conjuring some sneaky kiss magic, so Kate’s reaction may only have an impact on her relationship to Maggie (not that that’s not a big deal).

As if that wasn’t enough stuff to talk about, this is Shelby’s first time writing about Batwoman, and my first opportunity to hear her thoughts (after Patrick and I more or less insisted that she read it), which I’m pretty excited about. So what do you think, Shelby: of this issue, of this arc, of this title? Do you like Kate? Do you wish we were spending more time with her? Are you pulling for Kate and Maggie, or are you happy to see Sune throw a wrench in those gears?

Shelby: Thanks Drew, for that charming welcome to this title! First, I have to say that I really like Kate Kane, both as herself and as Batwoman. I love that she seems to exist in this nebulous space next to but not completely included with the rest of the Bat family. And of course, I’m going to play that gender card I always keep in my pocket; as a lady, I really enjoy reading and writing about strong and intelligent heroines.

That being said, I was really disappointed in Kate for that kiss, I am definitely in the Kate and Maggie boat. I like to see comic book characters (heroes and heroines alike) in legitimate, solid relationships. I can relate to that sort of behavior, and I think a good comic book is one that makes me relate to a character who spends half their time wearing a mask and fighting monsters. Plus, I am just not interested someone who cheats on their S.O. It’s something I can’t understand and just don’t have any patience for. Luckily, before I wrote Kate off as an impertinent hussy, I read the issue again, and now I’m having second thoughts. I don’t really trust Sune, and we were reminded a couple of times how good she is at magic. Kate’s uncharacteristic wandering lips paired with her insisting Falchion be left alive on one page, and jamming an explosive into his eye socket on the next leads me to believe she is the victim of some sort of hocus pocus. Plus, did you notice that Sune and Maro have the same marks on their faces, just on opposite sides?

I don’t like it. Something is up. Between Sune, Medusa, and the DEO, Kate is being manipulated to serve multiple agendas, and I don’t know how it’s going to end for her.

I agree with you completely about the art in this title. I, too, was concerned with how it would go with Reeder leaving, but McCarthy has handled it very gracefully. I think my favorite bit is Jacob’s story. 6 panels in total, it’s short, sweet, and effective. Every panel has the “eeeeeeeeeee” of Bette’s flatlined heart monitor running along the bottom; it puts you immediately in that moment, when you’re trying to figure out what’s going on and your heart is breaking, and you can’t pull yourself together because of that constantly present alarm. And that last panel, as Jacob is on the outside looking in, the reader is forced to participate with him in that moment. The panel is framed in white, and centered on a black page, creating a sort of tunnel-vision moment that we cannot escape from any more than Jacob can. It’s very smart, and very very good. 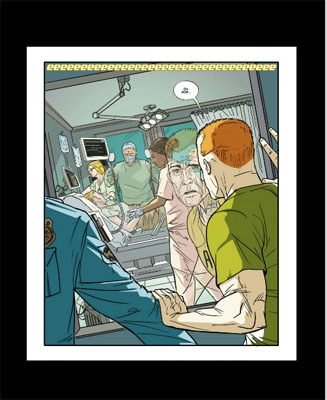 Moral of the story: you guys were right. This is a good title, an interesting and unique title, and I’m glad I’m reading it. I’m super curious to see how this arc resolves. I’ll bet you dollars to doughnuts Kate is being magically influenced by Sune somehow, and I’m sure that all the magic in the world won’t make one iota of difference to Maggie once she finds out about this.