Today, Drew and Peter are discussing Batman Annual 1 originally released May 30th, 2012. This issue is part of the Night of the Owls crossover event. Click here for complete NotO coverage.

Drew: Let’s talk about baggage. Comics (especially comics with 70+ year histories) have a lot of fictional history that fans have long demanded that creators adhere to. DC’s relaunch promised to shake that status quo up a bit, freeing up editors, writers, and artists to keep what works and jettison anything that doesn’t. Of course, Batman being Batman, damn near everything about him worked. Writer Scott Snyder has revealed a lot of new information, largely by focusing on things that aren’t Bruce (or his core relationships), but much of what we knew about Batman has remained true. This makes any changes that are made — like those revealed towards the end of Batman Annual 1 — particularly effective; especially when they play so brilliantly against what we expect.

The issue begins over thirty years ago on a frozen lake in Nebraska, where a young Victor Fries is determined to build a gigantic snowman with his mother. She falls through the ice, terrifying Victor, but survives. Jump to the Arkham during the Night of the Owls, a few hours after Jason apprehended Fries, where Victor is barely tolerating telling that story to a doctor. He inevitably snaps, and stages a cunning escape. He recovers his suit from Arkham’s confiscated items room, and his weapons from the Penguin, and vows vengeance on Bruce Wayne.

Via flashback, it’s revealed that Fries was working for Bruce in Wayne Tower’s Cryonics Lab. Bruce isn’t thrilled with the ongoing cryonics research (’cause gross), but allows Fries to continue. Later, Fries’ conflict of interest is revealed when Bruce finds him making overtures to his frozen wife, Nora, even after Bruce had ordered all of the frozen bodies moved. Fries throws a tantrum, causing the accident that turned him into Mr. Freeze.

Back in the present day, Fries has arrived at Wayne tower, and is looking for both Nora’s body and Bruce. Bruce lures him upstairs, where he confronts him as Batman. During their ensuing fight, Bruce hits him with information both of them already know, but has been cleverly obscured from us: Nora isn’t Fries’ wife. In fact, he’s never even met her. She was a frozen specimen long before he was born. Bruce then uses Fries’ revival formula (which he had given to the Court of Owls, and was hoping to use on Nora) to incapacitate him. The issue closes back in the Nebraskan winter, where a young Victor takes his now wheelchair-bound mother out on the ice. After a brief, pitiful exchange, Victor pushes his mother into the freezing water with the words “now rest.”

HOLY BALLS is that Nora reveal a surprise. As in, Fight Club/The Sixth Sense/The Usual Suspects-level surprise. The coolest thing about it is that almost isn’t even a retcon — for the life of me, I can’t remember ever actually seeing Nora and Victor together. I’m sure there’s something out there that proves that their marriage was canon, but this issue totally jibes with what I knew about Mr. Freeze — or rather, what I thought I knew.

Snyder’s been making a habit of these left-field, jaw-dropping reveals, but equal praise belongs to his writing partner here, James Tynion IV. I’m not sure what the division of labor was, but it’s no matter, everything from the large-scale plotting to the dialogue is fantastic. I loved the neat little details about the precautions they take at Arkham surrounding Fries; the emergency blackout protocol, and especially the water-free crayons they use specifically because he can’t freeze them (to turn them into shivs, obviously).

Jason Fabok’s art carries the story beautifully, capturing Fries’ calculating indifference with the appropriate austerity. That austerity is enhanced exponentially by Peter Steigerwald’s painterly colors. Steigerwald adheres to the cold end of the color spectrum, punctuating scenes with touches of red that carry more and more meaning as the issue proceeds. That device culminates in the closing images of the issue, where the wounds on Victor’s mother’s hands mirror both the apple from the first scene and Mr. Freeze’s signature red glasses.

Those increasingly important touches of red recall The Killing Joke, as does the story’s vacillation between a present-day plot and a villains origin story. Fabok even drops in a match-cut between the present day and the flashback, all but begging for the comparison. That’s intimidating company to keep, but the whole creative team earns that distinction. It’s that good.

My only quibble is that this issue is considered part of the Night of the Owls event. While the owls are mentioned a few times, there involvement here is quite abstract; the Court used Fries’ formula to revive the Talons, but we never actually see any Talons. While it’s neat to chase the lead of how the Talons were revived, it’s not exactly important to their story, and it’s not really necessary in this story. It’s by no means a problem — what we get is an incredible, touching origin story for Mr. Freeze — but its an example of marketing almost distracting from the actual content. I hate to complain about such a stupid detail, but it seemed to warrant mentioning. I don’t know, Peter, did that bug you at all?

Peter: It only really bugged me a little bit. As I read, and especially at the end, I read it more as an aftermath to the Night. Many events and actions seem to suggest this. First, Batman had time to isolate the formula, and perfect it. Second, Freeze had time to get arrested, go to Arkham, see a doctor, break out, get to the Iceberg Lounge, AND break into Wayne Tower, where he was met by not one, but THREE of the Bat Family. I would like to think if this was still the Night, they would be too busy for three of them to spend time going after Freeze. However, we’ve clearly seen that while this takes place in the span of one night, lots of things, including amazing time stretches and people being in multiple places at once are completely acceptable.

I really liked the Freeze backstory. It gave so much life to a character who has been limited in both appearances and character in the New 52. It really gave Freeze a solid past that gives him lots of motivation and direction. His character design is really good too. I like the new FreezeSuit. It reminds me more of a diver’s suit than I high tech space suit. His bare arms lend themselves more to his ability to freeze things he touches, not just use the Freeze Gun. It even looks a lot like Captain Cold’s new look from The Flash. 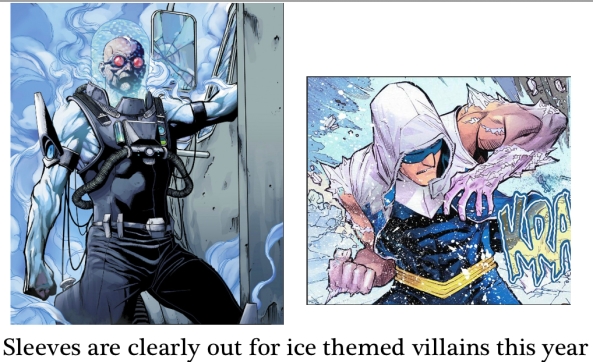 In the past, Freeze has sometimes been portrayed as someone who is only doing what he is doing to save Nora. Now they make him out to be a legitimate psychopath. Someone should have noticed if he was spending his childhood freezing small animals and killing them. O yea, and DUDE KILLED HIS MOM. Also, Nora looks a lot like his mom, Oedipus much?

Check out this shot of the Arkham storage locker. 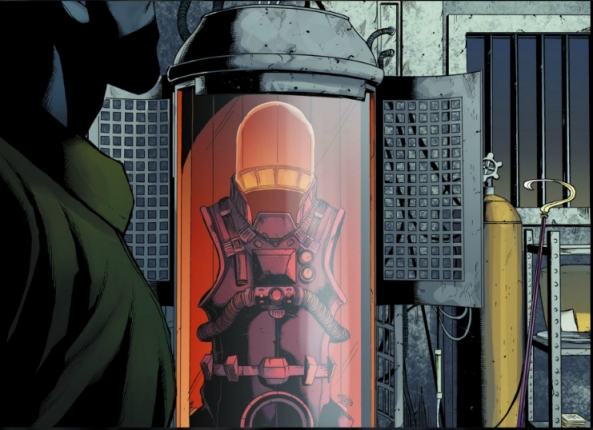 I see Riddler’s staff, Mad Hatter’s hat, and Joker cards. Could this be foreshadowing the events and villains to come? I sure hope so, I would like to see more of the classic Batman villains getting their shot after the Court. Not that I have anything against the Court, but I want to see the classic villains with that New 52 smell.

Lastly, check out this image. 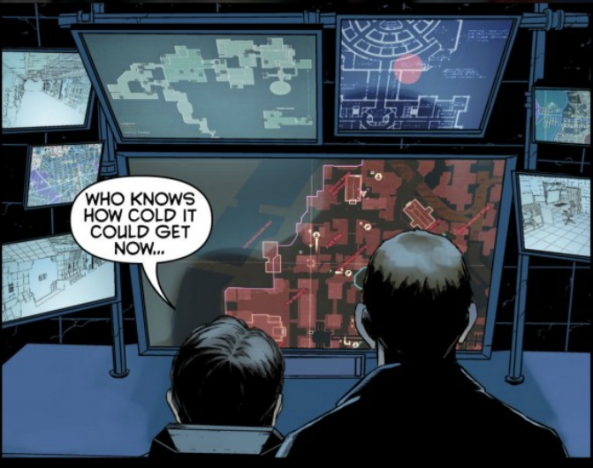 All and all, I really like this issue. The introduction of Freeze as a major player in the Batman backstory is much appreciated, and I hope that they continue with the other classic villains in the future.