Shelby: I didn’t know anything about Dial H when I started reading it last month. The characters were foreign, the setting new, even the physics of the Dial H universe were wholly unknown.  After the first issue, I was excited. Things were mysterious and unique! This is a superhero process I’ve never seen before! I couldn’t wait to know more. Well, China Mieville must have heard me, and decided to cram as much new stuff as possible  into the second issue.

Nelse spends this issue alternating between experimenting as one of the seemingly endless supply of heroes in the Dial and hating himself when he’s not doing so. He also visits with Darren in the hospital to try to figure out why those goons attacked him in issue 1. Apparently, people all over the city are falling into random comas. When it happens, the boss X.N. would send Darren et al to the victim’s apartment to look for any sort of jewelry or documents. Nelse investigates one such apartment as Ctl-Alt-Del, who looks to be composed of binary and whatever language the Matrix is written with. There, he runs into a mysterious redhead cloaked in purple. They fight, he randomly wins, she bails. A steampunk-y masked villain named Ex Nihilo has a mysterious phone conversation while another masked villain mysteriously uses tentacle fingers to get out of handcuffs and heads out to kill Darren. Nelse shows up as Iron Snail to take on the killer, who is called The Squid. They fight, Nelse loses, he bails. The Squid talks to a redheaded doctor caring for the coma patients, she tells the goons to follow Nelse. At the phone booth, Nelse finds the mysterious redhead cloaked in purple, who promises to help him figure his shit out.

There’s a lot going on in this issue, and a lot of it doesn’t make sense. There are three masked villains: one is The Squid, and the other two are probably different people, but both seemingly are referred to as Ex Nihilo by The Squid. I’m pretty sure the redheaded doctor (obviously the mysterious redhead) and the steampunk-y villain are different people. I think… That’s the problem with this series, it’s introducing a LOT of characters and ideas in a small amount of time. I don’t even have a grasp on the physics of this world yet; Mieville is overwhelming me with too much mystery, too much intrigue, too many characters in full masks! 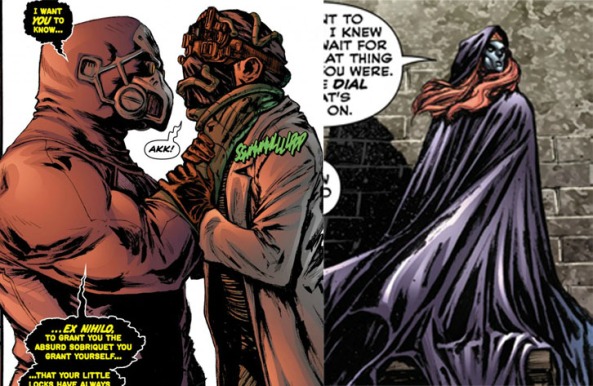 Strangely enough, the least confusing thing about this title is Nelse, who’s only distinguishing characteristic is that he could turn into anyone. He is the least ambiguous of everything: as Nelse, he is just a sad sack of a man, and as a hero he is garish and over the top. One of the things I think this comic does well is pay homage to the corny origin of comic books as a whole. Stylistically, this is a very contemporary story, grim and gritty; hell, half of the characters we met in issue one died. The heroes Nelse becomes, however, are conceptually silly to the point of stupidity and chock full of punny one-liners. 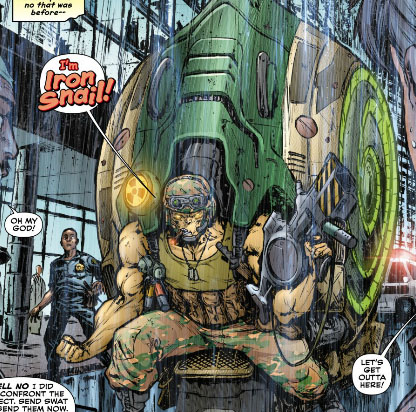 In the comic world Christopher Nolan has created, it’s easy to forget how campy and goofy comic books used to be. I really like the mix of camp and grit, I think it’s done well.

This issue doesn’t see quite the same fragmented panel layout we saw last time, but I still really like Mateus Santolouco’s style. It’s very expressive and unique, and could be a very good fit for this story (I say could be because I’m still not totally sure where this story is going). One page in particular really stands out: Nelse as Ctl-Alt-Del is battling the redhead when she blasts him to the ground. Because his head is a computer monitor, the glass screen shatters on impact, and we see Nelse’s point of view through a curtain of fractured glass shards. It’s clever, and visually impactful. 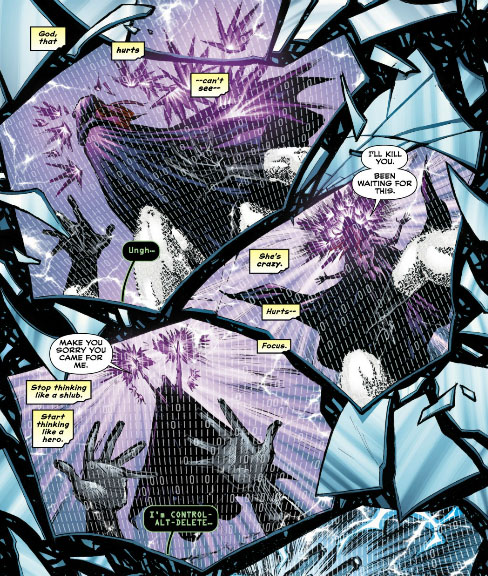 I’m on the fence with this title, more so than last month. There are a lot of things I like about it: I like comparing pathetic Nelse to the powerful heroes he becomes, I really like the artistic style, and I think there are some very smart things happening. There might even be too many smart things happening, so many that I can’t keep track of them. Plus, one of the things I really enjoyed last month was the very natural, believable banter between Nelse and Darren. Now, Darren is dead, and Nelse has no one. I’m hoping Mieville can pull it together, maybe deal with these plot points one at a time. And I’m still hoping for Nelse to dial into a superheroine.

Peter, did you come off this title feeling a little overwhelmed and confused as well?

Peter: I was definitely a little overwhelmed and confused, but I still am relatively happy with this title. Nelse is a character that everyone should be able to relate to in some way. Last issue when he turned into Boy Chimney and Captain Lachrymose, they seemed to reflect Nelse’s character. I really like that. But this issue, all the heroes we see him dial up don’t really have the same connect to him, which bums me out. I was hoping that every time he dialed, he would transform into a reflection of himself. The quiet moments focusing on Nelson, develop a terrific sense of willful detachment from reality. In addition to capturing the desperate need for escapism that so many people feel these days, it sets up a powerful dynamic for Nelson’s character that will surely factor into later storylines.

Just like his smoking, or bad health due to being fat, could all this dialing become a problem for Nelson?

I have this theory that obviously Nelse isn’t the only one who can dial. I get the feeling that everyone except for Nelse can tell when other people dial, and become and hero, (or in the case of The Squid, a villain?). I think that what happened in the apartment with Nelse and the redhead is that CrtlAltDel rebooted her hack to her original form, rendering her powerless. I’ll keep an eye on this as the series continues.

I have really been enjoying this series so far. The crazy shit that comes out of Mieville’s head is just insane. Santolouco does a good job of hiding Mieville’s hand until the right moment, and, for the most part, he does a good job with character design. Also, since while part of the DC line of published books, Dial H is not really connected at all to the rest of the stories. Which is pretty cool. Nelse mentions Superman and Batman, but that doesn’t seem so weird because of the context. Hell, I’d probably mention Superman and Batman in that situation. This book’s autonomy and intense character design is both literally and functionally setting itself apart from the rest of the DC books.