Shelby:  So far, I have been very impressed with Before Watchmen. Minute Men was a great intro to the series, setting us up for a closer look at the slightly old-timey adventures of Alan Moore’s original crime-fighting team. Silk Spectre took things a step further by expanding on a couple of under-represented characters, adding depth to the original story. Comedian, though, takes things further yet: Brian Azzarello counters accepted truths in Moore’s story of Eddie Blake, the Comedian. And you know what? It works really well.

It all starts with Eddie Blake playing a game of football with the Kennedys at the White House. That’s right, turns out Eddie and JFK are totally besties. In the original story, Moore implied that Eddie was the assassin who killed Kennedy. The movie spelled it out plain in the opening credits, with Eddie on that grassy knoll. Not according to Azzarello: he’s got Eddie and the president rough-housing on the White House lawn and betting on football games. Who does Jackie O turn to when she needs someone to take out one “drug-addled peroxide whore”? Eddie, of course. 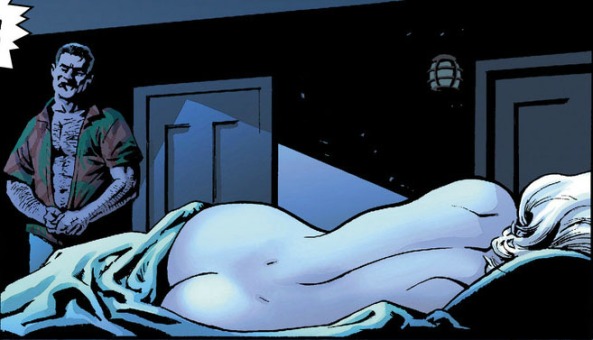 Eddie’s about to hop on a plane to hang out with his presidential pal, when he gets an order from the Director; he’s got to be part of a drug bust. Moloch has apparently upped the ante from prostitution to narcotics, and The Comedian needs to take care of it. He bursts into a warehouse, guns literally a-blazin’, and makes a grand mess of things. Finally, Eddie finds Moloch upstairs, weeping in front of a television. Not only are there no drugs, the President has just been assassinated. Eddie places his hand on Moloch’s shoulder as they watch the news.

There are a lot of really smart things happening in this issue. The biggest one, of course, is that Eddie didn’t kill JFK; moreover, that Eddie was intentionally kept away from the president’s side by another force in the government. Azzarello has done something really clever here. He’s taken something that has been accepted as cannon in Moore’s story and reversed it in a way that reinforces what we know about that character. The Comedian’s shtick is that he knows exactly how terrible the world is. Instead of being beaten down by it, he laughs at the joke of it and joins in. Azzarello’s twist perfectly fits in with Eddie’s view of the world as one sick joke. Even better, Azzarello references that cannon by turning it into a joke about Eddie tackling the President during their game of football.

The other really smart thing Azzarello has done in this book is establish the relationship between Eddie and Moloch. Remember in Watchmen, when Eddie figured out the plan to kill millions of people in order to prevent mutual nuclear destruction? It was too terrible a secret for him to make a joke of, and he turned to Moloch for solace. It always seemed a weird choice, but not anymore. By having these two men, enemies in every other encounter, share this terrible moment, Azzarello builds a rapport between the two that explains why a tearful Eddie would break into Moloch’s house when he couldn’t deal with the world. The last time Eddie had to face something he couldn’t laugh away, Moloch was the one he faced it with. J.G. Jones helps tie it all together with his panel of Eddie standing at the window drinking Moloch’s booze, just like he would again so many years later.

I didn’t expect any issues of Before Watchmen to change an aspect of the original. I especially did not expect such a change to be so well-executed. This issue was smart and impactful and so very good. I am very curious to see where Azzarello and Jones will take this title next. With that, I’d like to introduce our next special guest writer Elliott Serrano, writer for Chicago’s RedEye and Dynamite Entertainment’s Army of Darkness. Elliott, I believe this is your first look at DC’s Before Watchmen, what did you think of it?

Elliott: I really enjoyed the book, Shelby! I’ll admit that the jury is still out for me on this new plot twist with The Comedian and President Kennedy – how many secret operatives end up being friends with the President? – but it does establish an interesting paradigm for the character. The banter in the beginning of the issue showed Azzarello’s knack for writing dialogue that moves the story forward without seeming too expository. The characters felt real and the motivations all made sense. But what I really wanted to focus on was the artwork.

After the fiasco that was Final Crisis (you know, the series that he had to quit mid-run?) J.G. Jones appears to have really hit his stride and brought some of his best work to this mini-series. Jones has to walk a fine line of re-creating the likeness of Eddie Blake and helping him blend in with the likes of JFK, Bobby and Jackie Kennedy. It’s a tough balance to strike when you have to place a fictional character next to a historic figure and make it appear natural. Also, being a period piece, Jones has some serious heavy lifting to do with capturing the flavor of the times. The clothing, the cars, the buildings, were all rendered expertly. I especially liked the images of Walter Cronkite on the television, announcing the tragic events that took place in Dallas in 1963. As someone who’s seen the original footage, Jones captured it effectively.

It’s become quite evident why Didio decided to put together an all-star crews to create these minis. They have a real challenge ahead of them to craft stories that are as interesting and visually compelling as the original Watchmen series. These are stories that will need to be able to stand the test of time. So far, it looks like they’re succeeding.

After the issues he had on the aforementioned Final Crisis, I’m hoping that J.G. Jones can keep the look of this particular series consistent for the inevitable trade paperback collection. In all honesty, I don’t understand why they didn’t just release these stories as OGNs as opposed to floppies. But once they are collected, they are sure to look good on my shelf next to my copy of Watchmen.

9 comments on “Before Watchmen – Comedian 1”