Drew: Watching his parents fall to their deaths; training to be a crimefighter; falling out with his mentor; becoming Batman; relinquishing the Batman mantle once his mentor returned. To put it lightly, Dick Grayson has had a turbulent life. Tension and tragedy are somewhat par for the course in the superheroing world, but coming of age in costume has amplified those difficulties. At the start of the relaunch, Dick had reasserted his identity as Nightwing, and he seemed to have the agency all former sidekicks long for. Soon enough, however, he was being roped into all kinds of identity crises, as his personal and family histories made claims on his future. He emerged from those events with a stronger sense of self, and issue 10 finds him acting with that hard-earned agency, even as a corrupt cop tries to redefine Nightwing in the public eye.

The issue begins with Dick investigating that double homicide where the evidence seems to implicate him. While searching for clues in the victims’ apartment, Dick is ambushed by a SWAT team. Dick makes it out just fine, but it turns out that sting was run by Detective Nie, a cop with a history of trying to frame the bat-family for crimes. Commissioner Gordon can’t get enough on Nie to do anything, but Deputy Mayor Kavanaugh is ready to do what he can to help Nightwing, whom he credits for saving his life back in issue 8.

Meanwhile, Dick is trying to find financial support for his plan to revive Gotham’s Amusement Mile, permanently installing Haly’s Circus as the house entertainment. He has difficulty finding financial backers, eventually turning to the daughter of Tony Zucco — the man who murdered his parents — who seems open to the idea. Dick finds less support from the circus itself, where performers are abandoning ship rather than waiting for the circus to get back on its legs. Dick is also still investigating that double homicide. Tattoos on the victims lead him to a tattoo parlor, which leads him to the Republic of Tomorrow, which is some kind of martial arts cult. Dick is spotted while doing some reconnaissance, and is incapacitated by the Republic’s leader, Paragon.

This issue has a lot of “first issue of an arc” syndrome, somewhat amplified because it more or less kicks off three independent story lines, some of which work better than others. I particularly liked the circus story, which demonstrated Dick’s creativity and optimism in a way we haven’t really seen since the relaunch. Kyle Higgins does a brilliant job tying these plans for the future back to Dick’s past in the form of Sonia Zucco. It’s a clever way to literalize Dick’s negotiation with his past, and a remarkably mature outlook on how we have to accept our pasts in order to move forward.

It remains to be seen exactly how the Nie frame-up relates to the Republic of Tomorrow, but Higgins buries some intriguing details in the investigation. When Dick is grilling the tattoo artist, it comes out that Nie has already been there, asking the same questions. Why someone planting evidence at a murder scene would care who really committed the crime is curious, to say the least. I’m not sure why Nie is so bent on framing Batman and Nightwing in the first place, but it appears there’s even more to the story than that.

The only story that didn’t totally work was the Republic of Tomorrow, but that’s mostly because they’re only introduced in the last few pages of the book. Higgins drops in some hints at this larger organization, from the kid getting tattooed at the parlor to the Alpha/Omega symbol the organization uses, but the final scene seems crammed in to give us a cliffhanger. It’s not necessarily bad, I’m just not feeling it yet. It doesn’t help that, for whatever reason, I’m getting a New Genesis vibe off of this group. It doesn’t seem like this organization could have anything to do with the New Gods, but I get a little nervous when Paragon refers to “the God of tomorrow.” At any rate, it we don’t have much to go on as far as the Republic goes.

Series regular Eddy Barrows is joined on penciling duties by Geraldo Borges, and the two turn in art that features Barrows’ signature angled panels. Those twisting, falling panels can add a real kineticism to action scenes, but often feels out of place during more traditional dialogue. Take, for example, this sequence, where Dick is interrogating the tattoo artist. 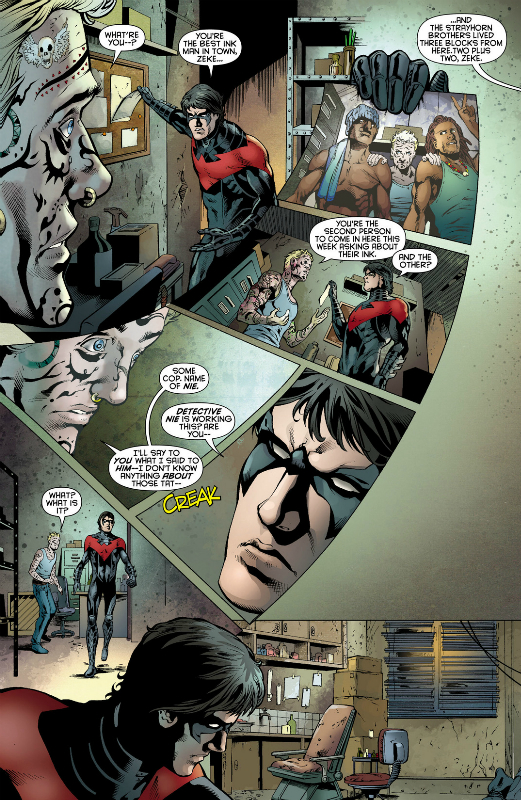 having the subsequent panels stretch out from the photo Dick is holding — as though they were part of a larger photo — looks neat, but I’m not sure it means anything. More importantly, it leaves this whole empty space of to the right that just feels wasted. The issue is peppered with a few moments of awkward close-ups and detail-free colored backgrounds that feel a bit like the artistic team was just cutting corners.

At the same time, perhaps my favorite page of the issue is only possible because of those same techniques.

The staging of that last panel is powerful, if a bit cliched: a low shot focuses on the hero as he struggles on the ground, while the villain looms just behind him. One of the reasons it works so well is because of the flow between that last image and the preceding one; almost a reverse shot, looking down on the scene from a distance. That flow is only possible because there aren’t more details, either on the ground in that first image, or in the background in the second. Abstracted to mere washes of color, the two shots blend into one another, creating a sequence that embraces some of comics more unique narrative capabilities.

Between the art and the writing, I found this issue to be both hit and miss. It’s not a bad issue, but it also fails to live up to the standard this run has set for quality, character-driven storytelling. I have confidence in Higgins to turn this into something great, but in the meantime, this issue felt a little lacking. Peter, sorry to turn things over to you with such a resounding “meh,” but here’s hoping you have a stronger reaction — either good or bad — to this issue.

Peter: Unfortunately I also have a resounding “meh” to this issue. You’re totally right Drew, it does fall into some classic ‘first-issue-of-the-arc’ pitfalls. Higgins seems to want to invest a lot into this new story arc, and it almost works here. It is pretty obvious that he wants to make sure that Dick’s non-crimefighting life stays as a prominent force in this issue. The introductions of new characters that are going to play a large role in this arc, and potentially subsequent arcs is fine. The character of Sonia Zucco is particularly interesting. This is bringing Dick’s life full circle.  She definitely has potential to be around for the long run, maybe even a new love interest for Dick?

Detective Nie could prove to be a very useful and interesting character. With his alleged crime and subsequent history with the Batman is very interesting. Could it be that he planted the Nightwing escrima stick at the crime scene? It would seem a little obvious, given his past, but I’m not ruling it out. As to if he has any actual connects with the Republic of Tomorrow, at this point I’m gonna go with ‘no’. They don’t seem to have any potential connection other than that the Brother’s murders with the tattoo, but that could have just been a crime of connivence. Which begs the question, if Nie didn’t kill the brothers so he could plant the weapon, than who did kill them?

One scene that I really liked about this issue was Dick talking with Jimmy. After the whole Siako  fiasco, Jimmy is really the only named character that is left in the circus. This is a really nice scene with a lot of heart. Clearly, after everything that has happened, Dick seems to be losing his influence in the circus.

As far as we know, Jimmy is the person that Dick knows in the circus the best now that Brian and Raya are gone. I also think that we will be seeing more Jimmy in the future, and, I would bet that if Dick ever gives up the circus, Jimmy will end up with it. Especially since Dick wants to reinvent the Haly’s together.  That clever piece of wording is what sets their relationship apart.

This issue is still pretty good as far as I am concerned. The pitfalls lie mostly around that the fact that it is the first issue of the arc, but hopefully that will change next month.  There was a lot to like here, but not a whole lot to get excited about either. Dick has gone through some major reinvention since last September, and up until now every issue has been exciting and full of awesome. Let’s hope that the Nightwing team can keep it up.