Shelby: I wasn’t totally sold on the first issue of Batman, Incorporated. I hadn’t read any of the pre-relaunch Batman, Inc stuff so I was pretty clueless. And, blasphemy though it may be, I’m not the biggest fan of Grant Morrison. I may have to take it all back, however, as this trip into Talia Al Ghul’s backstory, while not wholly surprising, is interesting and a lot of fun to read.

I’ve never known Talia’s origin story, and I’ve never really needed to. I get it; I get Ra’s and and I get Talia. Morrison does a great job, however, taking us down memory lane in a long flashback sequence. Talia was highly educated and exceptionally trained as a child, but she wasn’t especially loved or nurtured. Ra’s preferred to show his love by buying her whatever she wanted, be it horse, zeppelin, or secret lair below the streets of London. Telling Talia her mother had died in childbirth (false) so he could keep her to himself, Ra’s alternated between abandoning Talia and spoiling her. Ra’s set his daughter up to fall in love with Batman, so they could have an awesome baby to carry on the Al Ghul legacy. As Talia grew older, she began to out-smart all the men in her life; by the end of the issue, she has confessed to her father that Damian is not actually dead, she will continue to fight Batman, and, oh yeah, all of Ra’s men actually work for her now and he is her prisoner. The first time all issue we see Ra’s act like an actual father is after he is placed under house arrest by his only daughter: he tells her he’s proud of her.

While Morrison has done a masterful job telling this story, a good portion of the success of this issue belongs to Chris Burnham for his art. The title page is actually a 2-page spread, alternating between Ra’s carrying baby Talia up a mountain to adult Talia walking down a corridor to answer his summons. When I turned the page and saw this, it actually took my breath away; it’s that beautiful. 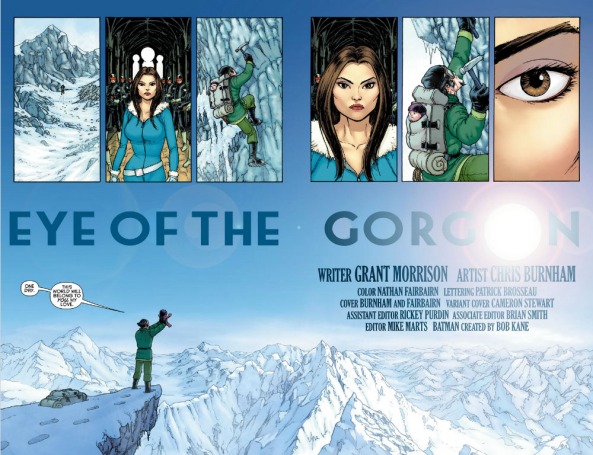 As well outstanding beauty, there’s a lot of charm to be found in Burnham’s art. Whimsy, even: two words that have probably never been used to describe anything that takes place in the Batman universe. I don’t know how he did it, but somehow Burnham’s light-hearted style goes very well with Morrison’s grim story. There are a few panels of Talia working on some chemistry project, mixing potions and whatnot. Every time, Burnham adds some smoke in the shape of whatever it is she’s working on. Again, it seems like it should be corny and out of place, but it isn’t! It totally works! 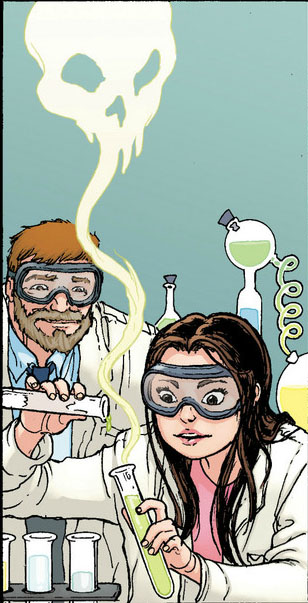 Story-wise, this issue is hard to talk about, because nothing really happens. I’m not complaining, either; my biggest issue with the last…uh, issue was that I didn’t know what was going on. I’m not even all that familiar with Batman and Damian’s relationship, so this quick primer into everything Al Ghul was helpful. Talia is a character I almost never think about, and I like learning more about her, and her father. Batman and the Al Ghul’s have such a weird relationship; he and Ra’s are usually enemies, but their relationship is definitely not as cut and dry as, say, Batman and The Penguin. And Batman and Talia’s relationship somehow manages to be even more complicated than his and Catwoman’s.

I really enjoyed this issue, but I still don’t have a good grasp on how I feel about the title as a whole. Maybe next month we’ll get a better idea of where this title is going and what sort of vibe Morrison is going for. Peter, how did you feel about this issue? Since you are infinitely more familiar with the Batman, Incorporated backstory, were you frustrated by this 2nd issue not really going anywhere, or did you just enjoy it for what it is?

Peter: So at this juncture, this story is so messed up. Between the previous run of Inc., Leviathan Strikes, and this new run, this book is all mixed up and backwards. This issue doesn’t fit here at all. This back up on Talia just doesn’t seem to fit here. Of course, I’m not sure where it does fit, but I don’t think it belongs here.

Last issue had such an intense cliffhanger. I was pretty excited to see what happened. Grant Morrison is a tease. Last issue, Goatboy shot Damian. Now, we get the recap of Talia’s upbringing, the only answer we get is that Damian is not dead, but that’s all we really learn. That he is a pawn. What kind of pawn? Good pawn? Bad pawn? This book doesn’t do much to answer questions, and in fact, probably makes me more confused overall. However, it does give us insight into how she got to be as messed up as she is.

One of my favorite moments is when she is having her conversation with Ra’s.

I think it’s interesting that she is getting all snooty about how Ra’s never listened to what she wanted. It’s not like she’s doing any better! Damian wants to be with Bruce, and she can’t handle that. Maybe it’s because she was so used to getting whatever she wanted that it has just transferred over to her parenting.

Her early interactions with Bruce are pretty interesting. Bruce doesn’t really seem like the type to run around the world saving people if he’s not going to execute everything perfectly. If Ra’s did have a hand in their meeting, I’m not really sure what that is. That could probably be explained a little more. Also, the manipulation that Talia did to Bruce is crazy.

By far my favorite part of this issue, is this shot here. 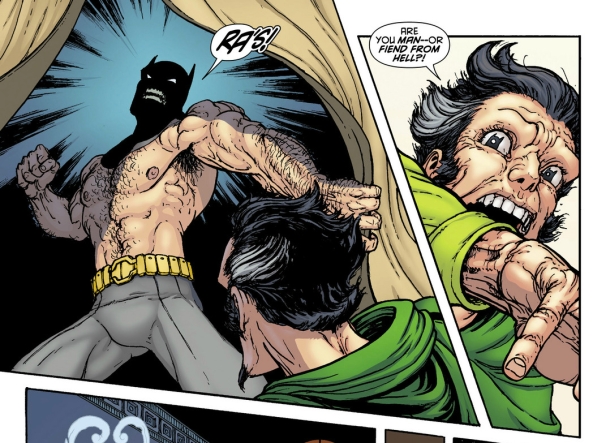 While this doesn’t really fit Ra’s character, (I didn’t think he was ever afraid of anything) it speaks to the combination of Talia’s potion with Bruce’s sheer awesomeness. The fact that Ra’s of all people, the man who has been almost dead and brought back several times, is calling someone a fiend from hell. His eyes look CARAZAY. But it fits the scene really well.

I’m still not totally sold on this series. The HUGE amount of unanswered questions, both from last issue, and the entire previous series are staggering. I have no idea where this is going right now. The Batman Inc. idea is really cool, and could be an extremely cool book to read. I’m just not sure it’s working out right here, right now.