Peter:  Alan Scott’s sexual orientation has been quite the hot topic lately. But Alan’s transformation into the Green Lantern of Earth-2 brings with it many more interesting and surprising developments than just the one hot-button issue. As Earth-2 slowly repopulates with costume heroes, he will certainly be playing large role. The character has been pretty much completely redone with the New 52, which means we have a total reinvention of the Green Lantern side of his character. But there is no way I am going to spoil that on the home page.

The action begins amid the wreckage of the train Alan and Sam where traveling on. Alan is awoken by a voice. In true Moses-like fashion, Alan is talking to a big green flame. But not just a green flame, but a Green flame, with a capital of ‘G’. Alan finds out that Sam is dead, and there is nothing that can be done about it. It is his time, time for him to for him to take up the power of the Green and defend the world from a coming threat of great magnitude. He is given his power, a new costume, and transforms the ring he was about the give to Sam into his ring, his Green Lantern ring.

During Alan’s Moses-moment, Jay has a conversation with Hawkgirl. They tussle a little, and then Hawkgirl shows Jay that everything around them is dying. We soon figure out that it is caused by The Grey (also with a capital ‘G’).

Elsewhere, the avatar of the Grey arises. Grundy is back. 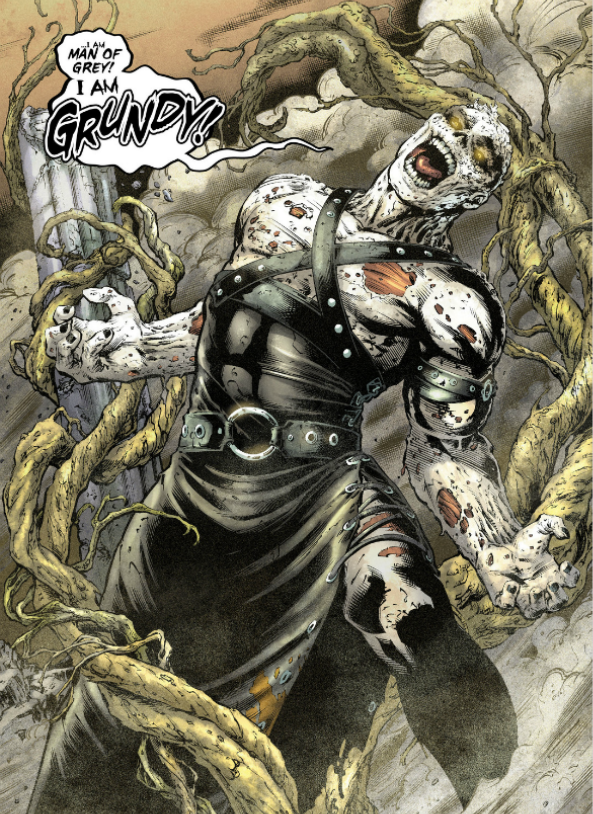 So that’s a complete reinvention of the entire Alan Scott mythos. Sure, the character’s gay now. But he also no longer commands the power of the Starheart – he’s an agent of The Green. I would venture to say that this is more game-changing than making him gay. The Starheart was an item of limitless power from outer space. Now Alan is pretty much just another avatar of The Green. Does that mean his power levels will be lowered? Also, the idea that he wasn’t the first to wield this power is cool, but does that mean he isn’t the first Green Lantern for Earth-2 either?

Alan’s large emotional connection to the cause is pretty cool. It is obvious that while he has some thought of vengeance for Sam, he also has strong moral obligation to fight for justice. Alan has been a big advocate of saving the world, doing what he can when he can. It’s almost the old Spider-Man-ism: “With great power comes great responsibility.” Alan’s determination to use his powers to make a difference stands in contrast to Jay’s outlook. Mercury gave Jay his powers, and gave him marching orders, but Jay doesn’t show the same moral compass that guided Alan (even before he gets those powers).

I do like that his powers look the same. Traditionally, Alan’s power-ring has often projected green flame. I always liked that, not just because it looks cool, but it also does a nice job of distinguishing him from the Silver Age Green Lanterns. The new uniform doesn’t really help sell that distinction though. He looks just like another member of the Corps. The old school cape and red shirt with lantern was a good look, too bad they changed it up. I mean they could have kept some of the old costume elements from the old suit and incorporated it into the new look. Jay’s new design did this, and the new Flash looks great.

I like the idea that Grundy is the avatar of the Grey. Normally, the Grey is just that: the grey area between the Rot and the Green that originally gave birth to Grundy. It’s kind of like the Black Lantern; it brings people back as zombies-like creatures with a vendetta against the living. Grundy’s look in Earth-2 has been revamped as well – less hulking brute, more sleek bondage. Also, the fact that he has beaten and KILLED the previous agents of the Green before makes him even more daunting.

Jay’s story is small, but also plants some seeds. Hawkgirl introduces him to the coming of the Grey, and what it is capable of. This is obviously leading up to a team up of at least the three of them. (New Justice Society???)

There are some interesting layouts in this issue. Particularly, I like these sets of before-and-after panels that start off green and alive and then turn grey as they die.

This book has moved to the top of my Second Wave pile. Every week it brings something great and new to table that keeps me wanting more. Next month we get a tease of the Earth-2 Atom. Who will that be? Will he also be the same Atom that we saw in the Free Comic Book Day? Or new Earth-2 Atom. Also, I want to know what happened to Mr. Terrific from last issue, and his confrontation with the other Mr. Terrific, who may not be that terrific.

Patrick: Oh right, I forgot about Mr. Terrific. Honestly, I think there’s enough cool stuff happening in these pages that the series could benefit more from simplifying it’s narrative rather than complicating it. You suggest that we might be a few issues away from the formation of a new Justice Society, and that seems like a pretty safe bet to me too. And while that necessitates the introduction (and often, reinvention) of classic characters, I worry about this series’ focus being pulled in too many directions. The end of this issue teases ‘The Atom’ next month – and while I’m a big fan of that character, I just don’t want this book to become overstuffed.

As far as who that ‘Atom’ will be, I hope to high-heaven that it’s Ray Palmer. I loves me some Ray Palmer. Someone mentioned in this space (it might even have been you, Peter) that Ray played a role in the early-going of the current Firestorm. I hope that doesn’t take him out of the running. I sorta doubt that’ll be the Atom from the Free Comic Book Day Issue. For starters, we don’t see any other Earth-2 heroes in that gatefold. For secondsies, is it just me or does this Atom look like she might be a lady?

Who do we know that is a lady and can maybe use those powers? JEAN LORING is who. Let’s speculate like maniacs on the identity of both of these Atoms in the comments.

I find Earth-2 fascinating from a mythological standpoint. Like you, I’m interested in the new forms semi-familiar characters take, and it’s extra-compelling to make them function in a world without the Big Three heroes. But I gotta harp on the dialogue writing a little. Alan’s chat with the Green Fire employs the kind of elevated language I expect from an Alan Moore book, but with none of the grace. The conversation also skims right over Sam’s death – Alan doesn’t object at all when the Fire says “My task was only to protect you…” What a shitty benevolent force of nature. It’s kind of a stretch to believe that Alan would have accepted this so peacefully.

And the meet-fight between Flash and Hawkgirl is filled with stilted, weird dialogue. Let’s just look at this one panel:

First of all, her answer isn’t ‘glib’ – it’s laughably self-serious. Then what’s up with Jay babbling about where they are in Poland? Doesn’t fucking matter dude: she can fly and you can run across oceans. And lastly, there’s the “Maybe you will [believe in fate] when you meet the guy.” The guy? Is she trying to be mysterious or did she just forget what she was talking about? It makes for a lot of words on the page, none of which say much of anything.

But that sequence does have some rockin’ art in it. I like it when an artist can find a way to express a non-visual characteristic of a superhero through a simple drawing. You’ll see this a lot in drawings of the Flash in motion, usually multiple images give the illusion of moving really fast (this scene employs this a couple times). It’s less common to see it from characters like Hawkgirl, but look how collected, regal and in-control she appears in this panel:

This too is simple, but using her wings to fill the space above Jay totally sells her dominance in the scene. Also, there are some striking colors throughout this issue. Colorists Alex Sinclair and Pete Pantazis manage a) a scene lit by a sentient green fire; b) a duel between heroes at sunset; and c) a grey and dying Washington DC – all three of which require totally distinct color palettes.

Hey, here’s a question: is Grundy the same as “Solomon Grundy?” (Born on a Monday, christened on Tuesday, etc. etc.) Obviously both characters have a strong connection to death and grotesque-rebirth. But the revamped design calls a lot of other death-characters to mind: namely Black Hand and Anton Arcane. I hope Robinson is intentionally combining traits of similarly themed villains to stream-line this universe. And it makes sense – because his heroes’ origins are similarly pastiches of the hero-origins we’re already familiar with. Alan is sort of a Green Lantern, but he’s also sorta Swamp Thing. Jay is sorta the Flash, but he’s also got the powers of a god (like Wonder Woman).

Oh and I don’t want to make a big deal about it, but why did Alan’s dreamy boyfriend need to die? Alan seems adequately motivated to fight crime and save the world (more so once he got that set of powers), there’s really no need to throw this loss on top of it. I’m racking my brain right now to come up with another superhero origin that starts with the death of a romantic interest, and it’s just not coming to me. It just feels like hollow lip-service to the gay: yes, there’s a new gay character, no he won’t be engaging in meaning relationship.