Today, Patrick and Drew are discussing Curse of the Crimson Corsair 1-6, originally released June 6th (in Minutemen 1), June 13 (in Silk Spectre 1), June 20th (in Comedian 1), June 27th (in Nite Owl 1), July 4th (in Ozymandias 1) and July 11th 2012 (in Minutemen 2). It is also available for free on DC’s Source Blog. Curse of the Crimson Corsair is part of DC’s Before Watchmen prequel series. Click here for complete Before Watchmen coverage (including release dates).

Patrick: If there’s one part of the original Watchmen I never quite got behind, it was the whole “Marooned” story. I’ll concede its many virtues: 1) that Moore envisioned what the comic book industry would look like in a world where actual superheroes were common place; 2) that the darkness of the story provided chilling barometer for the global psychology under the threat of nuclear war; 3) that the artist for the books was conscripted to help design Ozy’s squid monster, thus unifying horrors expressed both within the story and the story-within-the-story; and 4) that the protagonist’s decision to sacrifice the bodies of crew to achieve his goals parallels Adrian Veidt’s decision to murder half of New York City to spare the world from nuclear annihilation (with a similar loss of humanity as a result). I CONCEDE ALL THOSE POINTS. Still, I find those portions of Watchmen remarkably dull. Turns out “Pirate Comic Loosely Related to Watchmen: The Next Generation” inverts that formula. The results aren’t great.

The biggest, most obvious part of the problem is that the story is insanely broken up into 2-page installments. Each installment ends on something of a cliffhanger, which is an impressive feat. But as we’ve only now (at the end of issue 6) met the titular Corsair, this means we’ve basically read five shaggy dog stories. Leastwise, they sure feel like shaggy dog stories… let’s lay ’em all out here and see what shakes out.

Issue 1: Gordon McClachlan (which is a fucking mouthful of a last name), as part of a new crew aboard Captain Lemuel Chane’s ship The Pendragon, takes up the defense of a crewman that nicked extra rations of rum. Cap’n Chane hears the defense but sentences Quentin Vole — the crewman in question — to be keel hauled. Issue 2: Seaman Vole’s corpse is pulled back on board and McClachlan’s conscience gets the better of him, so he objects. It’s a shitty mutiny though, because the crew isn’t dumb enough to turn on a captain that will kill a dude for stealing a little rum. Issue 3: Cap’n Chane — evidently doing what he loves most in the world — sentences McClachlan to fifty lashes. While this punishment is dished out, the Pendragon is attacked by a Spanish ship. McClachlan, tied to a canon for his lashing, is pulled overboard during the attack. Issue 4: McClachlan swims to the surface to discover that the Spanish ship sunk the Pendragon. He finds a suitable piece of wreckage to float to safety on – but it’s already occupied by the corpse of one of his crew members. McClaChlan keeps his friend’s coat, but discards the body to the ocean. Issue 5: McClachlan battles a shark. Issue 6: McClachlan is rescued by a ship captained by an individual calling himself “The Crimson Corsair.”

I have precious little to say about this story. I don’t see much of a theme forming here, let alone a theme that ties into the events in the main-issues. And the art, while competent, is basically your run of the mill, modern comic book fare. It could be argued that this is the point: Marooned employed art typical of the era in which it was produced. So perhaps the decision to make the artwork as innocuous as possible is an intentional nod to the way American comic books look right now. 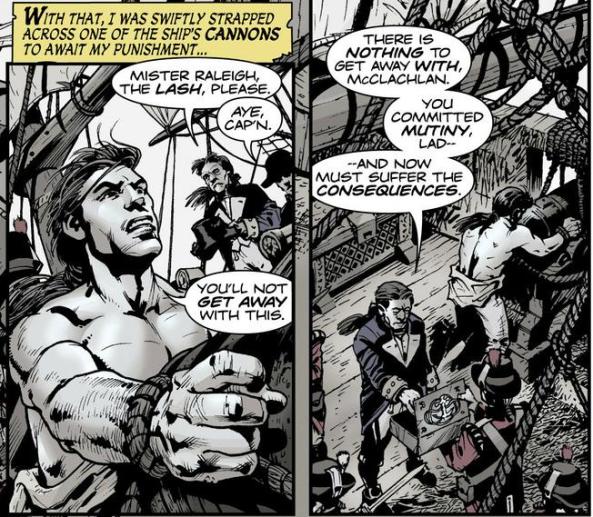 “BUT, HOLD UP!” you shout, “IS THIS A STORY WITHIN THE STORY OR SOMEHOW A COMIC THAT WAS PUBLISHED 30 YEARS AFTER THE EVENTS OF WATCHMEN?” Hey, guess what – I don’t have an answer for you. There’s nothing to suggest that Rorschach could stroll down to the newsstand and pick up this story, and both the art and 2-page-issue format make it hard to believe this as anything but a bullshit extra tacked on to something that is already going to sell.

Something I find absolutely ridiculous: there’s a title graphic and a “to be continued” graphic in each issue. So that’s a crazy amount of page-space just lost redundant titles. I had originally considered that this story might play better in trade, and while it probably will, there’s no way around ever-other-page being a title page.

The story also relies on near-constant voice-over narration. This is something the original series did too, so I guess it’s true to the source material in that regard. But, Jesus, it makes even something like a shark attack boring. Show, don’t tell. And I get it – two pages isn’t a lot of room to show much of anything. Maybe shouldn’t have tried to tell a heavily serialized story in 2-page increments then, huh? 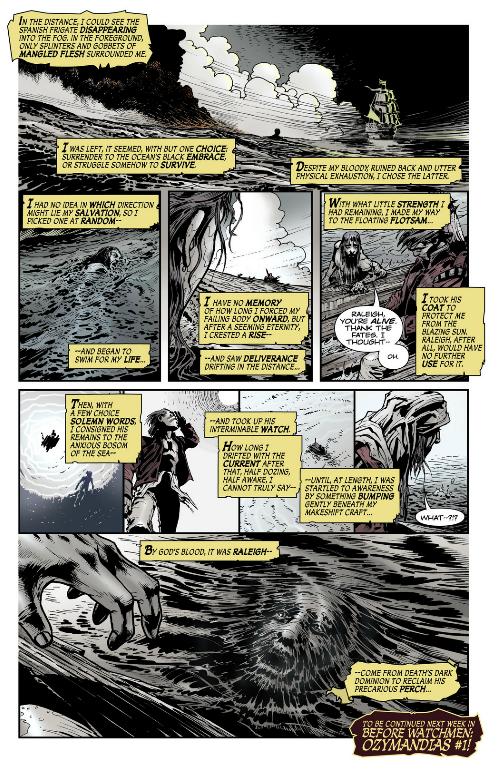 I’m mostly not even reading these any more. For the purposes of this article, I read them all (naturally), and I realized that the last one of these I had read was #3. There’s just no point to these things.

Drew: You mention a lot of compelling reasons for the existence of the Marooned story in Watchmen, but for me, the only one that really matters was the thematic tie-in to the rest of the story. It was mostly just Moore doing that flashy Moore thing he does so well, but it allowed for some pulpy narration that could obliquely comment on the world we were seeing. Without that, the Curse of the Crimson Corsair is really only left with the other stuff I think of when I think of Marooned, namely: being the annoying pirate story that periodically interrupts the action. There being no point to these things is dead on the money, unless you think annoying pirate stories that periodically interrupt the action are an integral part to telling a Watchmen story.

Patrick’s right to point out the weirdness of this being a real-life version of a book that only exists in a fictional world. It’s like the Bernie Bott’s Every Flavored Beans of the Watchmen universe; it seems kind of cute to make this tiny world detail real until you realize how awful a vomit-flavored jellybean actually is. It ends up only having kitsch value, which to me, doesn’t make up for the fact that it kind of sucks.

Perhaps that’s a bit unfair — Wein and Higgins do nail the tone of this thing, but are they writing as Max Shea (the fictional author of Marooned)? Or as Moore-as-Max-Shea? Or does this writing team exist in the Watchmen universe? In leaving these (admittedly stupid) questions unanswered, the story feels like an exercise in trying to write a pirate story like Moore. I suppose there are worse things to do in life, but it also takes the series perilously close to fanfic (though I guess the only thing separating canon from fanfic in comics is if it gets published).

I suppose my biggest issue is that this series feels entirely unnecessary. That’s a criticism that could be rightly leveled against the entire Before Watchmen experiment, but at least the main titles can claim to be adding context to a beloved universe. As a comic book that exists in that universe, the only context this series can hope to impart is that Marooned wasn’t the only pirate comic book in that universe, which duh. Watchmen makes that pretty clear, though I’m sure Moore only neglected to offer more examples because he’s such a lazy, incompetent writer. OH WAIT.

It’s telling that Patrick’s only images demonstrate 1. how boring the art is, and 2. how much text there is. I doubt that those titles and “to be continued” text boxes will appear whenever this is inevitably collected (those are generally removed in TPBs), but the starting and stopping doesn’t make for a very pleasant reading experience for the people who are PAYING TO READ IT NOW. Serves me right for buying it, I guess.

Sass and negative feedback loops aside, Patrick’s strategy of just skipping these seems like the best policy. I’m not getting anything out of reading it — at least not in two-dense-but-forgettable-page increments at a time — so I can’t recommend anything else. Avast, I guess.