Patrick: Darwyn Cooke is going to make the absolute most out of his Minutemen mini-series. The first issue served as an effective mission statement, nodding politely to the series’ legendary origins but striking out boldly with its own voice. But now with all that business out of the way, Minutemen 2 is able to start telling stories. STORIES! Can you believe it?

The issue opens in 1962 with Hollis and Schexnayder discussing the manuscript for “Under the Hood.” Naturally, Larry’s not happy that the book reveals so much dirt about the whole gang. “What kind of dirt?” you ask?  Hollis happily obliges by narrating the story of a botched smuggler-busting mission in 1939. They got some bad intel, and instead of intercepting drugs or guns or whatever, the whole team of superheroes charged in to destroy a shipment of fireworks. Oops! But thanks to some quick thinking from Schexnayder and the always-charismatic Captain Metropolis, they’re able to convince the public that they stopped weapons from falling into the hands of their enemies. I could see where Larry wouldn’t want that story to get out.

But then the issue does something strange: it skips ahead in time about a year and Hollis’ narration disappears completely, as if to suggest that this one’s not making it into “Under the Hood.” The Minutemen are in the middle of a team meeting, which appears to be routine by this point in their history. Schexnayder wants the group to focus on high-profile, fun and sexy adventures, even if it means ignoring Silhouette’s case of missing children (‘cuz, what a bummer, right?). Silhouette, Nite Owl and Mothman bail on the after-meeting drinks to follow a lead. The trio winds up at the site of freshly vacated circus where a young boy disappeared from the Midway three days previous. Investigating a nearby abandoned building, they discover a body hanging from a noose.

But there’s more. Watchmen implies that there was a sexual relationship between Metropolis and Hooded Justice. This issue not only confirms this, but also explores how that might have been a problem for the group. Schexnayder even suggests that Sally pretend to date Justice to throw the press off their obviously-gay scent. There’s also a cute scene wherein Dollar Bill and Comedian are drinking in the conference room and overhear a little bit of a lover’s spat between the heroes. 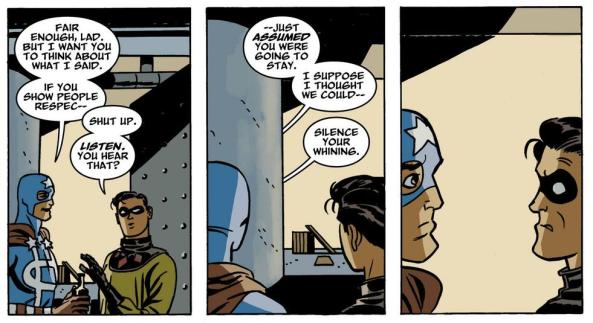 We talked a lot about gay Alan Scott on this site. I don’t want to speak for everyone else, but that whole reveal seemed like a wasted opportunity to me. I get that there’s value to having a gay character whose sexuality is a non-issue, but I would also be interested in reading the stories that spin out of that issue. One sure-fire way to make it impossible to ignore a homosexual relationship is to set a story in 1940. The fact that Larry’s cool with it, but also like totally not cool with it, is interesting to me. Further, he makes a little joke about not being able to ask Silhouette to beard for Justice – it is apparently public knowledge that she’s gay, but that doesn’t present a problem for the image of the group. And that’s something that extends to comics in general – no one makes a big stink when lady characters kiss or hang out together in their underwear (Harley and Ivy, I’m looking at you), but there’s something earth-shattering about two dudes in capes making out.

But I love all this. I love that there are stories that Hollis is telling and stories that he’s not telling. It’s a twist on the old “unreliable narrator” trope, and it speaks volumes about Hollis’ character that he would reveal one set of secrets while keeping another. He’s looking to have the group absolved of their collective sins by confessing them, but the individuals in that group are still his friends – people he cares about. I’m also really looking forward to getting resolution on this children-kidnapped-from-the-circus story; the corpse that’s hanging from the rafters is so horrifying that Hollis is going to keep it from his book.

SPEAKING OF THE CIRCUS, what’s going on in that flashback sequence? It’s 1920 and the circus is in Germany. A young boy stumbles through a frightening circus alone. And then he sees a lone figure walking out of the mist. 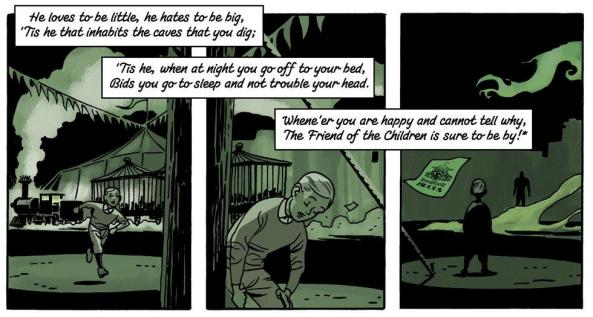 That helpful little asterisk indicates that this text is from the Robert Louis Stevenson poem “The Unseen Playmate” from the collection Child’s Garden of Verses. It’s about the power of a child’s imagination, but paired with these panels of a child in danger… shit, that’s creepy.

How you feeling about this, Shelby? Darwyn Cooke is basically an unknown entity for me, but this is making me think I need to just pick up everything with his name on it. The way he captures unique voices for each of Minutemen and follows multiple stories after the meeting breaks up is nothing short of masterful. Also, his art (as you can see above) is so simple and expressive – versatile enough to catch the subtle OMG moment between Dollar Bill and Comedian and joyful, bombastic action sequences (as below).

This is my new favorite issue of the prequel series…. at least, until Silk Spectre 2 comes out.

Shelby: I’ll admit it, I was underwhelmed with Minutemen 1. It wasn’t bad, but there wasn’t anything new about it. Cooke definitely steps things up a notch here, and I am enjoying it immensely.

I’m so happy you picked that panel, I think it’s my favorite in the issue. There’s so much action, so much movement in the art, and I love the glee on Silk Spectre’s face as HJ pulls her on to the tank.

There are a lot of interesting things happening between the characters here, the most obvious being the various homosexual relationships we have going on. I’m going to disagree slightly with your take on “ladies kissing is fine, dudes kissing is gross” opinion. First, I don’t think it’s common knowledge that Silhouette is a lesbian; I kind of got the vibe that Mason was hitting on her when they were on patrol. 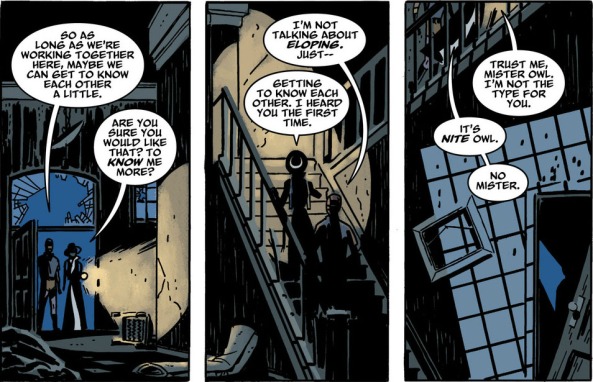 I think Larry knows, and by extension Sally knows, but that’s it. No, I think the real problem lies in the fact that not only are HJ and Metropolis a couple, they work together, and can’t really keep a lid on it. The only thing Larry cares about is the group’s image; if Silhouette can sleep with ladies and no one is the wiser, he doesn’t give a shit. But the boys have a hard time keeping their relationship a secret, which is something we already knew from Watchmen. And, let us not forget, eventually Silhouette will be brutally murdered for her sexuality, so some one was definitely not ok with it.

What I really loved about this issue was the audition process. It was exactly as ridiculous as that sort of thing would be. The best part, though, is poor Mothman almost didn’t make the cut!

This title is really coming together and turning into something special. The stories are spot on: Cooke uses just enough of what we already know to keep everything grounded in the Watchmen universe, but still delivers something new and interesting. The art is charming and appropriate, the style matches perfectly the pulpy, serial tone of the story. The most disappointing thing about Minutemen is I have to wait 5 more weeks for my next installment.

11 comments on “Before Watchmen – Minutemen 2”