Drew: In their write-up for issue 10, the siblings Ehlers described the “To Drown the World” arc as one about the power of belief. That summary somehow seemed too simple, given the chronological gymnastics that dominated our discussions. The emphasis on the chronology has eased off as the arc draws to its close, taking it out of the realm of gimmick and back to the much more common device of alternating between A and B story lines. What we’re left with are the themes the Ehlers so readily pointed out — how the lies we tell ourselves and others shape the way we perceive the world. I don’t know if it’s intentional or ironic that my faith in the creative team lead me to believe in vain there was more to the narrative gimmickry, but it establishes a fascinating meta-theme for the arc.

The issue begins with Batwoman confronting Sune/Maro, who is a bit drunk on power after killing Falchion. He/She explains this was all part of her plan, and there’s nothing anyone can do to stop her. As she sets to teleport the kidnapped children somewhere, Chase shows up and tries to shoot Sune/Maro. Kate naturally objects, and zaps Chase with some taser gloves, causing her shot to only wound Sune/Maro, who teleports away with the children. This leaves Chase and Kate in the flooding lair, but they get out with only a little interference from Croc. Chase surfaces to find Maggie, who’s sympathetic to Chase’s newfound hatred of Batwoman.

Meanwhile, back at the hospital, the doctors are preparing to harvest Bette’s organs. Colonel Kane makes one last impassioned plea for Bette to wake up — this time with the aid of her own mask — which miraculously works. The next day, Kate and Maggie begin to share a bit about their pasts. Kate shares a bit about her family, but conveniently leaves out that whole “I’m Batwoman” thing. Maggie reveals that she has a daughter who lives with her father in Star City. The issue ends with a strange epilogue, where Sune/Maro delivers the oddly happy kidnapped children to some unseen monster called “Mitera.”

If that summary sounds more like that of a normal narrative than an issue of “To Drown the World,” it’s because the issue acts much more normal than these have been. Gone are the opening panels focusing on some small detail; gone is the thematic unity of each individual story; gone are the huge leaps in the timeline. Almost all of the action in this issue happens “now,” aside from the “Kate’s Story,” which takes place “the next day,” and the scene with Maggie and Chase on the docks, which confusingly happens both “now” and “fifteen minutes from now.” I’d always been skeptical that J.H. Williams III and W. Haden Blackman could keep all six stories spinning the way they set out to in issue 6, and while it’s disappointing to see that idea fall by the wayside, turning to a more traditional timeline gives the conclusion much more impact.

I was particularly impressed with “Kate’s Story,” which cleverly emphasizes the “story” of the title in Kate’s not-quite-the-whole-truth version of her past. The fact that she discloses that she kissed someone else (even if she’s not totally honest about the details) indicates that she wants to tell the truth, but a secret identity (that Maggie just so happens to hate) is a different kind of lie entirely. Maintaining that lie may be as important to Kate as honoring the truth about her sister. That kind of complex relationship with the truth makes that scene incredibly ambiguous, though — Kate’s essentially using a big truth to distract from a bigger lie.

It’s a great performance, and is only carried off through Trevor McCarthy’s brilliant acting. I’m particularly taken with how Kate’s posture in that scene conveys her casual closeness with Maggie. 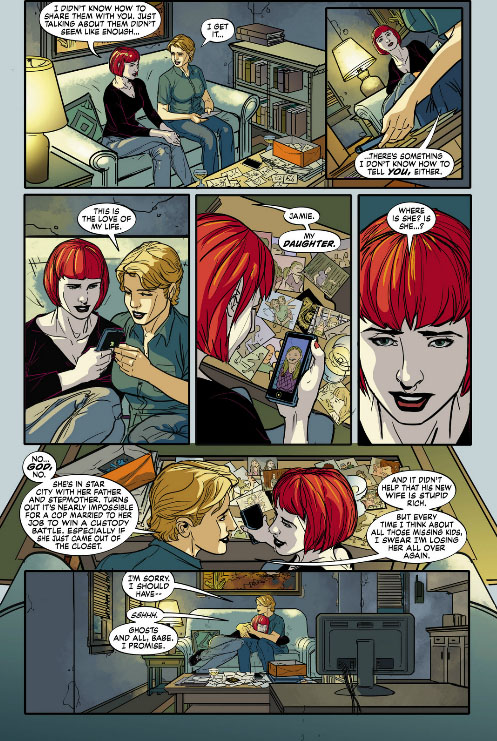 McCarthy doesn’t draw a ton of attention to it, but Kate is clearly relaxing, even as she draws into a near-featal position in that third panel. It’s an ambiguous posture, that can convey either comfort or closing off. It looks like Kate wants closeness, but she still has to maintain that lie. The blocking here matches that perfectly, showing us what we know, but also allowing us to imagine what Maggie sees.

McCarthy also works to mitigate the contrasts in approach to the six individual stories I noted about this issue. He gives each character their own border and panel style, one that seems to represent their subjectivity. Jacobs are clean and simple, but set over a grey background, representing his own uncertainty in his actions (a detail that is mirrored later in “Kate’s Story”). Chase and Maggie’s layouts are surprisingly similar, perhaps representing their own illusions about the nature of their subjectivity. Maro’s panels are demarcated by thick, overlapping lines, suggesting that, as with his magic, what creates the effect isn’t nearly as important as the effect itself.

Batwoman’s boarders and layouts are the most dynamic, starting and ending with that classic Williams style, but taking an intermission for the inky, swirling borders that appear whenever the Weeping Woman is involved. 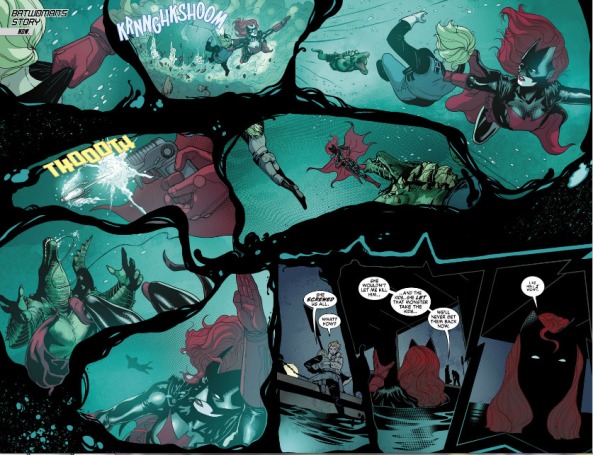 While it was always clear these types of changes were related to the action, I hadn’t considered that they represented Kate’s experiences. This effectively recontextualizes all of William’s run on the title, meaning I’m going to have to (get to) go back and re-read everything to try out that reading. It would be a chore if I didn’t know I was going to enjoy it so damn much.

It’s strange that I like this issue as much as I do. It doesn’t so much stick the landing Williams and Blackman set out for it as it does redefine “landing” in mid-air, but that landing works well enough. It doesn’t demonstrate the most planning, but I’ll take the awareness to cut losses and salvage over crashing and burning any day. I have no idea what to make of that epilogue (which kind of muddles the whole idea of this being any kind of conclusion), but I’m looking forward to the next arc. Is it weird to hope something is less ambitious?

Shelby: I’m not wild about the epilogue, only because it forces the idea this arc is concluded. What did we accomplish, exactly? A few days spread out over 6 issues, the main plot device being the disappearance of kidnapped children, and it concludes with the children being more missing than ever before? This is either a bold move to upend convention by ending an arc with a loss on the part of the hero, or a very unsatisfying ending. I’ve read this issue a couple times now, and I’m still not convinced I liked it.

I’m also a little relieved the multi-story weaving is at an end. It was an interesting way to tell a story, but I also found it to be distracting and difficult. Not just to read in the moment, but for story retention as a whole. I sometimes struggle with remembering what has happened month to month with comics, and this was one of the titles I found to be the most challenging, simply because the story was doled out piecemeal in the wrong order. This is frustrating because I like Kate Kane a lot. Like Batwoman, she is a realistic woman struggling with her personal relationships as they intersect with a fantastic secret life. I love the conclusion of Kate’s Story; the family photo sharing time, the “I don’t want to keep any secrets from you” confession, I’m a sucker for those reality-based, character building moments. I even liked Bette’s story: not because I liked seeing her get hurt, but because you almost never see the actual, physical repercussions of what these people do at night.

That is what this title boils down to. It’s challenging, and occasionally a little awkward in its execution, but I really enjoy it for the same reason I enjoy science fiction novels and the TV show Supernatural. It’s a perfectly balanced blend of reality and fantasy.

As to that epilogue: I couldn’t find anything about “mitera” or “gios,” which is what the monster call Maro/Sune and the children. Wikipedia did lead me to Echidna, known as the “mother of all monsters” for the simple fact that she literally gave birth to most of the famous monsters found in Greek mythology. She was half-woman, half-snake, which matches what we’ve seen of this entity so far. This, paired with the children’s seemingly eager attitudes towards her, make me very excited to see this inevitable conflict play out.