Patrick: John Stewart was a member of the United States Marine Corps, but he’s never been trained in counter-insurgency. Kyle Rayner was an artist, but he’s never done freelance work designing a website. Hal Jordan was a test pilot and just like the early astronauts, he wowed the world with his bravery in the face of the unknown. Whatever the relaunch did accomplish, it utterly failed to update the Green Lanterns of 2814. None of them are creatures of the 21st century. And it is in that spirit that we meet the newest Green Lantern: a middle-eastern born American citizen, who grew up in a post-September 11th America and who was laid off when his Dearborn, Michigan automotive manufacturer shut down in the economic collapse. Simon Baz is interesting less because he’s new and more because he’s current.

Simon’s out one night, stealing cars — because that’s what he’s been reduced to — when he discovers an armed and ticking bomb in the back of his most recent score. The police chase after him (it is a stolen vehicle, after all) and Simon knows all too well what it looks like as he’s speeding around with a bomb in the back of his van. Plus, that timer is ticking down with a persistent little beep. So he makes for the now-abandoned factory that once employed him so the bomb can go off with as little death and damage possible. But then the cops pick him up.

Three days later and it’s clear Simon’s no longer in police custody. A pair of federal agents interrogate Simon, insisting that he’s withholding crucial information about his terrorist plot to detonate a bomb on American soil. Things are about to get ugly (like water-boarding-ugly) when a particularly spazzy Green Lantern ring bursts through the walls and selects Simon Baz as its new bearer. The freshly minted Green Lantern escapes and the agents place a call to Amanda Waller. Cyborg and Batman intercept the call and start to wonder “hey, yeah, has anyone talked to Green Lantern lately?”

Leave it to good ol’ Geoff Johns to sort of ignore his own publisher-mandate for zero issues. This is effectively “Simon Baz: Secret Origin.” Generally, I’m pretty down on origins, but I love the ultra-modern factors that go into this origin story. It is remarkable how effectively the first two pages of this issue tell the story of growing up in world suddenly imbued with a fresh new breed of institutionalized racism. That first page in particular, where the Baz family watches the attack on the World Trade Center play out on their TV, is particularly effective. Perhaps it’s more testament to the power of the images of that day – I know they’re seared into my memory. With a heavier hand, the sequence could have been disastrous, but the page is presented without dialogue, the setting identified only as “Dearborn, Michigan. Then.” and a single image of the Twin Towers reflected in young Simon’s eyes. 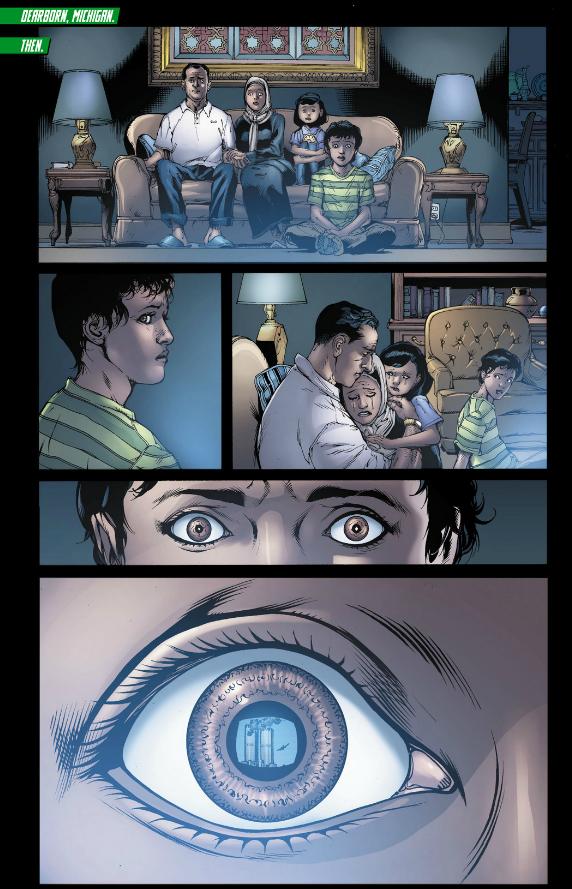 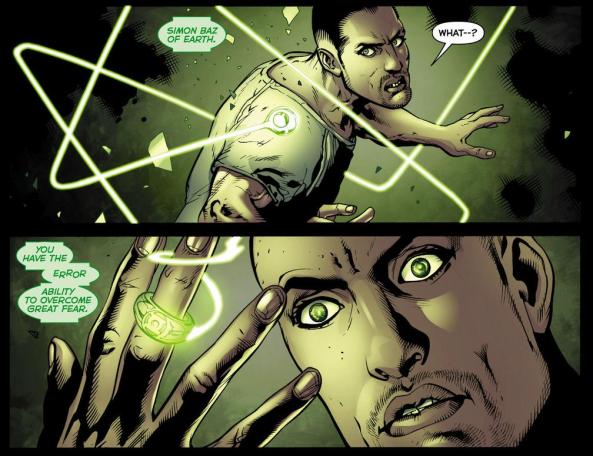 It feels like it’s way too early to make any judgments about this character, or what his introduction means to the Green Lantern universe. I’m expecting most of the zeroes to charm me with stories from the past, but Green Lantern has no time for such diversions – we got a damn epic to tell. Which is actually sort of awesome. As a fan of Geoff Johns’ complete run on Green Lantern, I’ve seen a lot of Hal’s history – both his early days of ring slinging and his youth. Simon brings a freshness to the franchise that I welcome with open arms.

And that’s not to say that everything here is perfect. The agents spend a little too long just sort of talking about who Simon Baz is in the interrogation room for my liking. We get some clarification on his relationship with his sister’s family and  hints that he’s semi-responsible for his brother-in-law’s death, but a lot of that information is more touchingly teased when he calls his sister when he’s evading the cops. The one thing the interrogation does well is show that Simon’s a smart guy, compassionate guy… who also steals cars. Look, nobody’s perfect alright?

What’d you think Shelby? Has Simon done enough to make you forget about Hal and Sinestro for a damn second? OH SPEAKING OF – there’s a single-page epilogue to this issue that serves no other purpose that to assure you that Johns hasn’t forgotten about them. No idea what to make of that – though you gotta love the Charlie Pace “Guys, where are we?” moment. 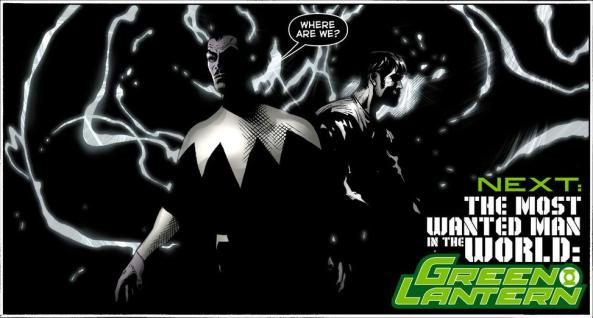 Shelby: The title of this issue is “The New Normal,” and I was really struck by how quickly that title slams this new Lantern home. We are one of the last generations to remember before 9/11, one of the last generations to know what used to pass for normal; you didn’t have to arrive at the airport 2 hours early and your family could walk you to your gate, you didn’t worry that every unattended backpack was a literal disaster waiting to happen, and Arab-American citizens didn’t have to worry nearly as much about people being afraid to sit next to them on a bus. You know me, I love plausible superheroes; I want to be able to read a book and not only understand, but believe the world it’s set in. A grounded, realistic setting can give us more relateable characters, as well as make their fantastic feats that much more fantastic. Plus, I’m still a dumb kid at heart, I want to believe in magic and powers and heroes and monsters. What Johns has done with his simple introduction of Simon Baz is very elegantly brought Green Lantern into our lives, our REAL lives. I look forward to seeing how this new character, with his new normal that we all now live in, will affect the fantastic, alien-ridden, universe-destroying reality of the Green Lantern world. And if there is anyone who is not going to take any shit from the Guardians, it’s this guy.

I was also really impressed by the work Doug Mahnke did on the art in this issue. Patrick, you already brought up that incredibly powerful and simple panel of the Baz family; what really got me were Mahnke’s preference for narrow, tight close-ups in his panels. My favorite is this one of Simon simply looking at the police (and really, out at us), as the abandoned factory he accidentally car-bombed burns behind him. 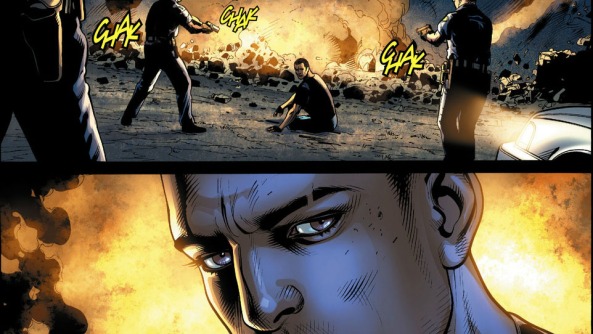 The acting in that bottom panel is superb, especially considering how little Mahnke has to work with. With just Baz’s eyes, we see sadness, regret, resignation, all in that skinny little panel. Not only is all this emotion pouring out, it’s pouring out directly at us, the reader. Baz, this character so grounded in our reality, is sharing these emotions at us, involving us in his story. I did forget about Hal and Sinestro for a second, until I saw Sinestro in his clown suit trapped somewhere that is probably related to the Black Lanterns somehow.

Johns and Mahnke have done something really special with this issue. Green Lantern has been clipping along at a fairly quick pace these last few issues, but this issue still managed to kick things into a higher gear, as well as breathe new life into the franchise. I look forward to seeing how this changes not only the Green Lantern universe, but possibly the way writers and artists approach their characters across the DCU. This could kick off our very own new normal.