Patrick: We’re going to do a little something different here today with Supergirl 0. Siri (while a fabulous writer in her own right) is a working actress in New York City. If you’ve ever listened to one of our Cram Session videos, then you’ve heard her acting chops at work. So when Siri suggested to me that we have a less of a stuffy, academic, boring conversation, and more of a fun, lively free-form conversation, I said “hey, that hurts my feelings.” Then we reached a compromise: recap the issue (as usual), then make a list of discussion points and film our conversation. Well, let the great experiment begin.

Because it’s a Superman family book, Supergirl 0 opens during the final days of Krypton. Zor-El performs some super-secret experiments on his daughter, Kara, from his lab in the middle of nowhere. Y’see, Zor-El has been heeding his brother Jor-El’s advice regarding the impending apocalypse, and he’s been pouring all of his science into giving Kara a viable escape plan (and possibly some physical augmentations? It’s not totally clear). For reasons that never really coalesce, Zor-El hasn’t spoken to his brother in months, so Kara has to act as embassador to the other side of the family – she even holds the infant Kal-El in her hands.

As the Kryptonian Armageddon grows nearer, Zor-El presents his daughter with clothes bearing the family crest: the iconic S. He’s also doped her or something, so Kara passes out. Just then – on a tip from Superboy – Zor’s wife, Alura, bursts in, demanding answers. Answers to questions like “why the hell are you putting my daughter in that rocket pod?” Convinced that even his own wife would find him doomsday theorizing heretical, Zor-El launches Kara into space.

Here’s what I want to talk about:

Siri: And here’s what I wanna talk about:

Patrick: And here are those images we referred to in the video.

From 7:30 – Baby Superman has that cute hair curl. 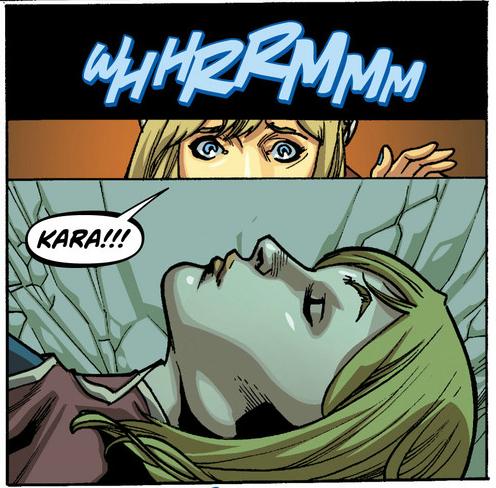