Shelby: Geoff Johns is a big picture kind of guy. When he gets an idea, it’s a big idea. This plays out well in trade paperback collections of his story arcs, when you can read them in great big chunks. It doesn’t always work so well in the monthly issues; when a huge story is dragged out over months, the pace slows and it’s hard to keep that big picture in your mind. I think Johns found a solution to the problem: just write an issue with a story so big it spans all the oceans, treat it like the opening scenes of a movie, and give your artists plenty of elbow room.

The issue starts with a familiar scene: Arthur in the hospital at his father’s deathbed. We get the whole “mobbed by reporters, jump into the sea,” and then Arthur just swims. He’s looking for Atlantis, to find his mother and deliver his father’s final message to her. On the way, he PUNCHES A SHARK, learns he can control sea creatures, and saves a fisherman and his daughter from crashing into the shore during rough seas. Arthur happens to mention he’s looking for Atlantis, because it’s where he hangs his hat and all, and the fisherman offers up a… well, fisherman’s tale about a man pulled out of the ocean named Vulko who claimed to be Atlantean. So Arthur swims to Norway to find him, and sure enough, Vulko was none other than advisor to the Atlantean throne. Turns out, after Arthur was born, his mother Atlanna was forced to remarry and had another son, Orm. When Orm was 12, she died “under mysterious circumstances” and Orm became king. Vulko gives Arthur a map to the First King’s armory (where he and the Others find the artifacts) and a necklace made of stones from the First King’s crown, and together they swim to Atlantis.

First, let’s just get this out of the way:

Dude just punched a motherfucking shark. That is just dumb enough that I love it.

I wasn’t kidding in the intro when I said this issue felt like a movie. The scenes in the hospital and with the reporters are our cold open. Opening credits roll as Johns displays the issue credits one per panel; we get a full spread of dialogue-free panels of Arthur just swimming around. I can almost hear the haunting, Jon Brion piano score. 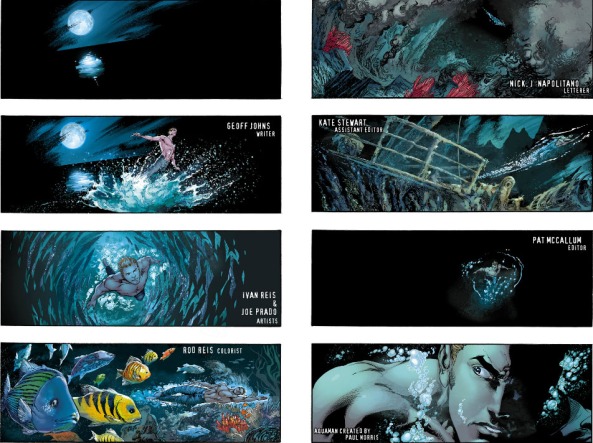 Look at how gorgeous that first panel is! So simple, so elegant. Just as we are lulled into complacency by the opening credits, BAM! The action hits hard with a shark, a storm, and a treacherous rescue. This movie script treatment of the story transforms a pretty straightforward origin into something a lot grander. Johns is putting us in an epic mindset. As curious as I am to see how things turn out with the surviving Others and Black Manta, I would really like to see a mini-arc, in this movie style, that tells us the full story of Arthur’s time in Atlantis. How long was he there? He obviously left to get the artifacts, but why didn’t get go back once he had the trident? What was his first meeting with his little brother like? A full Arthur origin arc would be really satisfying, plus I don’t mind a break from Angry-Face Ya’wara and Frownsies Mera.

This wouldn’t be an Aquaman review if I didn’t gush a little bit about the art. Joe Prado and Ivan and Rod Reis really have worked magic on this title. The action is clean, the pencils expressive, and the coloring sparkles off the page. I know I’ve used that phrase before about this title, but I gotta keep saying it; it’s all just so pretty.

This title has been touch and go. We’ve really liked Aquaman as a terrible team leader, and kind of a dick. The Others has given us new and very intriguing characters, with the added nerdiness of having them all based on old-school comic hero archetypes. But the pace has often lagged, and our favorite gal Mera has not shone like we want her to. I think we are finally seeing Johns’ idea for Arthur come together; sadly, Patrick, I don’t think he’s going to end up being the villain of his own title. I feel like that dubious honor is going to go to Orm, especially considering the upcoming Throne of Atlantis crossover with Justice League. Even still, what did you think of this issue? Did you get the same movie-vibe I did?

Patrick: Yes, absolutely: movie-vibe. Geoff Johns’ work often gets the dubious praise of being “block buster.” And that Hollywood cinema style comes with a lot of promise and a lot of baggage. Like, you’re pretty much guaranteed a clear story, with an obvious hero, an obvious villain and an obvious goal. And you’re also guaranteed spectacle (punching a shark!). But if you want to explore the depths of a character’s mind, or what it means to be a hero, or some kind of metatextual issue, you’re probably going to want to apply elsewhere. And that’s not to say that Johns’ work is dumb – it’s not: the man is capable of near-genius level plotting.

It’s sorta weird how little happens in this issue. There’s that fun bit of ocean adventuring, which I really liked (can’t say no to punching sharks and rescuing ships from storms). But Arthur and Vulko spend like a third of the issue just talking about Atlantean history. Yes, the information imparted in this conversation does establish some high personal stakes for the forthcoming battle against Atlantis, but the information is cold and detached. Vulko claims to be able to recognize Arthur from his eyes (he has his mother’s), but nothing Vulko says suggests that he knew her at all. You know what I mean? If he could only recall one pointless detail, their relationship could mean something – and by extension, his discovering Arthur could also mean something. It’s telling that the usually super-expressive Reis/Prado team has a hard time selling Vulko’s emotions in this scene: they don’t have all that much to go on.

The man’s been waiting for over a decade for any sign that there was hope for his lost civilization, and here he is surprised to see eldest son of a Queen he loved. I don’t think I’m asking for the moon to want to be moved by his expression. As it stands, he’s just sorta… there… there to act as an info-dump.

I guess I don’t really care about the story of “how Arthur found Atlantis.” I think the most interesting stuff in the issue is tossed off as incidental: alone in the world, Arthur goes to the one place where he’s powerful — the ocean — and just drifts for a while. It’s hard to say just how long the Aquaman sows his wild oats, but I could read pages and pages of directionless undersea adventures. The man is isolated, and he ‘s got all this strength. But no matter how many ships he saves (or sharks he punches!) nothing can bring his father back. Aquaman doesn’t need to convince me that his mythological origins are interesting, he needs to convince me that his psychological origins are interesting.

Shelby, you mentioned that we’ve been sorta hot and cold on this series, and I think that’s largely because it focuses so heavily on plotting. In Green Lantern, there are enough well-defined characters to bear the weight of that exposition – to say nothing of the fact that the universe of Green Lantern is huge enough to accommodate EVERYTHING (Also ANYTHING; also ALL THINGS). But Aquaman feels like it should be more personal. At it’s heart, this is the story of a kid trying to understand where he came from. It’s a concept so sad and familiar that secret kingdoms, magical artifacts and all the rest of the crazy bullshit kind of gums up the works. When it’s working, the plotting is breathless; but when it stumbles, it’s exhausting. The last page of this issue is a marvelous full-page drawing of Atlantis. But the banner at the bottom speaks volumes.