Shelby: What more is there to know about the origin of Superman? Krypton blows up, baby Kal-El is loaded into an escape pod, crashes to Earth as the only survivor of Krypton (except for his cousin Supergirl, but that’s a different story), and becomes Superman because science. I have never stopped to think more about Superman’s story; turns out, there are a lot of details I’ve been glossing over. For example, what exactly caused an entire planet to blow up in the first place? Scott Lobdell gives us a clue to the destruction of Krypton, and decides the best place to start the origin of Superman is with his father.

Jor-El is basically the best, most badass scientist Krypton has to offer. In a fancy science suit he made himself, he descends to the center of Krypton to confirm that the planet is dying, and no one can stop it. On his way back to the surface, he encounters a sentient green goop that can apparently eat through his suit. No time to go back down and check it out; apparently he wasn’t supposed to go down in the first place, and has a mountain of paperwork to deal with. Dumb red tape: always getting in the way of science. Later that night, Jor-El’s wife Lara surprises him with the news of a baby on the way, but the celebration is cut off as the science center is blown up. Jor-El figures somebody’s out to get him for his discoveries just in time to find his wife held hostage by a group of cultists who work for the Eradicator, who wants to end … just, everything. Lara is as big a badass as Jor-El, and a fight ensues. All the baddies are dispatched, and Jor-El and Lara are left to deal with the fact that they are bringing a baby into a dying world. In the epilogue, the Herald rises to warn his lord, the all-seeing-all-knowing-alpha-and-omega Oracle, that for the first time a dying planet has been given a second chance, in the form of Krypton’s last son, Kal-El.

There were some things I found a little confusing in this issue. The narrator would be the primary one. Page one establishes the narrator as Superman; I didn’t think anything of it, assuming he knew this story because he just did. The last page, though, gives us the “how do I know? BECAUSE I WAS THERE, OK?” reveal. 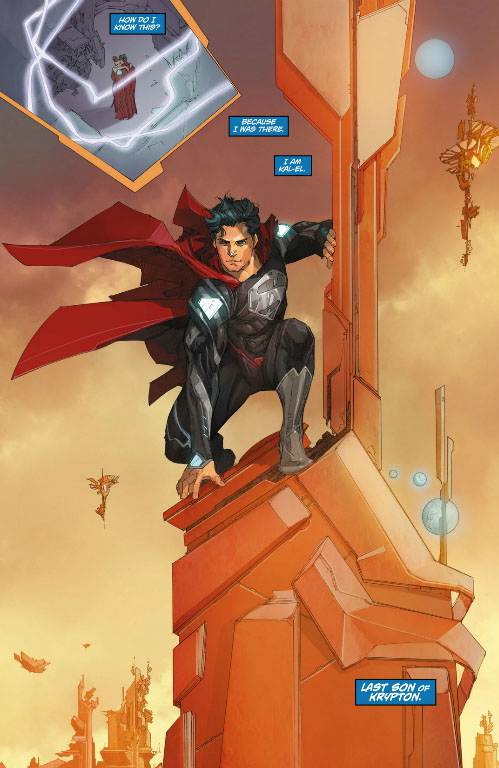 So, wait, what? That’s our man Clark, on Krypton as a young adult, in Kryptonian garb. So…is Lara pregnant with Kal-El, or is she pregnant with some sort of super brother? This could be something as simple as time travel, but then I would imagine Kal would be in his Superman garb, instead of that crazy Kryptonian fashion. Maybe there’s just something from the current arc that I’m missing that explains how Clark is narrating his own origin despite being in the womb at the time.

This story actually brings up an interesting point about Krypton. Disclaimer: I don’t care for Superman and have never read any Superman titles. Even still, I have always had the idea that the Kryptonians were an extremely advanced race, both socially and scientifically. I think that’s probably still true, but instead of their extinction being some sort of tragic natural disaster, I think now that they just fell victim to their own hubris. In Superboy 0, we get the story of the Kryptonians deciding to clone themselves some laborers instead of doing their own menial jobs, and it came back to kick them in the ass. This issue paints the Kryptonians as victims of some sort of entropy entity, but that entity is directly working against Krypton’s best and brightest scientist, a rebel who does what he wants for science! Lobdell seems to be saying that Jor-El represents Kryptonians at their greatest: their greatest intelligence and their greatest pride in their own intelligence, which is ultimately their undoing.

For me, the shining star of this title is Kenneth Rocafort’s art. I like his jagged and asymmetrical panel layouts; they add a certain tension to every scene by making things feel on edge. I love his watercolor pastel style, which transforms landscapes into sweeping, breath-taking vistas. This panel of Jor-El descending to the center of Krypton is absolutely my favorite.

The center of the planet should be claustrophobic and dirty. This is a vast, rich environment, contained not by panels but by expanses of white. Outside of what Jor-El is seeing, there is literally nothing. The image, crumbling at the edges in the space Jor-El doesn’t see,  seems to represent the danger to his planet; it’s right there, but on the periphery, something he can’t see until it’s too late. It’s visually unique, thought-provoking, and just gorgeous.

As excited as I am for Rocafort’s work, I’m even more excited to introduce my guest writer, Pete Peterson. You all can call him Pete, but I will call him Dad. So, Dad, what did you think of this retelling of Superman’s origin? It certainly went back further in time than I expected; were you prepared for a trip to Krypton?

Pete (Dad): Forgive, gentle readers, a certain amount of age-induced naivete and ignorance that will no doubt be made obvious in the comments to follow.  I was tickled not only to be asked to write, but to be chosen to write about Superman; along with Archie and his pals and Casper the Friendly Ghost, Superman was the title I looked for when, as a lad, having saved my nickels and dimes, I ran to the revolving comics rack at Renner’s Drugstore in beautiful downtown Gaylord, MN on Friday nights. How the comics have changed!  Except for the occasional dalliance with underground comics in 70’s California, I haven’t picked up a single comic issue since, and, as this month’s story came to a close, I found myself wanting more.

And I wholeheartedly agree, Shelby, that the artwork in this issue is gorgeous.  I’m amazed at the way Mr. Rocafort creates EPIC scenes on these small pages.  I was fascinated by the artwork’s influence on your perception of Jor-El’s limited world view.  And I am most certainly curious (curious enough to make the trek to Uncle Sven’s to buy the next issue? Probably) about Kal-El’s role in this story.  How is it that he shows up as a young adult with a subdued version of the Superman logo on his chest watching from a vantage point on what is clearly pre-explosion Krypton?

And yes, I did expect a return to Krypton, but something more akin to a sort of review of the sketchy details surrounding the circumstances preceding Kal-El’s arrival on our beloved Third Rock (the planet, not the series).  What we’ve received, though, is nothing less than a brand new story about the forces that caused Krypton’s destruction.  Here, good readers, is where the metaphysics hits the fan.

The cult that apparently destroys the facility and support staff that Jor-El could have used to save his beloved planet, and that, but for Lara’s pugilistic skills, would have destroyed our three heroes, seems to be well organized, with a sharply defined chain of command.  Its goal seems to be to convince The Omniverse of the inevitability of its demise as part of a process Arana names: entropy. Entropy is the tendency of an entity to lose its ability to use its energy to do useful work, and to descend into a state of disorder. (And no, folks, I’m not talking about New Jersey).   Jor-El’s former college chums seem to be applying the scientific principle of entropy to the metaphysical state of life as they know it on Krypton and perhaps beyond.  Science tells us that entropy can not be stopped without the application of an outside force; the cultists’ role is to prevent Jor-El from becoming that force, in order that their Supreme Being, The….ORACLE, can fulfill that role.  Why does The Big O want to be the entropy stopper?  Here’s where the metaphysical lifting gets heavy, folks.

I believe that what Mr. Lobdell is leading us into here is a metaphysical tour de force, a reference to the origins of Good and Evil, Yin and Yang, that will serve as a backdrop for Kal-El’s exploits in his pursuit of (as they used to call it in MY day), “Truth, Justice, and The American Way.”  After reading this issue, my perceptions of Superman’s good deeds have changed—from applied goodness to absolute, pure goodness.  No longer will it be enough to be thrilled that Superman saved the orphaned waif from being splattered by the runaway locomotive;  now I’ll have the satisfaction of knowing that evil has been dealt another blow, and the forces of entropy have been at least temporarily opposed.  I think we all need a dose of that sort of thinking—thanks, Mr. Lobdell.  See ya next month, Kal-El.