Shelby: It’s not easy meeting someone for the first time. There’s a lot of business you have to get through before you can get to the really interesting stuff. All of the “where are you from? what do you do for a living? etc.,” stuff is boring and awkward, but it’s also necessary to establish base for the relationship. Even though this is really the second issue of Talon, we’re still firmly in the “getting to know you” camp. That means a lot of exposition, and while it doesn’t make for the most compelling reading experience, I find I’m really intrigued by what I’m learning about this new addition to the DCU.

The issue opens with Calvin sky-diving into Gotham. He generally avoided Gotham like the plague, because of that whole issue of an all-powerful secret society trying to kill him, but since reading about the Night of the Owls in the paper, he needed to see for himself if the Court was really defeated. If the Court was gone, he could live like a normal person again. He breaks into their H.Q., triggering an alarm being monitored by an old man across town as well as a surprise attack from another Talon. A fight ensues, and Calvin flees to an abandoned train station to…well, I’m not sure what his plan was, since the station used to be controlled by the Court. Anyway, the Talon follows him, and another fight ensues. He stabs her through the head and zaps the knife with a tazer, which is cool. The old man shows up to take the wounded Calvin to safety. Turns out, the old man is Sebastian Clark; when he was a boy, his father wrote a Court of Owls tell-all, which ended poorly for everybody involved. Sebastian had devoted his life to building up the resources to take the Court down; with their weakened state and the arrival of Calvin, he had a perfect opportunity. Calvin suits up, ready to be the Talon to tear the Court to shreds.

How is it I never considered that Calvin would not be privy to news about the Night of the Owls as it was happening? I don’t know why, I just always assumed Calvin was aware of what the Court was up to, which of course he wouldn’t be. Another thing I hadn’t considered: the Court would still be active.

Maybe I just didn’t put enough thought into where this title was going to go. I really like the idea of Calvin as Talon, facing off against the Court’s remaining active Talons. This gives us opportunity for secret, political machinations, as well as totally bad-ass fight scenes: can’t really complain about that. Scott Snyder and James Tynion IV have obviously put a lot of thought into where they want to take this character, it’s just unfortunate that the story is so exposition-heavy. I don’t know that there’s a better way to do it, we’ve got a lot of information to get through before we can really start adventuring.

Guillem March’s art is not my favorite; he seems to prefer crazy eyes and angry mouths. 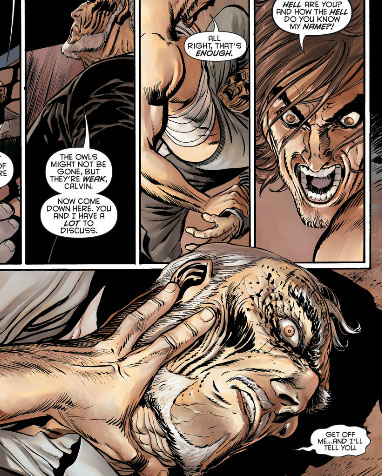 There’s just not as much expression as I prefer in my art. Or, maybe it would be more accurate to say there’s TOO much expression; the gaping jaws of the ragescream are not an especially common sight in the world, I don’t see any reason to see them multiple times in one issue. I do like how owlish Sebastian looks. It’s enough to make me wonder if maybe he’s not being completely honest with Calvin…

It’s hard to talk about this issue at this point in the game. It’s off to a solid start, but at only 2 issues into a completely new character, I can’t really get a good feel for it. I am liking what I’m seeing so far, and am definitely looking forward to seeing where Tynion is going to take it. What about you Drew, was this issue able to pique your interest, or was the exposition way too much to slog through?

Drew: Far from a slog, I thought this issue was about as perfect a statement of purpose as we could have hoped for this series. The zero issue effectively established the “who” of this title, and this installment effectively establishes the “what” and “why.” After the zero, I was under the impression that this title might be The Fugitive story with a zombie-ninja twist (which, for the record, would have been AWESOME), but it turns out Snyder and Tynion have a much more directed plan for the series — more like Kill Bill with a zombie-ninja twist.

A fixed list of villains feels much more limiting than the typical superhero comic, where rogues lists can be as numerous and varied as imaginations will allow, but that’s actually the thing that has me most excited about this title. While I love Batman’s emotional motivations, how it relates to individual villains is incredibly abstract. Talon inverts that formula, making Calvin’s relationship to his enemies much more concrete than his motives for pursuing them. It runs the risk of making every mission the same, but I think Snyder and Tynion have given themselves enough room to vary the “assets” the Talons are protecting, as well as the specific ways the Talons have adjusted to life away from the court. They might all dress the same, but I fully expect them to behave in wildly different ways, and look forward to the establishment of an arch-nemesis, who we can look forward to returning time and time again.

Even without strong personalities, these Talons are pretty badass. Did I mention that they’re zombie-ninjas? They’re fight scenes are like the best T-1000 sequences, only EVEN MORE BADASS. 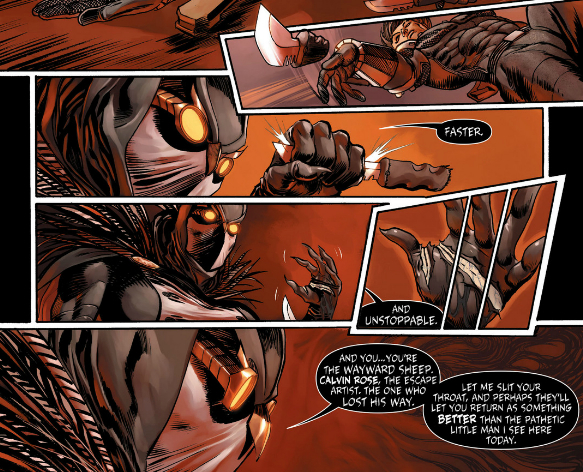 I understand abstractly that seeing a million scenes like that should get boring, but I think I’d need to see it to believe it. I would probably still buy this book if it was titled “Just Talon Fights.” I don’t think this shit will ever get old.

To their credit, Snyder and Tynion show a great deal of restraint with their deployment of ZOMBIE-NINJA FIGHTS, limiting the action to just one (albeit extended fight scene). The rest of the issue is focused on Sebastian’s story and Calvin’s own trivia regarding Gotham’s Metropolitan Terminal (which I think is the Owl HQ, Shelby). That last bit stuck out to me in particular, as the idea of a large, abandoned metropolitan train station reminded me quite a bit of Detroit’s own infamously abandoned train station. Sure enough, the buildings look remarkably similar:

Maybe that’s coincidence, maybe that’s a common train station design, but I like to think that the creative team is aiming to evoke the kind of urban decay Michigan Central has become such a symbol of. As someone familiar with that station, seeing it referenced is a very effective shorthand for what the Court of Owls means to Gotham, how deep and insidious their roots.

Much like Snyder’s other titles, Talon promises to be a blast, but doesn’t shy away from being incredibly intelligent, as well. It’s an exciting mix, and has been deftly handled thus far. At the end of the issue, Calvin winkingly asks “Where do we start?” Shelby’s right to suggest that it may not actually be until the next issue, but this one has me very confident that it’ll be worth the wait.