Drew: Confession time: I dropped this title after issue 4. My only sense of what is going on in this title is the zero issue, and reading the reviews on this site. For the most part, “The Others” storyline has been hard to follow from just summaries, as it focuses heavily on characters I know in name only. The only thing I’ve really gathered from those reviews is that 1) the art is fantastic, and 2) there’s room for disagreement about whether or not Aquaman is actually the villain of this title. Picking up the action in issue 13, I can say for sure that both of those statements are definitely true.

The issue picks up with the reiteration that Vostok has died, and that Arthur is going to kill Black Manta. It turns out finding Manta may be difficult, as he now has a teleportation orb, but eventually the team tracks him to the eye of a hurricane, where he’s attempting to exchange the scepter for the treasure he was after when Arthur killed his father. A fight ensues, and Arthur beats Manta, but decides not to kill him after all (though he oddly seems open to the idea in the future). Meanwhile, the Atlanteans Manta was trading with (who may or may not include Orn), make off with the Scepter. After the dust settles, Dominick exorcises his ghosts (literally) by visiting their families, while Mera assures Arthur she’s committed to their relationship.

Now, it may just be because I haven’t been around for any of the rising action of this story, but essentially all of the conclusions here feel too pat. I was especially distracted by Dominick’s epilogue, where he shares some catharsis with a grieving family I’ve never seen before.

Again, I haven’t been around to see how hard Geoff Johns has worked to earn this moment, but I’m kind of skeptical that ANY amount of groundwork could justify strangers sharing a hug while ghosts of dozens of soldiers look on approvingly. It reeks of cheap sentimentality.

Arthur’s conclusion feels equally unearned. At the start of the issue, he vows to kill Manta, but when he finally has his opportunity, he doesn’t — apparently as an act of mercy. This is clearly intended to demonstrate Arthur’s moral backbone, but then it’s weird that he suggests that he’ll probably kill Manta someday. 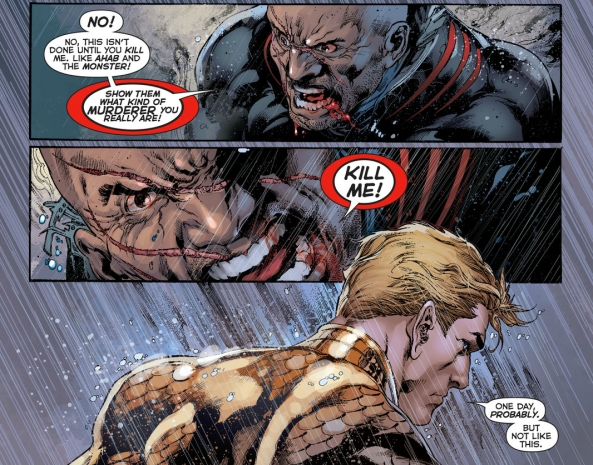 “Probably”? As in, “when you inevitably kill more of my friends?” Look, I get that killing in cold blood is bad, but isn’t allowing someone else to do it in the future just as bad? Especially if you plan on killing them at that time? He could have said, “I won’t kill you, Manta. And I hope I never do.” Instead, he’s betting on killing Manta at some point. Faced with the option of now and after he inevitably kills again, Arthur chooses “later.” This is presented as the heroic choice, but I just don’t buy it.

If the point of Arthur’s actions here are meant to show cooler heads prevailing, wouldn’t not threatening to kill Manta be even more heroic than chasing him down only to have an epiphany about how wrong killing is once he caught up with him? We’re left with a portrait of a wildly inconsistent man doing wildly inconsistent things for wildly inconsistent reasons. I think that makes him both the hero and the villain of this title, but I can see how “wildly inconsistent” might place him more in the comic book villain category.

More than anything, this issue reminded me why I dropped this title in the first place. I was never bothered by Arthur’s posturing, and I got out long before Mera’s wacky adventure to the grocery store, but I have been bothered by the way these stories tend to wrap up with pretty sunsets and a level of optimism that is totally un-relatable — and I don’t even have an estranged brother bent on killing me. These endings embody all the quaint lameness Johns was hoping to eliminate in “darkening” the title, but that darkness won’t stick without a little commitment. It looks like I showed up just in time to remind myself what bothered me so much about the first arc. Shelby, I know this title has been a bumpy ride for you, but did this conclusion fare better in your mind? Am I totally missing the character beats that earned these saccharine endings? More importantly, did you giggle when Mera finally told Arthur to put on a fucking shirt?

Shelby: With shoulders like that, why would she want him to? More importantly, why did Johns feel the need to conclude this incredibly long arc with trite sentiment and saccharine cliches? “I have to do this alone!” “I’m ashamed of my past!” “I won’t kill you because I’m a better man!” “I can’t find shirts that fit because of my swimmer’s build!” Just like the end of the Trench arc, Johns wraps everything up in a bow by having Arthur abruptly change his mind about how he feels and rendering everything we’ve read basically meaningless. How many times has Arthur insisted he has to do this by himself? How many times has he insisted he’s going to kill Black Manta this time, he really means it? How many times did he insist he couldn’t possibly bring himself to cause the demise of a whole race of creatures, no matter how horrifying and dangerous they might be? I had hoped Johns was turning Arthur into a strong and interesting character, but instead he’s just wishy-washy and whiny. Mera’s character is flat as well; instead of Sexy/Angry, like she generally has been, she’s The Supportive Wife. She is always the only one to make Arthur see reason, even when she is saying the exact same thing everyone else has said all along. When her Tormented Husband doesn’t know how to Make Things Right, she’s right there with Womanly Wisdom.

The Prisoner epilogue was absolutely the worst. It reeks of last minute inclusion to “wrap things up.” I wanted to know more about the Prisoner’s past: is he a meta human, is that why he’s got the ghosties? How did he get to where he was? I don’t give two shits about some sappy-ass conclusion that answers questions I didn’t have. Johns has done a huge disservice to one of the more interesting characters in this arc; I would have been more satisfied having never seen this spread.

I don’t know what to do about this title. On the one hand, I’m intrigued by Orm and Atlantis, and I feel like we’re going to need to read it for the Atlantis fight stuff coming down the pike in Justice League. On the other hand, I feel like this title is a bad relationship I keep going back to. Every time I think, “This time it’s going to be different!” but it never is.