Shelby: To me, the Phantom Stranger is a very old-fashioned kind of “hero.” There’s virtually no way to make the hard-boiled, fedora-wearing, mysterious man in the shadows seem like anything but old-fashioned. With his current origin as (probably) Judas Iscariot, he fits into that nebulous, religious category with The Spectre (of God’s Vengeance, for those of you keeping score). Unsurprisingly, he’s in here too; also not surprising, he’s an old-fashioned, hard-boiled detective. So, when Dan DiDio includes these characters with far more contemporary references, like kiddie soccer games and Star Wars quotes, it doesn’t fail so much as it just feels disingenuous.

The Phantom Stranger (Phillip to his friends and loving family) is at his kids’ championship soccer game when it is crashed by none other than Pandora. She and he have a sort of ethereal plane, outside-of-time conversation wherein she asks for his help in finding the one to open the box. She just wants to load all the evils she released back in, but Phil isn’t buying it; when he tells her he’ll try to stop her, she threatens to blow the whistle on the weird, civilian life he has crafted for himself. Once Phil and the fam get home, he has another outside-of-time convo, this time with Belial, the demon brother to Raven. Remember Raven? That girl he betrayed last issue? Anyway, Belial tells good ol’ Phil that if he ever tries those sorts of games with him, he and his brothers will rain hell down upon Phillip’s loved ones. Finally, Phillip gets a call from Terrence Thirteen, who needs a little help dealing with The Haunted Highway Man. He shows up right on cue, and strings up the Phantom Stranger, because why not? Meanwhile, Jim Corrigan is looking for the Phantom Stranger to settle a score from the zero issue, namely being shot and left for dead.

I honestly don’t know if there is a place for the Phantom Stranger in contemporary comic books. In concept and execution, he’s just such an antiquated character; seeing him interact with the real world in a normal-person way just doesn’t fit. DiDio has created this awkward amalgamation of Phantom Stranger, mysterious mystic, and Phillip Stark, regular old silver fox with a doting wife and hyperactive children. I think it’s supposed to be this new, shocking reveal about the character, but it just comes off as incorrect. I also have a hard time believing that ONLY NOW has his family be threatened by the various Powers That Be which Phil interacts with on a daily basis. Has he just been really, really good at hiding until now? Maybe everyone else was really distracted by the TV or something during the however many years it took him to assemble the Stark clan. Also, considering that this is only the third issue of this title, it’s not great that I had to look up what exactly had happened to Jim Corrigan in the zero issue. I remembered he was the Spectre somehow, but I had totally forgotten that he was supposed to have died. This isn’t Team 7, we’re not dealing with a cast of hundreds here: it’s just one man. I should be able to remember what he’s done in the last three issues. 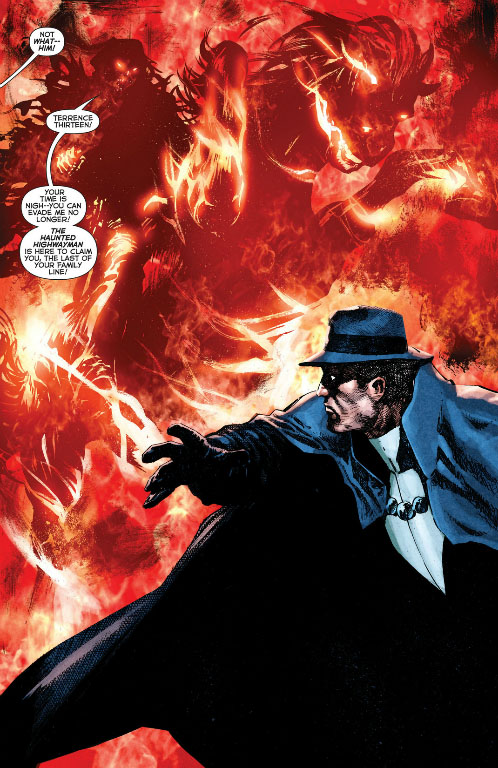 I’m sure a lot of credit should go to Ulises Arreola and Philip Tan, for their colors and “embellishments” in creating that magic atmosphere that makes those particular scenes work. When Phillip (Stark) transforms from the Phantom to his regular old self, the blue misty nature of it is actually quite pretty, but that effect is totally spoiled once he turns his dead eyes upon the mutant doll faces of his children.

I think my biggest problem with this title is I don’t know DiDio’s intentions. Is this book supposed to be a throwback to an era gone by? A nostalgia thing, an homage to the noir detectives of the past? Or is this supposed to modernize the Phantom Stranger, bring him into 2012 without losing that hard-boiled edge that’s so integral to his character? Maybe DiDio doesn’t even have such overarching intentions in mind: maybe that’s why this book seems so aimless, like it’s meant to wander comic book stores for all eternity, with no one ever knowing it’s true purpose…

Taylor: Tell you what Shelby, while I am a man who enjoys his noir just as much as the next, I am in no way a fan of what is going on in this issue. What is perhaps an attempt to hearken back to simpler times and moments in this issue comes off as nothing but cheesy and cheap Hallmark snapshots. I’m guessing DiDio is trying to create a sympathetic character in the Stranger by having him experience these “tender moments” with his family. However,  rather than making me empathize with the Stranger, these instances of familial love do nothing but further alienate me from the man and this title. I find I’m just grossed out by the overly picturesque portrayal of the perfect nuclear family because it feels so disingenuous and forced. If anyone’s family behaved in the way the Stranger’s does then I would like to hear of it because this portrayal frankly is too unbelievable to be taken seriously. I think the Stranger’s family would be more sympathetic if they were flawed and therefore real; give us a marriage that is strained, a daughter that struggles with her self image, or even a son who isn’t competing for a soccer championship. I think Anderson’s art doesn’t help this stale portrayal either. As you pointed out Shelby, it just doesn’t work for scenes of everyday life. It looks like the art you would find in a home-ec textbook from 1978.

What further alienates me from the Stranger and what makes me think that he deserves every ounce of the suffering he’s supposedly undergoing is that he is kind of dick to pretty much everyone he meets. I get that the Stranger is worried about cosmic events that deal with Hell on Earth and his own penance but maybe he should lighten up for half an hour and enjoy his kids’ soccer game rather than zoning out and making his wife sit on the bleachers long after everyone else has left. Then when Thirteen calls him up, the Stranger, in his self-absorbed fashion, whines about how hard his day has been because he has had to talk to two different people who weren’t members of his family.

Yes, how dare Thirteen call up a friend or colleague for help, how very selfish of him. I can get behind a flawed hero or anti-hero but the Stranger is really giving me nothing to work with in these first three issues of the series. His inability to consider anyone other than himself gives me no reason to care about what happens to him and when the Haunted Highway Man decides to lynch the Stranger instead of Thirteen (why?) I can’t help but feel he kind of deserves it.

And speaking of thirteen, who the hell is this guy? While I’m sure more knowledgeable readers than I can place who he is and his relation to the Stranger, we get absolutely no indication what these are in this issue or those that proceeded it. I’m fine with authors assuming that their readers possess a certain amount of knowledge regarding the universe they are writing about, but it seems nothing short of lazy to not have some sort of introduction. And speaking of lazy, what is going on with Thirteen’s sweater in this scene? Is that an artistic choice (and a questionable one at that) or is it just a lazy rendering? Ultimately I think this is what will make or break this title for me. If both the story and the art are cleaned up and given more thought than perhaps it can go somewhere, but if not, this will be a tough title to read even just once a month.