Jack: When we left off, Batwoman and Wonder Woman had just sought the assistance of Pegasus, who, confusingly, was not a winged horse, but an exceptionally grizzled, disheveled, and unhappy-looking man of purpleish complexion. In this issue, we start to get a grasp on why.  Pegasus is “dying” (or experiencing some not-yet-fully-explained immortal analog for death), and it is not a pleasant picture. Batwoman examines his wounds and mentally outlines a brutal altercation with Falchion, for which Pegasus is distinctly the worse.  He explains Falchion’s complicity in Medusa’s sadistic, misanthropic, world-domination plans. He says that if Wonder Woman will cut off his head so that he can die “a warrior’s death,” he will point them in Medusa’s direction. Batwoman is appalled, but Wonder Woman agrees. Unsurprisingly, he sends them back to Gotham. Wonder Woman kills him, then quietly agonizes over the decision.

We return to Gotham, where Maggie and Harvey are facing down Medusa with alarm and considerable confusion. Medusa describes Falchion’s sacrfices for her own unholy ascent, while Maro is busy combining classical myths and urban myths to turn monsters into other monsters, namely a hydra that dwarfs skyscrapers. Medusa begins to summon the kidnapped children for some undoubtedly evil purpose. Harvey tries to intervene. Maggie throws herself on top of him to keep him from looking at her and being turned to stone (I assume).  Just when all seems lost, Batwoman and Wonderwoman arrive on the scene with a heart-warmingly understated, “Babe, I’m home.”

Probably the first thing to note about this issue is that it’s really very gross. This series has always done an exceptional job of humanizing violence, but J. H. Williams outdoes himself in this issue. Pegasus has been through an ordeal that is quite disturbing to reflect on.  It is hard for me – because, you see, I’m a human – to empathize with the image of having your wings ripped out of the sockets, but I’m honestly probably going to have a nightmare about it in a few hours. He is a flayed, battered, torn-up, oozing mess, and if you don’t get a visceral reaction to these images, you should probably give up on comic books altogether and move straight on to documentaries about third-world refugee camps.

The epistemology remains ambiguous (again, I think that’s a good thing – it bucks any conceivable hierarchy to the Chain of Being), but it does seem like in the interest of plot devices, we are discovering certain mechanisms that govern this universe. Pegasus can be killed by Wonder Woman, but Batwoman could not do it. Only gods can kill gods, apparently? Noted. Pegasus may regenerate if people believe in him, which is a tall order, because pop culture has displaced religion. Got it. Touchingly, Batwoman promises to start to believe in him, which if you think of it at all, is a gesture on par with “clap if you believe in fairies,” but the cliché is devoured by the innocence and earnestness of the moment. Wonder Woman wrings her hands over the mercy-killing and laments that she may never have Batwoman’s courage. Is this a moment of weakness? Does she admire Batwoman the way that adults admire children – or perhaps the way that adults admire golden retrievers? Or are we merely witnessing the contrast and the camaraderie of two characters with the same deeply challenging career paths?

Like Batwoman, I was not stunned to learn that Gotham is, in fact, the “dark heart of the world.” (Check out that visual, by that way! Love it.)  Wouldn’t it have to be?  Like Metropolis, Gotham City is a fiction that exists strictly to demonstrate the full dark, disturbing portrait of interpersonal drama and tragedy. But I’d like to add a real-world note to that. The human population is growing at, as far as anyone knows, its fastest rate ever, and it is urbanizing faster than it is growing; which is to say, within our lifetimes, slum will become the most accurate description for where most of the people on the planet live. This note about cities being “where shadows are deepest and evil is born” may, intentionally or not, be an accurate and insightful reflection of the real quality of human life, in the aggregate. 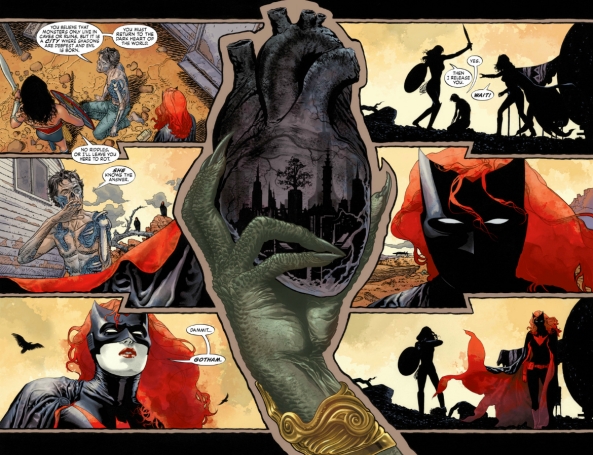 Finally, an enticing but disconcerting promise of things to come:  “Who is Maggie Sawyer?” Do I want to know? Maggie’s characterization has been at once admirable and believable, but ultimately sort of indistinct. I know that she is a tirelessly committed public servant with a good sense of humor and a big heart, she has put up with Kate’s bullshit until recently, and the two of them are adorable together. Of all the characters in the series, she probably comes the closest to marrying Jake Kane’s archetype of Stoic, Heroic Soldier-Martyr to a gentler, humbler, more authentic reality. Perhaps that is why she has not needed an identity crisis, unlike everyone else in Gotham. Am I prepared to learn what her failings really are? Is Kate? Will they be better or worse for the revelation?

This issue left me impatient. It taught me that the previous issue was just another digression, another charming rabbit-hole. I want to get to the bottom of this thing, solve mysteries, rescue kidnapped children, reunite estranged family members and girlfriends, resolve impossible archetypes to human imperfections, and figure out what on earth Greek gods and multi-headed hydras are doing in my reality. Is that too much to ask?

Care to weigh in, Patrick? Are you ready to go back to Gotham? Are you starting to itch for resolution in this story arc? Where do you see classical mythology figuring in to the rest of this urban legend story?

Patrick: Oh, I think one of the more interesting points being presented in Batwoman #12-14 is that there’s not some hard-n-fast difference between classical mythology and urban legend. The climax of issue 14 finally literally shows one creature of urban legend becoming a creature from mythology in the form of Killer Croc transforming into the Hydra. It’s actually been a remarkably efficient ride: introducing Wonder Woman and her world; exploring the differences between those worlds via Kate’s insecurities fighting alongside Wonder Woman; and Wonder Woman realizing that her world’s ways are outdated and that Batwoman is the wave of the future. For all the cool monsters and impressive gore, this issues’ real strength is Williams and Blackman’s stunningly insightful character moments — it only comes off as sort of odd because those insights are focused on Wonder Woman and Pegasus.

And while it seems like a bummer to characterize non-Batwoman characters so heavily during an issue of Batwoman, this doubles as an important reminder about the nature of myth and legend: they don’t just generate monsters — they generate heroes as well. Heroes like Wonder Woman, capable of sensing the innate value of her partner’s compassion. Or heroes like Pegasus, capable of withstanding brutal torture (knowing full well that he’d feel shitty forever) in order to keep some children safe. I feel like we just barely start to see this power-of-belief thing applied to Batwoman herself, when the GCPD looks to the sky and sees their own hero falling from the sky to rescue them. Batman has long been a symbol of strength in Gotham, now it’s Kate’s turn.

I am by no means impatient to close off this story arc, but I am happy to be back in Gotham. Williams does a mindbogglingly excellent job of melding those kind of blockbuster monster movie ideas with distinctly urban concepts. Early in the issue, we see Kate apply her modern day crime scene investigation skills to the wounds of the immortal Pegasus (using those fun little detective circles we’ve seen elsewhere in this series). And I can’t tell you how much I love this page where the Hydra is revealed. 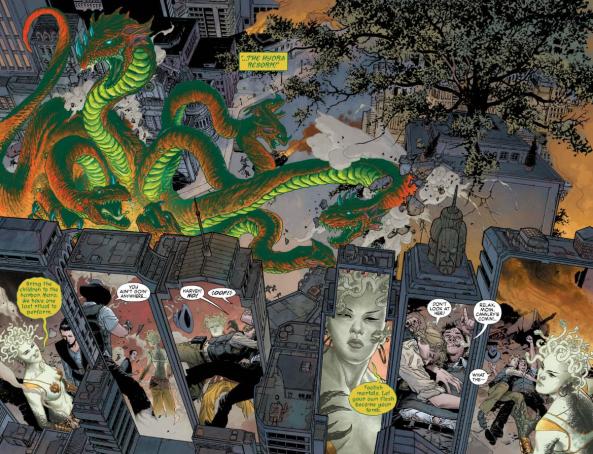 Panels on the sides of buildings! The only other place I’ve seen this sort of thing was in Batman Incorporated 1, and it was breathtaking there too. There’s barely a spread in this issue that doesn’t take my breath away. Williams is such a master of visual drama — it’s easy to forget between issues just how good he is. Jack, you might not know this, but he’s been conscripted to draw the next installment in Neil Gaiman’s Sandman series, which is good for Sandman, but sad for Batwoman fans. I know we’ve seen other fantastic artists step in to fill Williams’ shoes, but his art is basically perfect, and anything shy of that inevitably disappoints. So I’m kind of savoring the end of this arc — every last drawing is a gift to Batwoman fans.

Though, I will admit that it’s sort of a bummer not to see the rest of Batwoman‘s regular cast in this issue. There’s that faint glint of Maggie, and she’s particularly bad-ass in her brief appearance, but no Bette, Jacob, Bones or Chase. Maybe they’ll all pop out of the woodwork in the final moments to remind that urban legends make heroes too.