Mikyzptlk: My complaint with the first 12 issues of Justice League was that there was too much emphasis placed on the action and not enough on the characters. Being a fan of Geoff Johns for many years, I’ve seen what he can do with characters big and small and have read many tales of his that were rich with deep characterization. As year 2 of Justice League is starting to rev up, I’m happy to see Johns starting to focus more on his characterization. Even though this issue isn’t perfect, I’m glad to say that it’s less a Jerry Bruckheimer summer blockbuster and more of a return to what I come to expect from Johns.

The issue opens with a Cheetah-infected Superman attacking the Justice League. The League subdues Superman with the help of the tribe that once considered “The Cheetah” an ally. During the fight, the villainous Cheetah escapes so half the League stays behind with the tribe to attempt to heal Superman while the other attempts to capture Cheetah. Fortunately for both groups, the tribe knows how to cure Superman and Aquaman has a plan to capture Cheetah along with the help of Wonder Woman. While all of this is going on, the tribe explains that “The Cheetah” is actually a goddess of the hunt that through a convoluted series of events ended up in a knife that Barbara Minerva then stole to become an evil version of The Cheetah. Anyway, Superman is cured and Cheetah ends up in Belle Reve which apparently (and unfortunately for our heroes) is right where she wants to be. It turns out that she’s working with Black Manta and has been positioned in Belle Reve for some sinister purpose. Back in Justice League HQ the team discovers that Barbara Minerva is simply one of her many aliases and that all of her other identities have multiple criminal offenses. Wonder Woman’s assertions that “The Cheetah” corrupted Minerva are proven wrong causing Diana to have a major sad. Superman takes her out to Smallville for a date in a diner and tells her not to be too let down by the fact that some people are jerks and that she should remember that they all fight to protect the good in humanity. As Superman and Wonder Woman make out some more it is revealed that Batman has placed a tracker on the Man of Steel and is being a SUPER creeper.

There is a lot that I liked about this issue. I feel that Johns is paying more attention to his characters and that we are starting to see a team of heroes that actually want to work together. I like seeing Batman and Aquaman work more effectively as a team as well. I can see them being a very interesting and effective duo in the issues to come. Lastly, I’m VERY interested to see what kind of trouble Batman’s paranoia is going to him into this time. In the Pre-52, his paranoia partly led the dissolution of the Justice League and a world wide crisis. With “Trinity War” approaching, I wonder if Batman’s paranoia will lead to League infighting once again.

Now on the some of the stuff I didn’t like as much. Take a look at the panel below.

Here, Cyborg is shown translating between the tribe and the other Leaguers. This is a pretty cool and DEFINITELY useful trick considering how many different kinds of beings the JL comes across. Even though I love that Johns is elevating Cyborg in this way, I still can’t stop thinking of him as the Justice Leagues personal T.A.R.D.I.S. My point is that I want to see more of this character beyond just the cool things that he can do. As the youngest Leaguer of the bunch (currently) I think that he can provide an interesting perspective to the older Leaguers and provide a unique window that readers can view the book through. In a recent interview on CBR, Johns says that we’ll be seeing Cyborg’s “biggest role to date” in the upcoming “Throne of Atlantis” storyline. I’m hoping this means we’ll get a deeper characterization of the character that goes beyond what we’ve seen so far.

Another thing that bothered me about this issue could be due to the fact that I used to eat paint chips when I was kid. Take a look at the following few panels that gives us the explanation of what transformed Barbara Minerva into The Cheetah.

Is it just me or is this needlessly complicated? I feel like I need a flowchart to understand this thing.  Seriously, I had to read this over a bunch of times before I understood what was going on. I don’t really understand why the curse had to have some kind of complicated journey to get to Minerva. Why not just simplify it and get on with the story? I imagine this convoluted set up is here because the League will use this information to stop Cheetah somehow but I would have appreciated a more streamlined explanation that didn’t require me needing to read it a couple (hundred) times.

Tony Daniel’s artwork was inconsistent at best in this issue. I’m really not sure what happened here. He’s improved greatly over the years but this image of The Crow…I mean Superman should tell you all you need to know about what I didn’t like about his artistic outing in this issue. 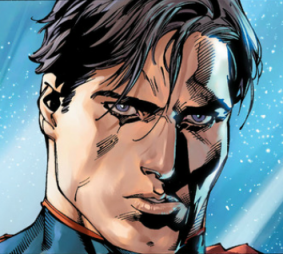 I’m really not sure what is going on with some of his artwork here. While some of his work is laughable like the Super Crow up there, other shots, like the first image of Batman I posted, are quite nice.

Shelby, this issues had some highs and lows and I’m curious to know what you think of it. I didn’t even get a chance to write about the Shazam backup so I’ll let you tackle it and catch up with you in the comments section!

Shelby: When does Super Crow come out? That is a title I would read. I can see where Johns is finally beginning to pull the team together and focus on character development,  but it doesn’t feel especially genuine to me. Clark’s “there are good people out there” speech is fine, I guess, but it’s not especially interesting. That was my problem with this issue; for all the action we had, I found it a little dull. You’re dead on the money about the Cheetah legend being needlessly complicated, both in story and visually. It’s almost impossible for the eye to follow the text boxes and flashback when combined with the dialogue and action of the fight between Diana and Cheetah. Mushing the two together completely eliminates the drama from both stories and produces a spread that my eyes just sort of glide over without taking any of it in. There are also some details that are just sort of glossed over; details like the Flash being seriously injured, or Clark being magically healed and never speaking of the ordeal again. That last one really bugged me; Clark is going on about how people are inherently good and ultimately demonstrating that he is an ideal representation of Good In The Universe, but when he’s possessed by a demonic force and turns on his friends, he doesn’t have anything to say about it? There’s a lot of interesting character development right there that is completely ignored so Diana can talk about her trust issues.

Again, the Shazam! backup proves to be a better reason to read this title than the actual Justice League story. Black Adam is trying to get used to the way the world works now. He decides he doesn’t like it, and enlists the help of Sloth, one of the seven deadly sins, to help him tear the world down and start over. Meanwhile, Billy and Freddy are still running around enjoying the fact that Billy is now “pretty jacked.” I’m really liking Black Adam as a villain; he’s got a “free the enslaved” vibe that I can get behind. When he sees some people protesting pension cuts, the solution seems simple.

Yeah, he just dropped a man to his death, and then told the protesters they were free. He’s certainly a villain, but his free-the-slaves motives make him slightly more complex than “I’m a bad guy, so I do bad things.” You know me, I’m a sucker for complex villains. I assume he’s going to go about, collecting the rest of the seven deadlies, and that’s an exciting prospect. There’s just enough Christian mysticism involved to make me super interested. I’m also glad we didn’t focus any more on Billy and Freddy than we needed to. I get it, he’s a kid in an adult body, they’re going to run around doing adult things. That’s all I need to know. I suppose it’s pretty weird that I mostly like this title for it’s backup story, and in the backup I prefer not reading about the title character. I’m not sure if that means Johns is doing something good and interesting, or just terrible; only time will tell, I suppose.