Shelby: Of all the emotions in the spectrum, fear is the one least like the rest. The members of all the other Corps earn their rings by feeling; Saint Walker’s unending well of hope earned him the blue ring, Carol Ferris’ persistent love of Hal earned her the violet ring, etc. Even the members of the Indigo tribe, though they originally had their rings forced upon them, have demonstrated that they are who they are because of the compassion they feel for others. The Yellow Corps, however, isn’t made up of extremely frightened people, it is made up of people who cause great fear. It’s a distinction I’ve never really pondered, because it makes sense; who would want to read a story about people who’s only power is being a scaredycat? Tony Bedard has apparently never really pondered it either; unlike every other yellow lantern I’ve ever known, the only way for Kyle to master the power of the Yellow is by being afraid.

After learning rage last issue, Kyle is a quick study at learning compassion. Indigo-1 gives him some sage advice about feeling both positive and negative emotions, and to never trust love, and then sends him on his way to find Arkillo. Kyle and Arkillo fight for a while, until finally Kyle admits he’s afraid pretty much all the time, and then he can channel the yellow light. Meanwhile, Carol checks in with the Zamarons, and while they don’t approve of what she’s doing with Kyle, since it’s for love they’ll allow it. She finds the boys just as the lesson is finishing up, and she and Kyle head out to find Larfleeze. Arkillo decides to join them at the last minute; he figures if they find Hal, they’ll also find Sinestro, and then he can kill him and become the greatest yellow lantern in the galaxy.

As you may have gathered from the intro, I have a big problem with the way the power of fear is handled here. Really, this lesson has the potential to be the most interesting; what Kyle SHOULD be learning is how to be another Sinestro. How can he turn his willpower into the power to inspire fear in those around him? Instead, Kyle ends up doing the one thing every Green Lantern cadet learns to avoid on day one of training: he gives in to his fear.

No, no, no, Green Lanterns overcome their fear, Kyle even said so himself earlier in the issue. Already, his admitting he’s scared goes against what we know about the Green Lanterns. But, in her pep talk earlier, Indigo-1 did tell him that sometimes fear is the right response, and he is working to become a Lantern the likes of which no one has ever seen before. That may be reason enough to break some rules, I’ll give Bedard that, but it doesn’t change the fact that that is not how Yellow Lanterns work. Sinestro did not form an army of aliens who were total chickenshits, afraid of their own shadows. The Yellow Lantern Corps was composed of the most feared entities in the universe. I get that it flies in the face of the way every other Corps works, but that is still the way it is; this just feel incorrect.

I’ve been really frustrated by this title lately. It started with Issue 12, which seemed rushed and anti-climactic. I had to go back and re-read the last couple issues, because I could have sworn I had missed an issue somewhere. The plot is jumping around as much as Kyle and Carol are. Perfect example here: at the end of the last issue, Kyle and Carol were off to find Arkillo and Larfleeze. This issue opens with Kyle and Indigo-1, and Carol nowhere to be found. Where did that come from? Did Kyle just run into Indigo-1 on his way to Arkillo and decide he might as well get a quick lesson in compassion? This arc could be a really thoughtful look into how the emotional spectrum works, and has the potential  to totally reinvent the various Corps. Instead, we get shallow and rushed stories of how to make Kyle mad, or scared, or whatever. Again, it seems that Bedard is being pushed to fit this arc into his designated number of Third Army issues, and in my opinion the title is suffering for it. What do you think, Drew? Am I being too pedantic, focusing too much on continuity and the past? Or are there some legitimate issues with the story-telling in this issue?

Drew: Well, Shelby, you raise a number of valid criticisms, but I couldn’t disagree more on your assessment of the Yellow Lanterns. Sure, we think of the Yellow Lanterns as being without fear because they’re so dang scary, but — as you pointed out — overcoming fear is the domain of Green Lanterns. The notion that Yellow Lanterns are secretly motivated by fear — the bully lanterns of the universe — isn’t intuitive, but I’ll argue that it makes a lot of sense. They must know fear in order to instill it in others. It’s like when Bruce embraces his one fear in Batman Begins in order to strike fear into the hearts of criminals. Sinestro was afraid of a chaotic Korugar, and Arkillo is afraid of Sinestro. I don’t think either of those reveals change the characters fundamentally, but it makes their motivations more explicit, and solves that “Yellow Lanterns are different” issue in a logical way.

I’m much more interested in Kyle’s meet-up with Indigo-1. Specifically, what makes his quest any different from just becoming an Indigo Lantern? Moreover, if he already mastered Hope and Rage without the help of Compassion, does he even need that aspect of the emotional spectrum? Essentially all that ability does is grant access to the rest of the emotional spectrum, which Kyle is already well on his way to doing. Maybe he’ll need the help to access some of the less intuitive emotions, but it seems kind of bogus that he calls up  Compassion in order to summon constructs of the emotions he’s already mastered, though I guess it’s nice Indigo is in there now. 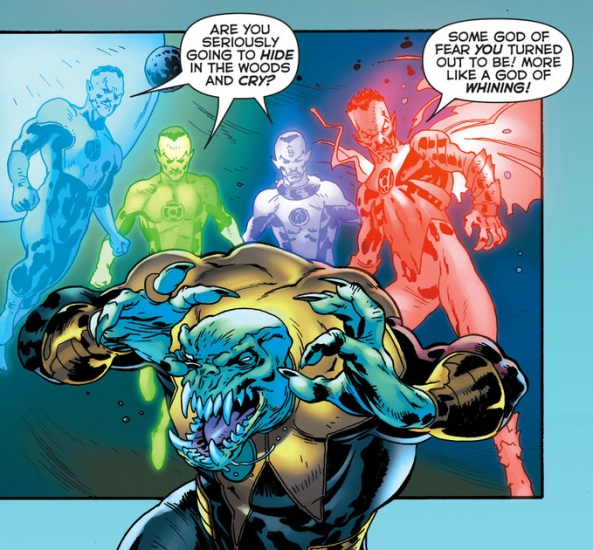 What’s weird about that meeting is that Kyle is a dick for no good reason. Like, he’s ostensibly here for Arkillo’s help, and the two have enough history together that Kyle could just walk right up to him and ask. Instead, Kyle confronts him with a series of construct-Sinestros, which berate him for no fucking reason. Kyle claims it was to help Arkillo overcome his worst fear — which, as I’ve mentioned is misguided, since Yellow Lanterns gain their power from embracing their fears — but he ends up being the asshole who jumps out at you just for the hell of it. Do me a favor, Kyle: never do me any favors.

That image reminds me of just how wonky the art gets in the back half of the issue. Both Andrei Bressan and Amilcar Pinna receive art credits, which makes it difficult to tell who was on which pages. The first half of the issue is rendered in a very clean style, with much of the expressivity coming from Nei Ruffino’s colors, while the back half of the issue sees a great deal of expressive flexibility with the character models, which unfortunately results in some awkward art, from a particularly pronounced brow on Carol, to Kyle’s apparently concave face.

You don’t have to be a master anatomist to know that noses stick out further than a line drawn from a person’s chin to their forehead. I’ve never really known where Kyle’s nose was supposed to fit under that chunky mask he insists on wearing (sorry Kyle, faces have more contour than that), but this is absurd. I could understand bending the rules a bit if it would make the mask look cool, but since this doesn’t, I’m not sure why we shouldn’t expect a face to at least fit under that hideous mask.

I guess we agree that there’s plenty to gripe about in this issue, Shelby, but it’s interesting where we disagree. I look forward to debating the nature of the Yellow Lanterns in the comments.