Scott: ‘Tis the season for excess. We eat too much, spend too much, we eat too much again and, when things start feeling a little hectic, we tend to think too much. So, as I sit here debating whether to have more stuffing or more mashed potatoes, I can’t help but wonder if Wonder Woman is biting off more than it can chew. Of course, that’s silly; this comic has proven time and time again that it is one of the most clever and well thought-out series around. So the fact that this issue followed four separate storylines in four distant locations shouldn’t worry me, right? But if Wonder Woman is going to turn into the great meal I know it can be, at some point all of these different ingredients are going to have to come together on one plate, so to speak (I don’t know if I’m trying too hard to make this into a Thanksgiving analogy, or not hard enough).

Wonder Woman 14 finds Wonder Woman trying to convince her half-sister, Siracca, to join her in tracking down Hermes. Siracca recounts her life story — when she was just a child, she was killed by Hera in a fit of jealousy upon discovering that Zeus had been unfaithful — before deciding to help Wonder Woman. Meanwhile, on Mount Olympus, the children of Zeus continue to debate the threat of Wonder Woman. Ares has had about enough and leaves the gathering, and Apollo sends Dionysus to follow him. In Antarctica, the First Born of Zeus is being caught up to date by scientists. He spent the last seven thousand years digging his way out from the center of the Earth, and all evidence of his existence has since been destroyed. Lastly, Highfather tells Orion that the Source, the sum of all Universal Knowledge, has detected a threat on Earth capable of bringing on the end of time.

It’s impressive how this series just continues to expand. There are already about a dozen well fleshed-out characters for us to follow, and this issue establishes the backstories of two more relatively new characters, Siracca and the First Born of Zeus. Writer Brian Azzarello has a great talent for quickly developing very sympathetic characters. And he develops these characters in a way that advances the larger story as well — Siracca and the First Born’s stories not only inform their own motivations, but also reveal new, important information about Zeus and Hera’s pasts.

I love that Siracca, despite being a frighteningly powerful, knife-throwing demi-god, is really a sweet little girl at heart. You can tell by the way she takes to Wonder Woman that she is actually a scared kid who needs someone she can trust, and that’s what she’s found in her half-sister. She’s an especially intriguing character, since her powers carry with them certain moral concerns, a la the cell phone sonar spying device from The Dark Knight.

Tony Akins and the art team have some great moments in this issue as well. I found the two flashback sequences to be the real standouts, artistically. I’ve frequently been impressed with the use of color in Wonder Woman. While most comics stick with bold, crisp, solid colors, Wonder Woman isn’t afraid to go with a grainier, hazier, almost pastel look at some points. Siracca’s flashback provides a great example- check out the first page of that sequence: 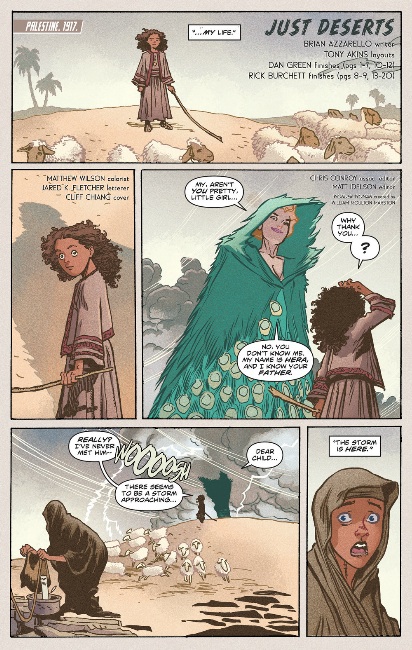 The monochrome of the desert splashed with Hera’s peacock green creates a striking contrast that is simply beautiful to look at.

Later, as the First Born’s past is explained, the work of Azzarello, Akins and colorist Matthew Wilson come together brilliantly:

The image of the wolf approaching the infant is rendered appropriately terrifying, with its glowing eyes and bared fangs accenting its silhouetted figure, and the baby’s arm in the foreground establishing the imminence of danger. The next panel is even more powerful. Rather than attack, the beast accepts the newborn with a caring lick, while the color scheme shifts from the red sky of dusk to the deep blue of a moonlit midnight. A new day has begun and the child has taken control of his surrounding. Perhaps Zeus had reason to be afraid after all.

Taylor, I’m not sure what to make of Orion’s appearance in the final scene. The setting is not established and it seems they could be just about anywhere in the universe, and Orion’s sleek suit implies an awesome space-traveling super-hunter worthy of his own comic. I have no idea what will come out of this, but throwing in this scene at the end of the issue really made me want to get my hands on Wonder Woman 15 immediately.

I enjoy this Wonder Woman series so much that it’s hard to find much to critique, and this issue is no exception. The scope of the Wonder Woman universe is dazzling, but the series is even more impressive on a micro level. The characters are so engaging and well crafted that, even as we start needing to use our toes to count all of the important players we are supposed to keep track of, I still crave more new faces and stories. While we all struggle to exhibit a little bit of self-control this time of year, Wonder Woman dares to loosen its belt a couple notches and cram a little bit more in. And I’m thankful for that.

So, Taylor, what did you make of this issue? How great of an ally will Siracca prove to be? Is the First Born the big threat everyone should be worried about or does Azzarello have even more tricks up his sleeve?

Taylor: Scott, I’m almost certain Azzarello has more tricks up his sleeve; time and time again he has not let us down, so I have no reason to believe this will be otherwise. Issue 14 is interesting because the plot doesn’t move forward in any significant way (all the characters stay in the exact same place throughout the issue) yet we are given a lot of information that will surely come into play in the later issues of the title. I was pleased to see this move by Azzarello because it is a the sign of a mature and confident writer who knows exactly what he is doing and exactly where he is taking his story. Too often we are witness to comics that feel aimless or repetitive in their structure and fail to understand that each issue of a title is but a part of a greater whole. In this issue we see that Azzarello feels more than comfortable with the developing his story even if it means this particular issue isn’t chocked full of action and adventure.

Yet, there is so much in this issue to really appreciate. Scott, you mentioned Azzarello has an uncanny ability to create characters we care about and I have to say I agree with you 100 percent, especially in this issue. Even though I barely know Siracca as a character I am willing to believe that ultimately she will help Wonder Woman in her quest — if for no other reason than her hatred for Hera outweighs any other feelings she may have. But to think that Siracca is a character who is defined by her need for revenge would be a mistake. Like all well-written characters, Siracca is like an actual human being who has many needs and desires, one of which is the want to be accepted by our peers. I simply loved the scene where Siracca and and Diana are battling and listing the wrongs that Hera has committed against  them. This isn’t your typical model for building a relationship but when you consider the lives of the two people involved in this exchange it seems incredibly fitting.

This scene is also a perfect example of well-wrought comic book art, thanks to the efforts of Akins. Just take a moment and look at the expressions on the faces of Siracca and Dianna in that panel above. The emotion on display in their faces truly brings to mind the saying that a picture is worth a thousand words since I’m not sure how you could explain what they are feeling using words in a comic book (it would simply take up too much space). As you mentioned Scott, Siracca is a doomed to be a perceptually young girl, even though she has lived in a virtual hell for years. Her isolation from the rest of humanity has to be taxing in a thousand ways so one can’t help but understand that she would accepting of Wonder Woman’s affection. All of this is expressed in that face above, a face which acknowledges the hardships that have come before and is willing to accept the toll and the vulnerability that brings.

This isn’t the only instance of wonderful art in this issue, in fact, the entirety of it is filled to the brim with great art. In a world that is becoming ever more complex and interconnected I think we sometimes lose sight of the fact that there is beauty in simplicity and it’s refreshing to witness an appreciation for this in comic book art. Akins style is subtle and while some might find it to be overly simplified, it’s obvious that — as with Azzarello — we are witnessing the work of a patient and thoughtful artist.

I mention all of this because you were talking about meals and Thanksgiving in your introduction, Scott. For my Thanksgiving my friends and I made several dishes that while delicious, were also simple. The summation of all the ingredients that later became individual dishes that then become but aspects in a large meal is really pretty amazing when you consider it. Similarly, Wonder Woman employs several simple, yet effective, elements in its story telling and and artwork that overall create a title that is a feast for the the eyes and the mind (sorry, I love puns).