Shelby: Who doesn’t love political intrigue? I’m not talking about the presidential campaign nonsense we recently had to put up with, I mean the old school machinations that only a royal family could conceive of. When power is passed through bloodlines (literal magical powers divied up among the relatives), manipulating those bloodlines and relations suddenly becomes crucial to keeping a position of authority. Things are about to get complicated, so I’m going to try to map this out as best I can.

The issue opens with Amy trying to be cool and not puke in front of her new friend Ingvie, Princess of House Citrine, while Graciel conducts some business with House Onyx. At a fancy dinner that night with houses Citrine, Amethyst, and Turquoise, Amy learns a little bit more about the world she’s landed in. Apparently, back in the day, Graciel was betrothed to Reishan, the asshole dad of House Diamond. She instead fell in love with Vyrian of House Turquoise, so they ran off and got married. For those of you keeping track, that makes the current Lord Firojha of Turquoise Amy’s grandpa. After Graciel and Vyrian fled, Mordiel married Reishan in her place, but the marriage was annulled when Mordial realized she couldn’t have babies. So now, Graciel is back, and is the rightful heir to the Amethyst throne, and has brought an heir of her own. Here, I made a chart to help keep it straight; it’s color-coded!

ANYWAY Graciel decides to share the power of House Amethyst with Amy, which means the total power of the house will be split evenly between Amy, Graciel, and Mordiel. During the ceremony, Amy can tap into her aunt’s thoughts and emotions, and Mordiel very nearly convinces Amy to kill her own mother. Luckily, Graciel’s advice before the ceremony (remember that I love you) prevails, and everyone comes out of it unharmed. Well, except Mordiel, who now has a third of the house’s power instead of half, so she summons Onyx assassins to kill Graciel, but orders they leave Amy unharmed.

This issue is packed to the GILLS. Somehow, with the action and political baggage, Christy Marx still finds time to give us some character development. I’m most interested in Hadran, the middle son of the lord of House Diamond. In a mere two pages, Marx very effectively establishes him as less terrible than the rest of his family when he busts his older brother’s very own prima nocta party. Interesting fact: this is another character development point which involves an attempted rape. Again, much like in the zero issue, I only saw this as a plot point: an easy way to show Hadran as a decent person compared to his brother, as well as forge a connection between him and Amy, who appear to be approximately the same age. As I see it, Marx is planning to further complicate the thorny relationship between houses Diamond and Amethyst with a friendship/potential romance between the two heirs. Will the Internet see this as another black mark on this “kid-friendly” title? Does it make it better or worse that this time the attempted rape is set in pseudo-medieval times, and the rescuer is a man? Only time will tell.

Marx and artist Aaron Lopresti continue to sparkle (har har) with this story. It’s not Marx’s complicated politics or Lopresti’s sweeping city-scapes that really sell it; they have such a great way with small, character moments as well. My favorite is shortly after Amy and Graciel’s arrival at the seat of House Citrine. The Lady of the House is rather fond of pomp and circumstance, and invites Amy to make a recording to mark the historical significance of the moment.

That’s perfect. Amy, like any 17-year-old put on the spot, can only be awkward, prompting mild annoyance from the Lady. It’s so natural and light, a perfect way to help ground this fantasy world in a believable reality. Marx has actually been really smart by giving Amy the same amount of information as we the readers have. It makes expository dialogue far less cumbersome, and again, helps ground this world in reality.

Tony Bedard’s Beowulf continues to delight as well. Beowulf wounds the Grendel before it can kill Wiglaf, but the beast escapes because it is horrifying. 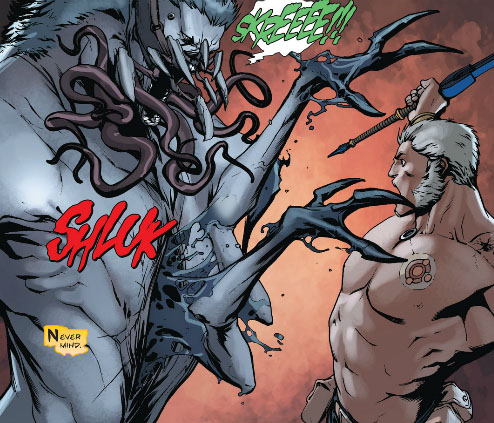 Taking Wiglaf as his guide, Beowulf tracks Grendel to his lair, which is actually a hi-tec bunker wherein Grendel recovers in a giant vat. Beowulf is about to cut him down when he is stopped by Grendel’s mother.

Now, the thing I like the most about this title is hunting for ties to current DC characters. I’m going to be a big ol’ nerd with this one; I suspect Grendel’s mother is some version of Genevieve Cray. Back in the day, Alan Moore did a three-issue arc on Deathblow about Genevieve, who is a clone of Michael Cray. It could very well just be because you don’t encounter a ton of bald ladies in comic books, but the whole clone/bio-engineering aspect of Genevieve’s story fits in with the “sorcery” seen here. 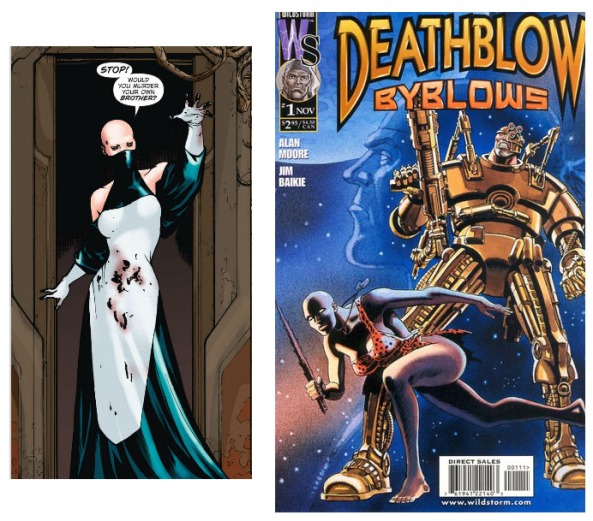 This title remains one of my favorites. I love these two stories, Amethyst for its fantasy aspect and character development, and Beowulf for its horror and possible DCU Easter eggs. This book is blessed to have not one incredible creative team, but TWO; after some of the hot mess issues we’ve read recently *coughCATWOMANcough*, it’s nice to get back on track with something so worthwhile.

Taylor: Shelby, I too am continuing to enjoy this title for its overall quality and for the simple fact that, unlike a lot of titles I’ve been reading, it actually has me waiting with bated breath for the next issue. Additionally, like you said, it’s kind of amazing to have two fun titles, that are considerably different in tone, packed into one issue, perhaps making Sword of Sorcery and Beowulf one of the best bang for your buck titles DC is offering.

One of the things you mentioned this title doing well, Shelby, was the development of its characters while the plot still manages to address all sorts of intense action and intrigue. The scene in House Diamond with Hadran that you mentioned is a really good example of this, and in a title with so many characters, I like that Marx lets us know what kind of a person a character is in a relatively simple and effective fashion. Whereas other comics *coughTeam7cough* struggle to develop voices and personalities for their characters, Sword of Sorcery seems to do so with ease. Whether this is a conscious effort or just the work of a storyteller who has an intuitive understanding of how to develop a narrative I can’t say, but it makes the world of Amethyst somehow incredibly believable — a hard thing to achieve when we’re talking about a world where magic power is transferred via bloodlines. I think this speaks all the more to the strength of Marx’s writing since any story we as readers genuinely care about must have characters we care for and find believable. I mean, what teenager wouldn’t find lizard on a stick unappetizing? There is truth in that.

What also sells me on this issue is the art. Shelby, you briefly mentioned the sweeping landscape shots that appear in every issue of this title so far, which is something I wanted to talk about before, but somehow never was able to work into a post. First, I think these landscapes shots are beautiful and also necessary for the creation of the world our heroes our inhabit. As a new reader to this title, I have little to no idea what this whole Kingdom of Amethyst is all about so I need a few pointers to help me understand what kind of a place this is that Amaya has been taken to. Luckily, Lopresti and Saiz seem to understand this and provide the reader with ample visual ques to help establish where we are and what kind of land it is. 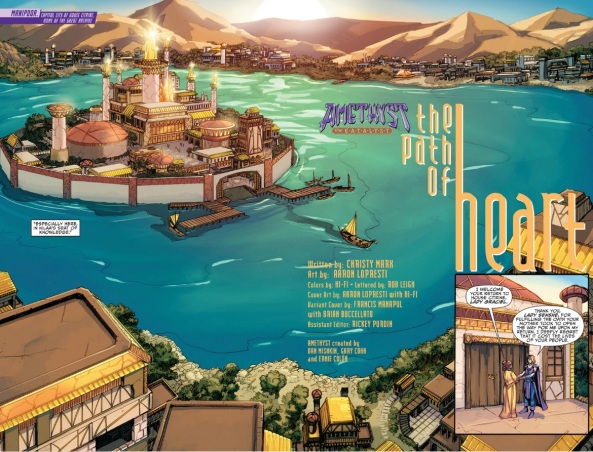 These grandiose visuals also help set the tone of Sword of Sorcery. This isn’t a title that’s simply about the squabbles that exist among royal families, hell it’s not even limiting itself to one city like a lot of titles. Sword of Sorcery is dealing with intrigue and high adventure that is similar in scope to such huge epics as Lord of the Rings or Game of Thrones. The art in these issues, and establishing shots such as the one seen above, help us understand that the action of this comic takes place on a grand scale.

One last thing I’ve noticed about this title which I would like to bring up is the number of women who are in power in Marx’s universe. In this issue we see that Lady Senshe is the leader of House Citrane and the Great Archive which by my count brings the number of women leaders in this title to three, which is one more than the male leaders we have been introduced to at this point. In an industry that is so frequently male dominated both narratively and creatively, it is refreshing to see a female writer give so much power and development to female characters while having that power feel both natural and appropriate. Further, these female leaders are not simply paragons — they all have diverse aspects to their characters and each has their own unique motivation. While this might not seem commendable in itself at first, try reading Catwoman or the Moloch installment of Before Watchmen and see if that changes your mind.

Also poor Beowulf. I never give it its proper due since it’s crammed in with Sword of Sorcery, but man, it really is fun. Seeing that Grendel is made from the same stuff of characters from other titles is so much fun. Also, I love seeing arms growing out of stomachs.