Drew: Chekhov’s gun — the principle that a writer should not introduce a story element in the first act unless it comes into play by the third — is meant to keep stories simple and efficient. Details that don’t matter can clutter a story needlessly, making for a flabby, muddy narrative. On the other hand, when handled obviously, knowing that every element introduced must come into play can ruin an otherwise good surprise. In Justice League Dark 14, we find Jeff Lemire applying Chekhov’s principle to the House of Mysteries, delivering a kind of comedic interlude in the midst of Zatana and Tim Hunter’s disappearance.

The issue opens with A.R.G.U.S. arriving on the scene to clean up in the aftermath of the Annual. Steve Trevor brings in Dr. John Peril to help Constantine and Madame Xanadu track Zee and Tim, but the only plan he can come up with requires Dr, Mist’s help. Meanwhile, Frankenstein, Black Orchid, and Princess Amya (now THERE’S a team) are bored out of their gourds. They decide to explore the House of Mysteries, which is obviously a big mistake. The house is constantly reshuffling rooms, and each one seems to contain some kind of horrible monster or another. Eventually, Orchid  stumbles upon a room where Constantine is keeping notes on EVERYBODY, but she doesn’t tell the others. Back outside, the Phantom Stranger shows up to warn Constantine about the impending Trinity War.

This issue seemed mostly like a lark, but that last bit solidifies this title as a point of major intersection for the DCnU. Perhaps its appropriate then, that the issue demonstrates how much fun can be had when characters from different titles get together for some frivolous adventures.

And they are frivolous, but I mean that in the absolute best way possible. It’s a haunted house story, and Lemire embraces everything that that means, which includes a heck of a lot of cliches. To his credit (and the credit of the characters involved), the predictability of what’s happening is openly acknowledged.

These adventures are so much fun, in fact, that it’s almost a shock when we’re reminded of the ENTIRETY OF THE DC UNIVERSE. Constantine’s motives aren’t clear, but it’s totally in character that he’d be keeping tabs on absolutely everything. 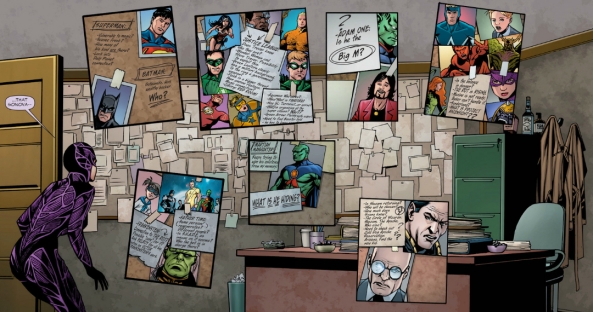 This doesn’t really convey any information — it mostly reminds us of questions that are already duly familiar to anyone following these titles (a kind of “previously on…” catch up for the DCnU) — but it does present a number of avenues this title could go down.

Perhaps my favorite thing about that image, though, is just how layout artist Graham Nolan doesn’t waste an inch. The mini closeups of only small swaths of the board give us some details, while making it clear that Constantine actually has WAY more plates spinning right now. More importantly, he makes it absolutely clear that this is Constantine doing this research — note the several full ashtrays, half-empty liquor bottles, and the coatrack (hilariously) draped with multiple trench coats.

This issue was a lot of fun, and managed to make me both excited for the future AND the DCnU in general. Taylor, did you enjoy this issue as much as I did? I know you’re not quite as immersed in all of these titles, so I wonder if much of the information comes off as needlessly cryptic. Also, the Phantom Stranger showing up is never a good sign. He’s gonna betray everyone, right?

Taylor:  To put it succinctly, yes Drew, I did enjoy this issue of the title if for no other reason than it has built up so much good will and has been pumping out great issue after great issue. Given these circumstances, I wasn’t put out by an issue that was less serious in tone and not as focused on the plot as the issues that proceeded it. I think what really makes this possible is that the characters in this title really are all pretty great — and even those who are not regulars have been integrated in such a way that they feel both like unique and entertaining additions. Frankenstein is an exemplar of this as his old-school chivalry and sense of honor are character traits which no other member of the JLD team possesses. Additionally, Amaya brings her unique worldview to these happenings and it’s always fun to see how she reacts to the weirdness going on around her since she is both a teenager and relatively new to all the magical weirdness that has become her life.

Another reason I enjoyed this issue is that it kept its roots in the same “what the fuck, just go with it” tone that, to this point, has buoyed this series from taking itself too seriously. Usually, the moments that recognize the weirdness of what is going in an issue are handled by the always tongue-in-cheek Deadman, but in this issue they are given to all three of the heroes in the primary story line. That the House of Mystery is but an annoyance to Frank, Amy, and Orchid — rather than being any real threat — simply makes for a number of jokes that are entertaining on a number of levels. I loved the panel where Frank opens a door to see a giant fly man being eaten by a giant venus fly trap only to be nonplussed by it.

And while it would be easy for this issue to descend into a simple, yet fun, hi-jinks plot it is nice to see that there is still some meat to it, as you mentioned Drew. Even though I’m not as well versed in the DCnU as a lot of our readers, I didn’t find the references to to the Rot, the regular Justice League, and other extended universe titles and themes off-putting in any way. In fact, I found my reaction was quite the opposite – I now want to look into these titles and read all I can about some of the things referenced on Constantine’s Board of Intrigue. I think this demonstrates one of the more understated and quality aspects of this title: its attention to detail. The references made to some of the finer points of the various titles are a nice touch and further has me wanting to know more about everything DC related. Also, the scar in Frankenstein’s skull in the skeleton reflection mirror was awesome.

Everyone knows the origin story of Frankenstein (even if they haven’t read his titular adventures) so it’s nice to see that reference reflected in the artwork here. Basically the overall quality of this title, as demonstrated here, makes it a good read even if the issue at hand runs a little thin on the story line.

Oh, and yes, I think the Phantom Stranger will totally fuck things up for our heroes – that’s basically his MO. What’s interesting to consider in this case is the fact that John Constantine maybe deserves it.