Shelby: Last month, Drew talked about Jeff Lemire thwarting our expectations to surprise us in the best way. This month is no different, as he sprinkles some obvious and not-so-obvious surprises throughout the issue. And really, he’s made it easy for us to be surprised; with Rotworld, Lemire has turned the DCU into a place where literally anything can happen. Kill all the heroes and leave the world a rotting shell? Sure! Turn characters we all know into horrifying monsters who want little more than to tear our protagonist limb from limb? Why not! In a universe where all the rules have been broken, even our wildest guesses fall short of the mark.

Our plucky heroes of the Red have stumbled upon New Gorilla City, and Grodd is not fucking around. Steel tries to fight them off, but there are too many. All looks lost until Frankenstein shows up with a homemade army of Frankenstein monsters on Frankenstein horses! A fight ensues, and the gorillas are defeated. Buddy tries to talk Frank and his crew into joining them on their quest to the heart of the Rot, but Frank won’t go; he says it’s too dangerous, and when an invincible monster says something is dangerous, you should probably listen. There is, however, an alternate quest to build XP first: a prisoner-of-war held beneath Metropolis, too strong to be converted or killed. Maybe if they can free this prisoner (who maybe is Superman), then they can storm the castle. Buddy drifts to sleep as the army heads to Metropolis, and dreams that everything is ok, he’s at home with his family and nothing is wrong. Nothing, that is, until he goes into the backyard, begins bleeding from the eyes, and finds Cliff, his chest gaping open and his mouth filled with maggots. With the prophetic advice of “don’t turn your back on the boy, he won’t be dead yet, ” Buddy wakes up to find Metropolis covered in…plants? But not plants of the Green, so it’s pretty weird. They find the prisoner, and it’s… BUM BUM BUM! Green Lantern?

Let’s work backwards on this, starting with the surprise reveal. 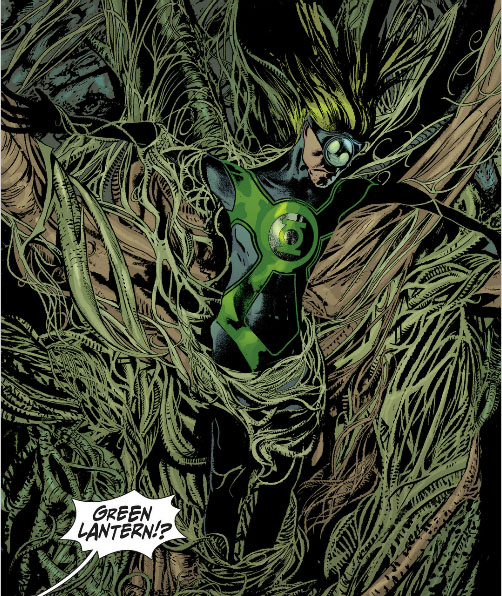 I guess, question one is which Green Lantern are we talking about? I don’t recognize the uniform, but it looks like something Kyle would conjure up. On the other hand, though, the last time we saw Hal he was involved with death and the Black Lanterns, so I wouldn’t be surprised if Rotworld churned him out somehow, and he was too damn stubborn for Anton to convert. Lemire really pulled the rug out from under me on this one; with the vines and greenery, I thought maybe we were going to get a meetup between the Red and the Green a lot sooner than I was expecting. I never would have guessed we’d find a Lantern strung up down there. We’ve seen Anton use plant-like materials in the past, so that’s not totally unusual, but I can’t even begin to speculate on what exactly happened in Metropolis. Speaking of, what the hell happened to Superman? Steel said he just up and disappeared one day, which doesn’t sound like our boy Clark in the least. So, what could drive him to abandon his city like that?

I want to talk a little bit about Cliff’s message to Buddy in his dream. I think this counts as a big reveal as well, but the credit for this one goes more towards artist Steve Pugh than to Lemire.

It’s the dead, glassy eyes and the maggots that really do it for me. I mean, we all knew Cliff was not going to be ok, that Buddy would go into the backyard and find something awful. I personally was not prepared for just how awful it was going to be. And what about his message, who is “the boy” Buddy should keep an eye on? My first thought was Cliff was talking about himself, but after reading Swamp Thing 15, now I’m thinking he might be referring to William Arcane. Buddy is bound to confront him for his part in taking Maxine to Anton, and I can see how the way William was incapacitated in Swamp Thing could lead one to think he might be dead. Honestly, though, the way Lemire is shaping this title, Cliff could be referring to someone completely random and unexpected: Damian, maybe, that would be a good random guess.

Lemire continues to seriously impress me with this title. He just keeps on setting up reveals, and knocking them down for us in ways we didn’t predict. Even when we can predict it, like when William led poor Maxine to the trap in the flashback, there’s still something there to keep us off balance. In this particular case, it’s both the inclusion of the Hunters Two in the trap, as well as the sudden transition from Timothy Green, III’s adorable anime style to the horrorshow that is Steve Pugh. Every month, Lemire reminds me just why it is he’s on my list of  “will read their grocery list” authors. How about you, Scott? I know you aren’t quite as familiar with this universe; did you get caught up on the Animal Man back issues? Are you as impressed as I am with Lemire’s ability to keep us guessing? How awesome is a Frankenstein cavalry?

Scott: Lemire’s ability to keep us guessing has been crucial to the success of the past few issues. I can’t help but feel like Rotworld has such potential for an epic collapse at any moment, but it hasn’t happened because of the ingenuity of the writers. At the top of the issue, Lemire poses the question, “Is there anything left to fight for?” He’s admitting that his character’s motivations are unclear, or even non-existant, which means that he has extra work to do to keep the story interesting for the reader, and thus far he has been up to the task.

The Green Lantern reveal was great for a couple reasons. Lemire spent a good chunk of time forecasting a Superman appearance in this issue. In fact, he was hinting at it so blatantly that you knew Superman wasn’t actually going to be the prisoner at the end- it wouldn’t have been shocking enough for Lemire. But I expected whatever they found down there would tell us something, resolve some storyline from earlier in the issue. Instead, we get Green Lantern and a whole new crop of questions without tying up any loose ends. Additionally, I had assumed that any character who hadn’t been seen or discussed was dead, but seeing Green Lantern complicates that. Normally I would say adding a new character when there are so many other unresolved storylines is a bad idea, but I think this provides the glimmer of hope that Rotworld has needed. Green Lantern may be joining the crew and the Superman appearance is still to come? I like where this is going.

I was happy to see Frankenstein play a big role in this issue. Animal Man and Swamp Thing have been referencing each other throughout the Rotworld event, but Frankenstein seemed to be occupying his own separate sector of the universe until now. Buddy apparently didn’t even know Frankenstein was real until this issue, which came as a surprise to me. Frank adds a certain level of badassery to whatever he’s doing, but he also has less at stake than either Animal Man or Swamp Thing, so I think this crossover event, and Frank’s title in particular, is going to benefit greatly from having the heroes collaborate more.

So, I guess it was obvious the Maxine-William Arcane sequence wasn’t going to end well, but Maxine’s sincere belief that her family had been saved made it the reveal truly heartbreaking. Shelby, it’s funny that you refer to Green’s style as “adorable”, since I found his drawings of William to be some of the most haunting of the issue.

The juxtaposition of Green’s simple, vibrant designs and the deceitful, almost possessed look in William’s eyes is more unsettling than any of Pugh’s hideous monsters.

Lemire pulls off the impressive feat of leaving us with more questions than we came in with, while still crafting an issue that feels entirely satisfying. Surprise has been his secret weapon thus far, but I think he’s now built the series up to a point where he can start revealing answers rather than setting up more questions, which is really exciting. Of course, I’m not getting my hopes up that he’s actually going to do that- he has a way of thwarting my expectations. So where is Superman?