Taylor: Imagination enjoys an awkward place in our modern day society. While most people and institutions are quick to praise the use of imagination it is far more rare to find those who actually appreciate it. Seldom are we, as an audience, treated to something that is truly unique – whether it be in a movie, music, a book, or any other medium. While the complexities of this relationship with creativity are of too much detail to go into here, it will be said that a fair amount of imaginative endeavors are rebuffed due to the general population’s resistance to anything that diverges too far from their expectations. Many inventive music artists aren’t signed to major labels because their music isn’t traditional pop; many writers have to rewrite parts of their book so they will appeal to a larger base audience; and many TV shows craft generic characters and plots so that they will be liked by many, but perhaps loved by few. However, the comic book industry has always managed to buck this trend in many ways since its very inception, which itself was a departure from accepted norms. Whether this is due to the type of reader the comic book attracts or the type of artist it employs for its creation, I can’t say, but it seems like comic books have always been more willing to take imaginative chances than their counterparts in other media. Dial H is a perfect example of this daring and the seventh issue of this title is an excellent example of its imaginative prowess.

A considerable amount of time has passed since the previous “hang out” issue of Dial H. Manteau and Nelson, in search for a relic they believe is associated with the dials, are jet-setting around the world following clues and gathering evidence in hopes they can find out where or what this relic is. Manteau, having found out that the Dials have become the object of cult worship, infiltrates one of their sects and finds out that a Dial related relic maybe be located at the bottom of the sea in (where else?) Atlantis. While looking for the Dial, Manteau nearly loses her sense of self – but not before she recovers a badge from a Canadian special forces unit, which suggests world powers are interested in using the dials for their own purposes. Meanwhile, a mysterious stranger only known as the Centipede investigates the events that happened in the previous arc of this title. Having tried to extract information from one of Dr. Wald’s former lackeys using threats, he results to force, revealing a strange set of powers and motivation that both largely remain a mystery at this point.

It’s pleasing to see our heroes in action after essentially taking the last issue off. While I thoroughly enjoyed the “hang out” issue, I recognize that to repeat such an issue would stagnate the plot and cause me to lose interest in what exactly was going on. Luckily, China Mieville also recognizes this and uses this issue to launch our heroes into action from the get-go. It’s gratifying to see Nelson and Manteau up and about and traveling around the world; the Dials obviously are artifacts that are operating on a cosmic scale so to see them confined to Littletown really would have done a disservice to their own mythology and this title as a whole.

Additionally, that the Dials have become an object of cult worship, even in Atlantis apparently, makes you wonder just what their role has been in the history of mankind. Have they always been around? If so, how have they impacted the history of earth? And as always, who made them and how did humans get their hands on them? These are cool questions and the answers to them could seemingly be any of a thousand different ideas. This type of interest is not easy to craft and I think Mieville should be given credit for making a wildly imaginative universe where these questions can come to fruition.

Similarly, I liked that he wrote such an imaginative character as the Centipede. While we are more than used to weird characters in this title (Daffodil Host?), there is something inherently interesting and imaginative about the Centipede. Perhaps this is due to his juxtaposing regular suit appearance, but his power, which maybe bends times and maybe replicates the Centipede himself, is far from typical and one can only imagine it will be used in interesting ways in the future. This superpower is also rendered quite well by David Lapham, who does a good job of showing us the Centipede in action while not giving away exactly what it is he is doing. 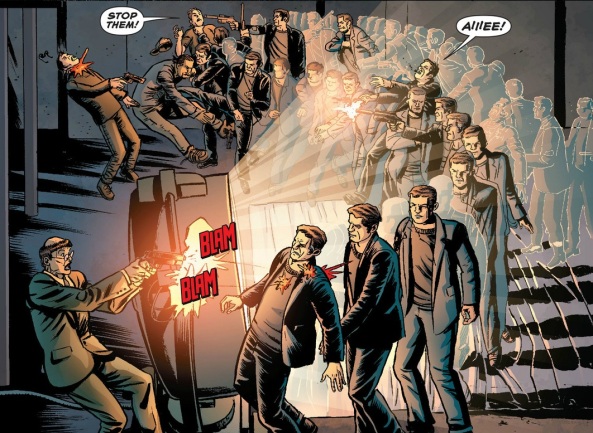 Similarly, the character design for the Planktonian is a beautiful and imaginative rendering of an odd hero, even by Dial H’s standards.

If asked, I think most people would struggle with having to design a superhero based around an organism that most have never seen with the naked eye. Would they draw specks in water or a giant crustacean looking thing? The choice to depict a grouping of diatoms (yes I had to look that up) is unique and something I can’t imagine coming to fruition in any other medium than a comic book. In the future I can but hope Dial H continues to push the boundaries of imaginative story telling both with its art and its writing because so far it has paid off in huge dividends.

So, Mikyzptlk, are you enjoying the weird imagination that’s on display here or do you find the unrelenting weirdness off-putting? What should we make of government interest in the dials? Also, we saw a reference to other heroes in this issue which has me wondering how Dial H fits in with the rest of the DC Universe. Your thoughts?

Mikyzptlk: Hey Taylor! To answer your question, I absolutely LOVE all of the weird, wild stuff that’s been on display in this book since issue 1. Is the unrelenting weirdness off-putting for some? Maybe. But who cares about them? Let’s have a Dial H love fest! China Mieville continues to surprise and delight me with the story of the mysterious Dial device. But, more importantly (and unexpectedly), he continues to tell the story of Manteau and Nelson. When the series first started, I honestly thought this book was going to be more of an anthology with every few issues changing gears and Dialers. I’m ecstatic that he hasn’t gone that route as I find Nelson to be very unique among the many other muscle bound superheroes of the DCU. Manteau’s introduction was also a very welcome addition to the book and yet another unique entry into the world of superheroes. Their uniqueness is something I find to be very interesting in this book and it’s clear the Mieville does too. So much so that I theorize that the potential loss of who they are is going to become a bigger part of the book in the ensuing issues.

It seems that both Nelson and Manteau are losing themselves in their myriad alter-egos. Even Manteau, who wears a mask to maintain her identity, is starting to get lost in the Dial heroes. 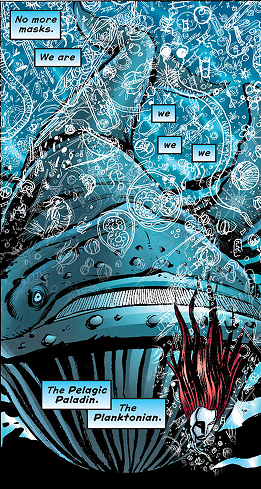 Manteau has been concerned with this issue since her debut and has been warning a seemingly uncaring Nelson of the dangers of losing oneself in the Dial. I can’t help but wonder where Mieville is going with this but I can’t wait to find out either. It’s a danger that is so severe and, again, unique among superheroes. Many heroes face life and death situations every day, but not many face the danger of losing who they are simply by using their powers. I’d take Kryptonite or the color yellow over that potential risk any day of the week.

Taylor, you also questioned the consequences of government interest in the Dials and where that could take this story. It would be interesting to see them try to replicate the technology behind the Dial devices that could perhaps lead to a Dial war of sorts. It would also be interesting to see them simply try to understand the Dials more. The ZERO issue introduced some strange worlds filled with heroes that the Dial seemed to be siphoning off of. I’ve been waiting to see a return to those worlds so I wonder if some strange government experiments could lead us back to them.

Lastly, Taylor, you mentioned how this issue referenced other DC heroes and I couldn’t be happier to see Nelson and Manteau mixing it up with the regulars of the DCU even if in reference only. I’m very interested to see what the reaction of the more traditional heroes of the DCU would be to the stars of Dial H. I can only imagine some very entertaining interactions the day that someone like Batman meets a hero like Cock-a-Hoop. Additionally since the ZERO issue, I’ve wondered that if the Dial can take powers away from heroes from other worlds, what would happen if it took the power of Superman? Would Nelson or Manteau suddenly know all of his secrets? Would Superman have something to say about it? Now that would be an interesting day for our favorite Dialers.