Today, Patrick and Mikyzptlk are discussing Suicide Squad 15 originally released December 12th, 2012. This issue is part of the Death of the Family crossover event. Click here for complete DotF coverage.

This issue ignores its obligation to the other members of the Suicide Squad and focuses on the conflict between Harley Quinn and the Joker. They have this epic brawl in the bowels of the Ace Chemical Plant, during which Joker accuses her of never having been crazy in the first place. Harley concedes that she might not have been the same kind of monster, but she did always love him. Not satisfied with that response, Joker locks Harley up in some unexplainable dungeon (ALL CHEMICAL PLANTS HAVE DUNGEONS) next to what he claims are the skeletons of countless previous Harley Quinn (Harleys Quinn?). She eventually escapes by… well, it’s not clear – it bloodies her wrists though, so that means it’s hard core.

Where to begin? There’s so much anti-logic in this issue, it would make John Hodgman blush. I think it’s the Joker – that character gets inside everyone’s heads. And that includes the lesser writers that take a crack at writing him. I can see where there’s value in a Joker narrative that resists being comfortably understood, but Adam Glass seems to have equated “nonsense” with “terrifyingly disorienting psychodrama.” One of those things is compelling, the other frustrating.

If you’re having a hard time working out what’s happening there, you’re in good company. Joker’s lowering Harley — who is strapped down to a stretcher — head-first into a vat of chemicals. Harley frees her legs and her torso (without the use of her arms which are still in the straight jacket), and then grabs Joker’s neck with her ankles. He falls, but instead of tumbling head-first into the pit, he slides down feet first. Luckily for both of them, there’s a small stalagmite that catches Joker’s Joe’s Garage jumpsuit, and they both stop falling. Harley shreds the straight jacket and flips to safety. None of this makes any sense. Never mind that we can see there’s no stalagmite in the first panel, gravity doesn’t work this way, straight jackets do not work this way, and mere references to the Kama Sutra do not make this Joker laugh.

The issue is full of these details that ignore reality. At one point the Joker takes a bite out of Harley’s ear, but the real danger is that he’s just delivered some kind of poison to her… from biting her. This is MOMENTS after she’s been bitten by a rabid hyena. RABIES. And Harley responds by taking a bite out of Joker’s tongue, but that doesn’t seem to slow him down or even impede his ability to speak! Then there’s the matter of Harley’s escape: it looks like she was shackled, and the shackles were never undone (should have saved some of that escape artistry for this part of the issue, eh Harley?), which means that she must have broken her own hands squeezing them through. That’s fine and all, but why would that make her wrists bloody?

And further, why does it only take a few hours for her to break out and then travel from Gotham City to Bell Reve – which, if I know my DC Universe geography, is like 1,300 miles away?

The worst is that this same kind of nonsense extends to the choices the characters make. First, there’s Amanda Waller. Waller has installed a set of cameras in Harley’s eyes with the expressed purpose of waiting until the Joker resurfaced and then using her to spy on the greatest evil man has ever known. So when she can see that Joker is about to submerge her spy in a vat of acid, what does she do? Not shit. Never mind that Harley is a human being that has been working with her for the last however-long, those cameras are an invaluable resource. Waller does nothing to defend her assets or her people. That makes her stupid and evil – way to characterize your heroes, Glass.

And the final “big” revelation that falls under the I Just Don’t Believe That category is that Joker had previous Harley Quinns, all of whom he locked up in the basement Ace Chemicals to die alone. Keep in mind, the only reason Joker is capable of this right now is because he’s supposedly the idealized form of himself – one that has shed his humanity. That implies that he previously wasn’t capable of something like this. Y’know, or he’s been capable of doing it like a dozen times in the past. Beyond that, this revelation states that Harley is not special and never was. I hate this. What’s interesting about Harley Quinn? Let’s make a list.

Make her one-in-a-series and suddenly, she’s not so interesting. Also, come on, her name in Harleen Quinnzel – she was BORN to be Harley Quinn.

Seemingly to justify this sort of behavior, Joker prattles on and on about losing his humanity and how she needs to lose her humanity too and about how the hyenas are better now that they’ve lost their humanity (side note: they are hyenas, they never had any humanity). I guess if everyone is just going to behave like fucking monsters anyway, he’s actually right.

For me, this is the quintessential expendable comic: the voices of the characters are bland, their motivation is murky and the art oscillates between cheesecake and sloppy. It’s so crummy, not even Joker scrapping his face off the wall is going to save this one for me.

Mik – transition: I don’t feel like making one. Deadshot’s still alive. We all knew that was going to happen.

Mikyzptlk: It’s funny that you don’t feel like transitioning to me because I really don’t feel like writing about this crummy comic. Normally, it would at least be a bit fun to trash a comic as bad as this but I think this comic has reached such a level of “crummitude” that it warrants being completely ignored instead. I honestly don’t even know what else there is to say about this as I feel you’ve covered everything that makes this such a poorly and unimaginatively written book. What I will say is, it’s tie-ins like this that give comic book crossovers a bad name. Worse than that, I feel that tie-in’s like this weaken the overall narrative of Scott Snyder’s epic tale taking place in Batman.

There are many books tying in to DotF. Some are doing better than others in the midst of all of the Jokerized chaos, but books like this (and Catwoman) are SO BAD that it indirectly sullies my experience of the overall story taking place in Batman. The final page of Batman 15 concluded with the extremely chilling revelation that Joker actually loves Batman. Here, Glass tells us that he also loves Harley and that he actually needs her too because he wants her approval or something. Whether I believe this or not (which I don’t), is inconsequential because, it makes the Joker’s love for Batman less unique and less interesting. Snyder has just finished establishing that, besides hate for everyone and everything, the only other emotion he has is some kind of super-crazy-freaky love for Batman. Reading that in Batman 15 chilled me to the bone. It’s such a unique and interesting take on their character dynamic. It makes so much sense that even if you’ve never considered it before, it’s instantly acceptable. Then Suicide Squad comes along and says he loves Harley too? Because he wants her approval?? But has, like, a million dead versions of her in a basement??? Yeeeeeahhhh, I think it’s best to just forget this ever happened and move on with the rest DotF. Also, I’m probably never going to read this book again unless Patrick makes me. Have mercy Patrick, have mercy.

Oh, and yeah, Deadshot’s alive. Uh…well, if he was written compellingly I guess I’d give a damn. It was obvious that a character as well known as him wouldn’t actually be killed and it’s made more obvious still by the fact that he (and the whole universe he resides in) was just recently rebooted. His “death” was a cheap ploy written to keep up reader “interest” in this poor excuse for a title. Also, what a weak reveal! I mean, it was literally shoved in right at the end. I love the panel in the upper left corner of the heart monitor beeping. As if I’m going to look at that panel before seeing the GIANT one of Deadshot waking up. This scene may have actually worked if it was laid out competently. Here, just take a look at the last two pages of the issue. 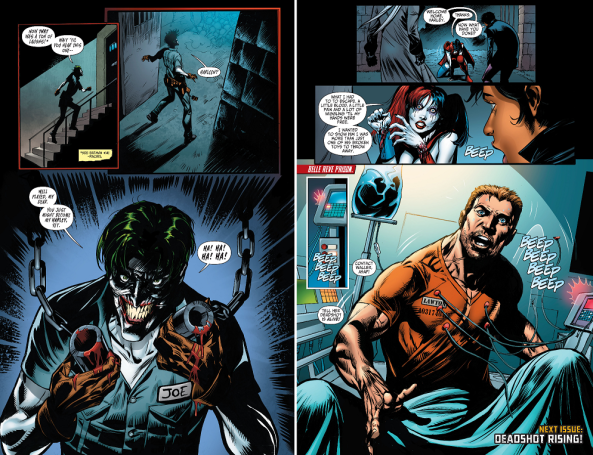 Improved Layout After 5 Minutes of Paint. 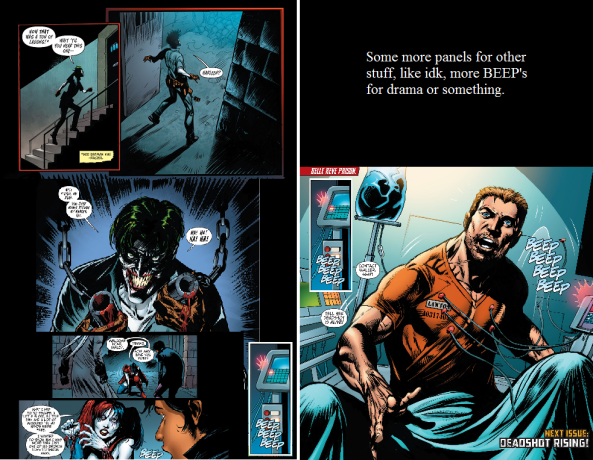