Michael: One of the themes of almost any time travel story is exponential chaos. Messing with the space time continuum can get out of control fast. The time-travel narrative can get similarly disordered as alternate worlds open and paradoxes proliferate. When the protagonist can exist in and explore these permutations, like Dr. Manhattan, drama gets complicated and the context needed to recognize a satisfactory ending gets fuzzy.  In this issue, “Ego Sum”, J. Michael Straczynski and Adam Hughes try to gracefully execute a clunky, inelegant story solution to the reckless splitting of worlds that results in a nuclear holocaust.

Sitting on Mars after the earth’s destruction, Jon realizes that he split the world into two alternate universes when became the quantum observer in his own transformation into Dr. Manhattan.  Since then, he’s split the world many times by exerting his omnipotence to influence the outcome of certain events, choices which lead to nuclear destruction.  Once he realizes the his mistake, he thinks back to his time as a watchmaking apprentice for his father, who teaches him that a problem might only be fixed if you examine it closely, more closely than what seems necessary or possible.

As his father gets choked up talking about Jon’s mother, we are transported to the early stages of WWII. Jon’s father, a gentile, has refused to abandon his Jewish wife in order to smuggle their child out of occupied territory. Instead, they move together in a wagon for the border, with Jon hidden in a box.  When Nazi’s stop them, Jon’s mother bolts from the wagon to distract the Nazi’s. John’s father manages to disarm and kill the Nazi soldiers, but not before Jon’s mother is killed. Back at the workshop, his father reminds Jon that his mother made a conscious, selfless sacrifice to give up every future choice she might have made for her son’s safety. Then his father adds, somewhat inorganically, that “there’s nothing broken so bad that you can’t put it back together again with enough effort”.  Now, Jon sees his mistakes as one simultaneous (or timeless) fixable moment.

Jon reveals that the only way to collapse these universes, is to remove or reverse every choice he’s made – to leave forfeit any of his pre-Manhattan actions or choices would be the continued existence of one or more dystopian worlds. Jon then combs through his life, tweaking decisions to ensure that he gets his job as a research scientist at the nuclear laboratory, that he meets Janey and gets involved, and that when he goes to the quantum chamber to retrieve her watch he gets trapped. Finally, the schisms are collapsed into one moment – a reassuring Dr. Manhattan trapped with a scared human Jon seconds before the transformation. 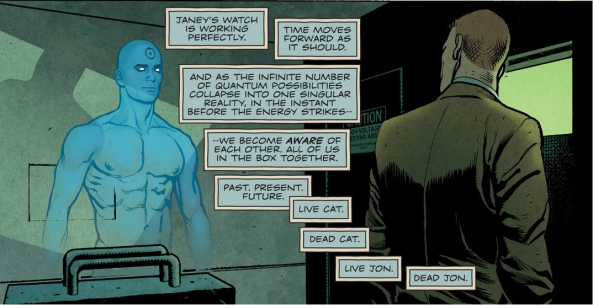 I don’t know, Drew, while I enjoyed this issue, I was all-to-aware of how cheap this resolution is (so far).  At this point the Jon’s arc is:  1) Went too far back in time and changed things, thus splitting worlds 2) Realized this was bad and resulted in mass death 3) Fixed the problem with ultimately very little to no sacrifice, despite sacrifice analogies being throne around and Dr. Manhattan sitting on a Mars rock contemplatively. We’ve talked before about the problems posed by writing for such a massively powerful character, but the ease with which Dr. Manhattan undoes things, makes this like a dream-series that never happened. I would have very much liked to have scene Jon have to deal with these worlds before he effortless collapses them.

Drew, I’d like to know how this issue fits into your view of the series so far. I’m sure I would feel differently if Jon solved his problems more dynamically, but as it is, I’m reminded just how much this series is like reading a comic about God – he gets himself into a real jam (by thinking of one) and then gets himself out (…by thinking about it).

Drew: One of the central conceits of Watchmen is the notion that the presence of a being of Dr. Manhattan’s power would utterly deform history. He’s able to single-handedly win the Vietnam War, which makes Nixon insanely popular, which causes him to be re-elected again and again, etc. The excerpts from Under the Hood make it sound like, without Dr. Manhattan, the other part of Watchmen history that deviates from reality — that costumed avengers were real — would have passed without so much as making a dent in history. That is to say, the Watchmen universe without Dr. Manhattan should look virtually identical to our own, so when this issue posits that Dr. Manhattan must exist in order to avoid total nuclear war, which we simply know isn’t true. This means I don’t just find the solution to be boringly low-stakes — I don’t even buy the problem in the first place.

The notion that Jon actually can change things — and that his “I’m just a puppet who can see the strings” speech from Watchmen is a front — is kind of interesting, suggesting that Jon is the arbiter of Gottfried Leibniz’s “best of all possibly worlds.” The problem here is that Jon himself can’t actually see into the future of the timeline he’s holding himself to, so how can he possibly know it’s the “best”? He calls his version of events “what it needs to be, what it must be,” but never gets any more specific about why.

The fact that Jon opts for the Watchmen timeline we all know is a bizarre moral statement on Straczynski’s part, suggesting that Ozymandias’ worldwide peace — no matter how temporary — was worth the millions of lives it cost. Unless he’s talking more about Watchmen than its timeline. In this way, Straczynski isn’t so much suggesting that the events of Watchmen are the best possible world, just the best possible story. I’m attracted to that kind of loving homage (who can really begrudge someone praising Watchmen?), except for the way it posits Straczynski’s additions to the narrative as just as good.

Moreover, it kind of negates the meta-commentary of the previous two issues. Issue one posited that we’re all quantum observers, and that every time we open a box, we are collapsing alternate realities. At the time, I thought it was bullshit, and while the understanding of physics is still lacking, the notion that this story could be anything until we read it was more compelling than I realized. Unfortunately, this issue finds Straczynski assuring us that, no, he gets to decide where this story is going, and that there are going to be Nazis whether we like it or not. This would be fine if the story he settles on were even remotely interesting, but — like Michael said — no actual action is taken. It’s the least dynamic solution to a problem that had heretofore been illustrated rather dynamically.

That reminds me: Adam Hughes sure is drawing some fantastic issues. I’m particularly fond of his treatment of the scenes in Germany, which don’t require any of Straczynski’s copy to convey the action (or emotions) of the scene. I may have my issues with this series, but it’s hard to snark on a page like this. 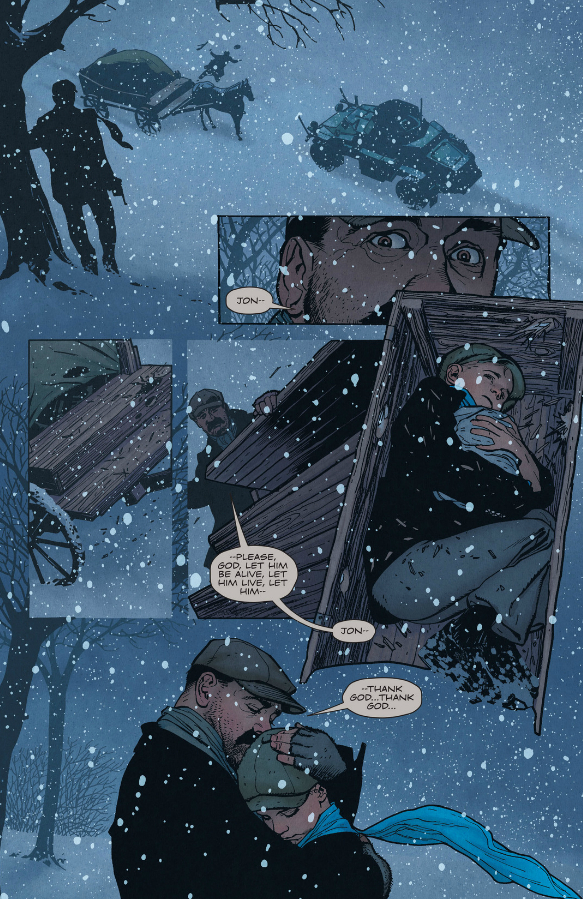 I just wish the storytelling were equally impervious to snark.

9 comments on “Before Watchmen – Dr. Manhattan 3”