Today, Drew and Patrick are discussing Supergirl 15, originally released December 19th, 2012. This issue is part of the H’el on Earth crossover event. Click here for complete H’el on Earth coverage.

Drew: Ironically, I’m kind of a sucker for stories about con men. I like movies like Matchstick Men and Catch Me if You Can more than they probably deserve, and the scams from LOST and Justice League Dark might be my favorite parts of those series. With so many compelling, relatable con artists running around fiction, it’s easy for me to forget that they’re generally bad guys. It’s somewhat understandable that they aren’t depicted negatively more often; we like to think that we’re smart, and that the protagonists we identify with are also smart, so it’s a risky move to depict a hero being taken in by a scam. Mike Johnson attempts that risky move in Supergirl 15, with decidedly mixed results.

The issue opens with Kara reminiscing about her best friend, who moved to Kandor just before it was bottled by Brainiac (which, incidentally, was just before Krypton was destroyed). H’el startles her (as he is wont to, creeper that he is), and insists that she follow him somewhere he knows she wouldn’t want to go if she knew where it was. Kara agrees, which is essentially the last point I’m really able to relate to her in this issue. Listen, if there’s a reason I wouldn’t want to follow someone somewhere, then I’m going to guess that it’s a good one. If there’s a better reason to follow them, anyway, then why not just tell me? They’re trying to save a planet that blew up over 20 years ago, so it’s not exactly pressing that they act quickly — there’s really no reason H’el couldn’t take the time to explain himself here, but there’s especially no reason Kara shouldn’t insist that he take that time.

Anyway, H’el teleports them to the Fortress of Solitude (which he booted Kal and Kon from in Superboy 15), where he explains the secret of his plan lies in the bottle city of Kandor. He shrinks her down (again, before explaining what his plan actually entails), and asks her to retrieve the quantum crystal as a power source for whatever it is they’ll be doing next. He re-bigulates her (which is a concept so ridiculous, it makes me want to laugh out loud and chortle), then this happens: 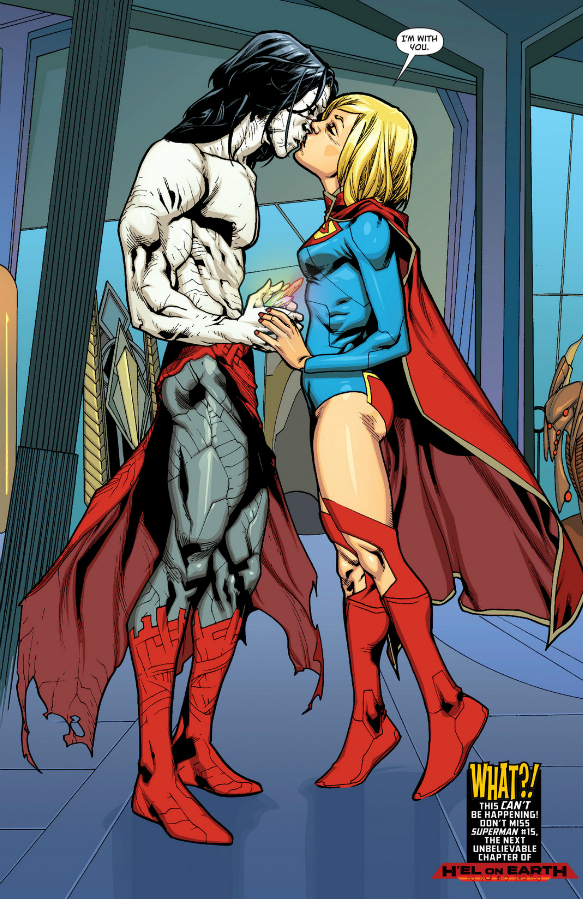 I get that H’el is ostensibly offering something Kara wants more than anything in the world, but he’s being so loose with the details here, it’s hard to take any of what he says at face value. The fact that Kara is taken in by this whole charade is a bit tough to swallow. Is she just blinded by her desire to return to Krypton, or what?

Johnson doesn’t give us much to go on, but, I’m inclined to believe that Kara is actually under some sort of hypnosis. This would explain her willingness to buy what would otherwise trigger even the least-developed bullshit-detectors. We’ve already seen that he has some psychic abilities (including giving Kara the ability to understand and speak English back in issue 14), so it doesn’t seem totally out of the question. In fact, she seems downright out of it immediately before they kiss.

I’ll accept that this may be a willful misreading on my part, but it’s really the only way I can accept what’s going on here. I suppose it’s important to remember that Kara’s only like 16 (which makes the kissing EVEN GROSSER), but I don’t even think naiveté could explain away following a guy who tells you you wouldn’t want to go if he told you where he was taking you. That’s just straight-up dumb.

Part of my problem may be the structure of this crossover. As a subplot of a larger narrative, I’m willing to accept that one of the good guys might fall in with the bad guy, but as a standalone issue in a series where Supergirl is the hero, this issue just doesn’t make sense. Also, H’el’s threat is still largely unknown. He’s been deceitful to Kara and downright antagonistic to Kal and Kon, but he’s done nothing yet to suggest that he’s anything worse than a kind of rude guy just trying to save his home planet. The cover of this issue asks if Kara would doom Earth to save Krypton, which is where Patrick has suggested this was going, but there’s still been nothing in the narrative to imply this — H’el is a “villain,” but only because we all just kind of assume that he is.

I was excited for Kara’s role in this crossover — I would totally accept that she might throw over Earth if she could save Krypton — but we really haven’t cashed in on any of her emotions. Even if she isn’t under hypnosis (and it’s probably not a good sign if I can’t really tell), she doesn’t seem nearly as emotionally invested as she should be. We’re left with rote plotting, instead of the character work I was expecting. What do you think, Patrick, did we get conned?

Patrick: “Conned” is an interesting way to put it. We’ve been successfully marketed to, through a series of A+ concepts and buzzwords: time travel, cross-over, Krypton-revived. I mean, Christ, we’re not made of stone. I’m still holding out hope that I will end up finding more to like about this event than to dislike, but maybe we should have noticed that the only reason we’re reading any of these series is because they take part in this special event. A very special episode of Terra Nova is still only an episode of Terra Nova, after all.

Drew, you mention that as an isolated issue (or even as part of the Supergirl series), this entry doesn’t make a lot of sense. But I’ll venture that it’s even more frustrating as part of the cross-over and all of that frustration is due to the event’s namesake: H’el. While the stickiness of his motivations (and the fact that he has yet to really prove himself a villain) are problematic, H’el’s powerset is bothersome to me. We’ve already seen him take all three of the Supers in hand to hand combat, and apply a little mind control, so he’s already a formidable baddie. (Side note: if he can just superpower his way into anyone’s mind, why would he even have to bother conning anyone?) Beyond that, though, he’s able to teleport himself (and anyone near him) to basically anywhere in the world, he can astral project AND he can shrink people. Those last two are an absurdly specific set of powers that allow him to do something mysterious instead of something equally effective: just asking Kara for help.

“But certainly there’s a reason he doesn’t just ask Kara for help.” Yes, disembodied questioning voice, there is a reason stated in this issue and throughout the event: H’el’s appearance has been ravaged by his journey through space.

While this end of this issue flips this, and goes for a Beauty and the Beast sorta thing, the overwhelming evidence for H’el’s villainy is that he really LOOKS like a bad guy. That should be enough to convict him, right?

Hey, can we take a second and dissect the logic of H’el’s plan and what exactly he’s expecting from messing with time? H’el wants to go back into time to before Krypton was destroyed and prevent its destruction. Good so far. He can use the power of Kandor’s quantum crystal to achieve this, but Kara objects: “Doesn’t the city need it?” And H’el responds that if they’re successful, Kandor will never be bottled and therefore wouldn’t need the crystal anymore. There’s a paradox a-brewin’ here, and I don’t like it.

You know what I do like, though? Kandor – a living, breathing chunk of Kryptonian society, preserved forever by Brainiac. There’s already some interesting things to say about how any of the Super-family might feel about having this living relic (and how it sorta validates Brainiac’s otherwise evil acts), but I really like that Kara has a direct personal connection to the bottled city in the form of her best friend Tali. Their carefree teenage adventures on Krypton may be trite, but the difference between their present situations couldn’t be starker: Tali is miniaturized, isolated and locked in stasis, while Kara is immensely powerful. It’s a dichotomy that makes this scene seem very exciting: 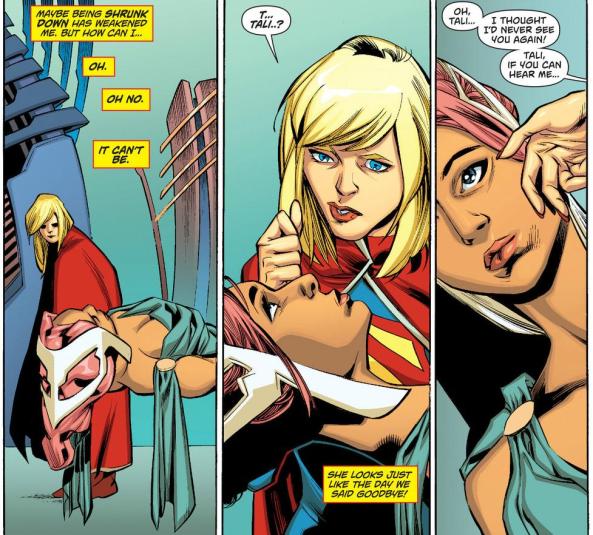 But the problem is that this doesn’t motivate Kara to save her friend here, but doom her by removing the city’s powersource. Why rush to save the past when there’s something in the present that you could fix?

Also, why is it that Superman and Superboy can go through all these costume changes and yet Supergirl still can’t find a pair of pants? For the sake of not repeating myself, I’m trying no to mention Kara’s scant panties in every write-up. I suppose it wouldn’t be so frustrating if she were also an intelligent, willful character — which I generally believe her to be — but this H’el arc has turned her into kind of a pushover.