Jack: Do you remember the moment you realized that Kill Bill: Volume 2 had only one fight scene? I think I watched it at least three times before I realized that it was about 80% less violent than its famously gory predecessor, because somehow the two films were so beautifully of a set. In some way like that, Hawkeye 6 features almost no action at all, yet it is decidedly cut from the same cloth as every issue in which Clint crashes out of a tenth-story window. The difference, though, is that in this case, the order is flipped.  It is the mundane, domestic story of Clint trying to learn how to take a few days off and enjoy the holidays which more nakedly exposes the question that all of the smash-smash-punch episodes have been driving at, ie, “What if this super-hero really were just a pretty cool person?”

We open with Clint’s trademark “This is bad,” which here refers not to an impending explosion, collision, or savage pummeling, but merely to the aesthetic state of Clint’s apartment:  piles of clothes and half-unpacked suitcases strewn about, a pizza on the floor, and a pile of home electronics that positively baffles him. We flash back to a rough night at work the previous weekend, in which the Avengers encourage Hawkeye to take a break and treat himself to a real Christmas vacation. Clint refuses to let Tony Stark replace his beat-up personal possessions. He begins unpacking his many boxes and is about to get swept up in a whirlwind of reminiscence, but life continues to happen. The neighbors are throwing an innocent Kwanzaa party on the roof when a gang materializes in front of the building with baseball bats.  Clint defends his castle, but is ultimately overcome by their superior numbers.  They beat him senseless, then explain that as punishment for all his cowboy/Robin Hood audacity, he must leave the building, or all its residents will be killed.  Clint berates himself for having the audacity to try to play the hero in his private life and decides to acquiesce to their demands.  In preparing to leave, he sends Kate his bow.  She confronts him about it, and he apparently decides to stay, duke it out with the thugs, and continue playing good citizen to his friends and neighbors.

As always, the charm of reading this story is largely in its good company, and that is not limited to Clint and Kate. Hawkeye takes place in a world where 50% of people are entirely delightful. For example, everyone is enamored with a show called, “Dog Cops,” which, to my great disappointment, is not real. Apart from an shiftless cable repairman and some thugs with thick accents, everyone is simple, earnest, kind, and so damned fraternal it almost hurts. What sounds more enchanting than cook-outs on the roof with your neighbors? Let me tell you:  cook-outs on the roof with your neighbors in Santa hats, that’s what. 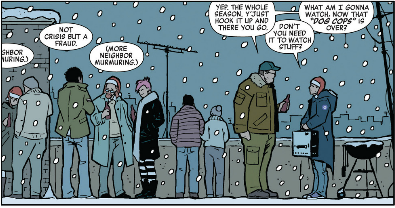 Clint’s rootless mid-twenties look rough, but familiar to basically everybody who’s ever attempted to start carving out an adult life as an individual:  lonely, uncertain, and full of sub-optimal pieces that he just can’t shake, because they are a part of his identity and personal heritage. It’s also fraught with growing pains. All throughout, you can really feel this understated, persistent ache that is Clint’s sense of his own profound failure to ascend Maslow’s hierarchy of needs, but his confrontation with Katie roughly exposes that subtle thread. 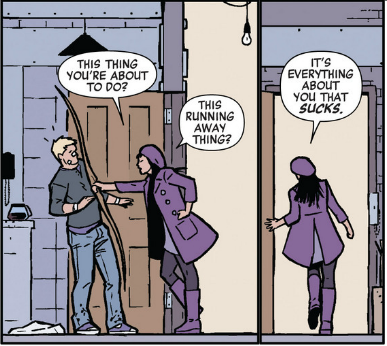 This one really knocked the wind out of me. Isn’t that what we’re all afraid of? That all our stumbles and misadventures are all part of one contiguous failure? At that, a moral failure, a failure of courage, a failure of honest introspection and self-love?

But all is well that ends well. Not only does our hero go on playing Robin Hood, he is heart-warmingly, earnestly, simply decent well doing it:

What do you say, Shelby?  He owns a laser disc collection, wears a Santa Hat while kicking bad guys’ asses, and makes popcorn for little kids but asks their mom first if it’s okay for them to eat it.  Is it fair to say that you and Clint will be announcing your engagement later this week?  What do you make of his mostly-horrible vacation and this glimpse into his quietly tortured attempts to set up his domicile?  Have we heard the last of the thugs terrorizing his building?  And were you as affected as I was by Kate’s brief but game-changing presence?

Shelby: No joke, if Clint Barton were a real person, I would marry him in a heartbeat. So, if Matt Fraction has based this character on someone he knows, I’m gonna need a name and number, because I think it’s love. I’m so impressed with how Fraction can cram so much deep character development into a story that, on the surface, is a light-hearted Christmas romp. Kate’s visit was big, but there were two lines of Clint’s that caught my eye. After the goons dump him back in front of his building, he berates himself with, “Done it now, Barton. Walking around like you’re some kind of person.” This man is a hero. He’s famous, he’s presumably got money, and most importantly he is a good person. People look up to him, people like him. These are all things to be admired, things people wish to have. And yet, “walking around like you’re some kind of person.” Nobody is perfect, but Clint doesn’t seem to realize that. He has this idea of how things are supposed to be, how the world is supposed to work, and if he doesn’t live up to that idea, then he’s a failure. This is reinforced by his conversation with Tony. Clint says he keeps all his busted-ass crap around because it’s his, and “you gotta make your own stuff work out.” This could just be me projecting my own in-my-late-20s-ness onto poor ol’ Clint, but I see this as him trying to live up to the idea he has in his head what being an adult means. That is why I love this character so much: he’s relateable. It’s the same with Gail Simone’s Batgirl; Fraction has developed a voice for Clint that is flawed in the ways we are flawed, and is also hilarious in a real person sort of way.

Speaking of hilarious, David Aja’s art has me chuckling out loud. 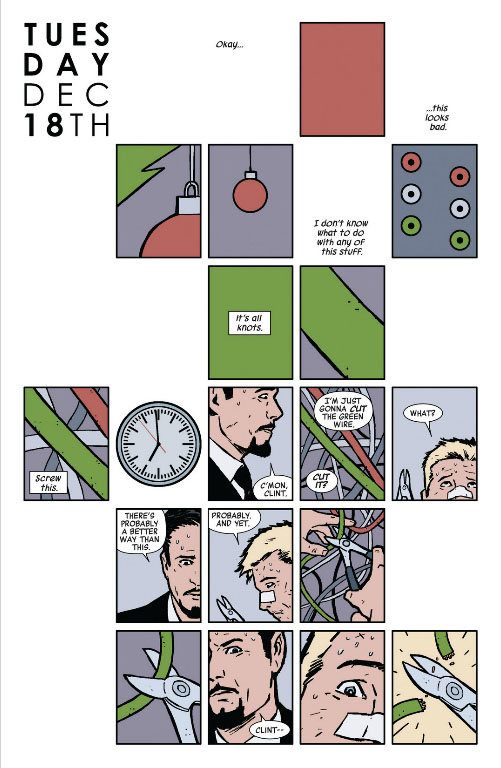 Come on, that’s hilarious. You’ve got the juxtaposition of the tree and bulb with the audio/video ports and wiring to provide the red and green on top of the purple background, setting the stage as “Christmas Time.” You’ve got the hilarious set up of Clint and Tony nervously assessing the tangled wires, and Clint’s impetuous idea to just cut one. I didn’t include it, but the next page then delivers the punchline, of Tony telling Clint he was stupid for doing that because they’re just tangled cords. Aja shares Fraction’s sense of comedic timing, and translates it into panels perfectly. It’s not my favorite, though. My favorite image is definitely the page of Clint taking a stand against the Tracksuit Mafia outside his building. 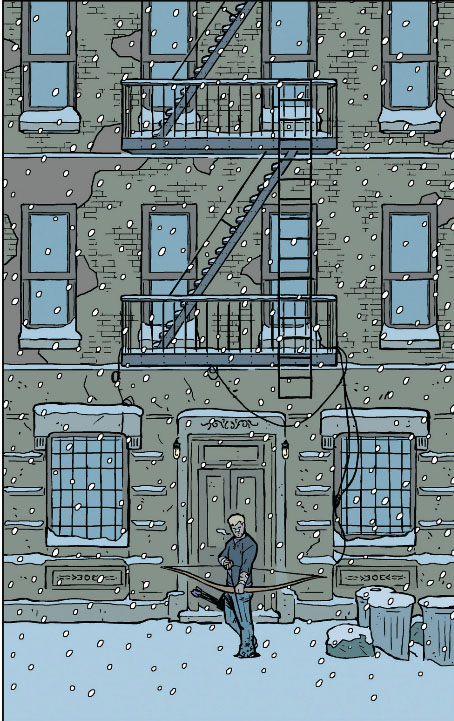 Put the Santa hat back on him, and I would send that image out as my Christmas card every year for the rest of my life.