We had our reservations about Before Watchmen, but Darwyn Cooke’s detailed look into the world’s first generation of costumed heroes more than earned its place on this list. Cooke’s charming art offers a compelling counterpoint to this increasingly grim tale, but it’s his nuanced character work that truly steals the show. The Minutemen were one of the least-explored areas of the Watchmen universe, and this series quickly found its footing exploring how their oversized personalities would grind against each other. Excelling far beyond its prequel trappings, Before Watchmen: Minutemen is one of the most effective, affecting character studies we read this year. 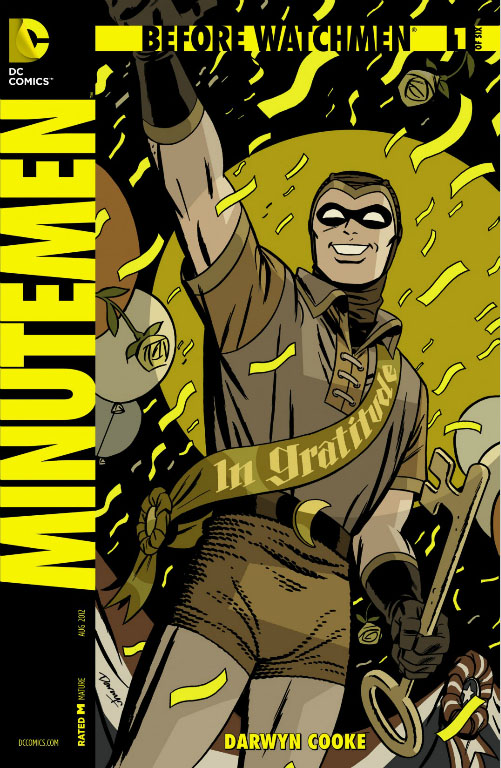 When Swamp Thing premiered in 2011, it curiously didn’t feature the titular Swamp Thing. As the series rounded the corner into 2012 (and issue 5), Alec Holland had yet to make his transformation. Scott Snyder and Yanick Paquette finally revealed their new design in issue 8 (a full four more months later), and patient fans were treated to an epic battle that has more or less been playing out ever since. It was a risky move, but one that was absolutely essential to creating the massive stakes that have defined this title. Comics often go for operatic high-notes, but this is the rare example where that sense of drama is actually earned. 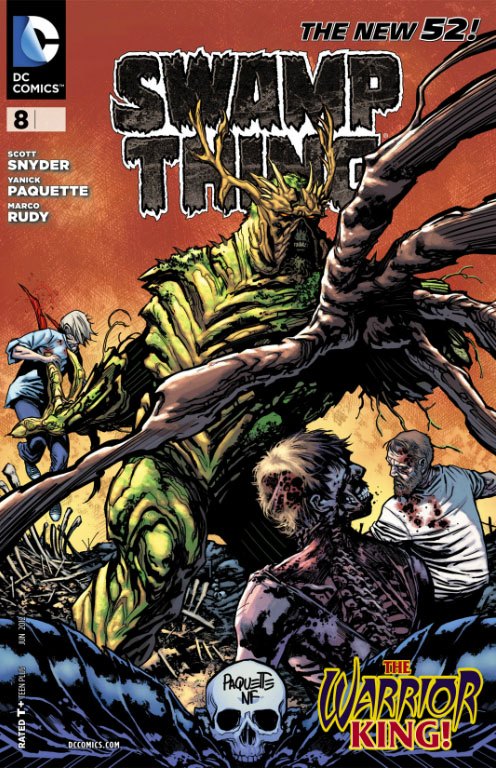 Gail Simone knows Batgirl. And she proves it every issue by writing the clearest, smartest, most honest caped crusader you could ask for. Simone’s instant credibility has given her opportunity to flesh out an expansive world around the titular heroine, not only delving into the rest of the Gordon clan, but also inventing dynamic new villains wholesale. Simone’s proven herself so adept at building a Rogues Gallery that she’s out-shone her Bat-peers in characterizing the baddies of the last two Gotham cross-over stories. Batgirl’s Talon is the only one of those characters to stick around after the Night of the Owls and it’s hard to imagine a more chilling Joker than seen in Batgirl’s Death of the Family issues. 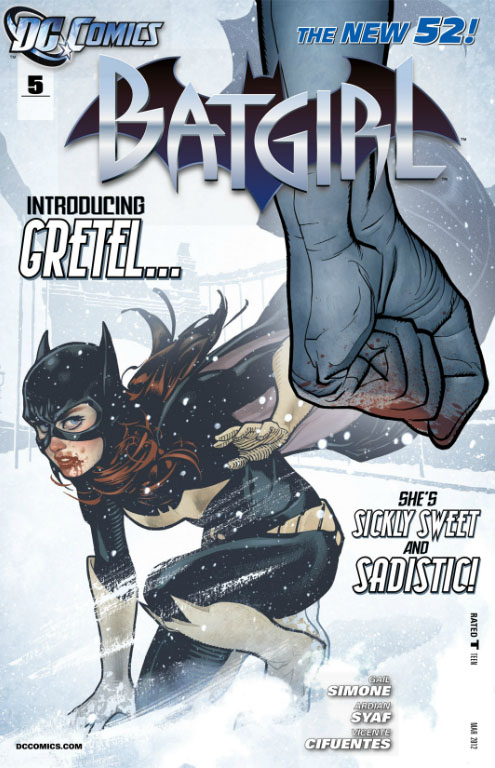 Kinetic fun. That’s what Francis Manapul and Brian Buccellato’s Flash series is about. Each newly re-introduced Rogue brought a fresh excuse for brightly-colored character to zip around the page. As much fun as it’s been, the real payoff has been in the way Manapul and Buccellato use their series to comment on the very comic they’re writing. From Barry’s muddled role in the DCU to editorial interference; from fan reactions to overly dense stories, there’s seemingly no meta-commentary The Flash can’t handle. Oh, plus he runs really fast or something. 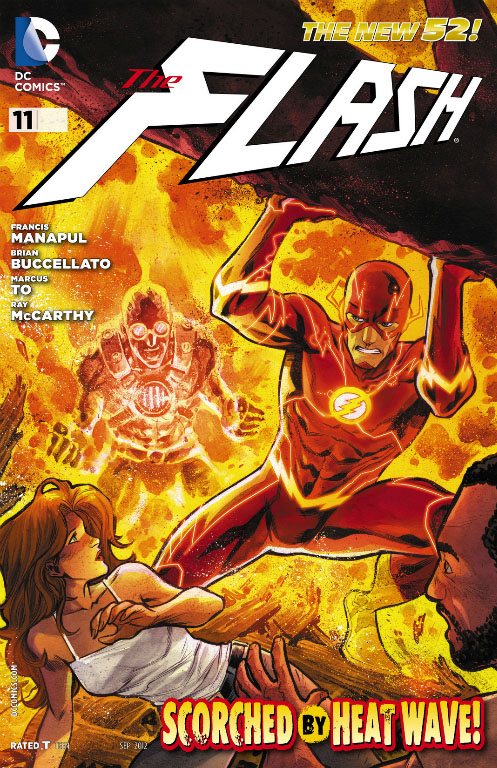 Jeff Lemire’s run on Animal Man began as an exploration of the simple concept: “what if a superhero had a family?” But it didn’t take long for that premise to spiral as definitions of both “family” and “hero” began to broaden. As a key player in the deathpocalypse event, Rotworld, Buddy Baker has had to team up with the strangest band of merry men in the DCU, solidifying Animal Man’s place in the modern pantheon of DC heroes. To boot, the aggressively grotesque art-style laid out by Travel Foreman set an absolutely disgusting standard that artist Steve Pugh is more than up to the challenge to replicate. It’s a measure of the quality of storytelling that the gore isn’t THE selling point of this series. Because gross. 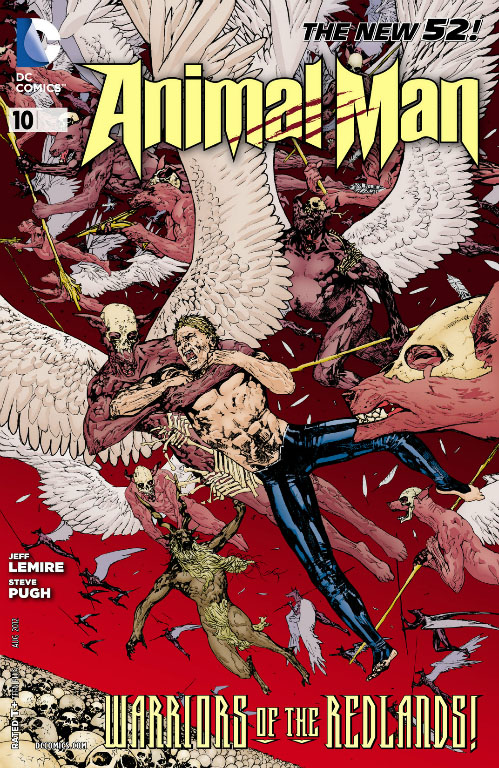 About two years ago, Matt Murdock — under the pen of Mark Waid — debuted a brand new attitude: cheerful, upbeat, but no less-ready to kick ass. It made for a charming first year of the series, but Waid’s been playing the long game, and it’s only now becoming totally clear what the ramifications are of Matt pretending to be something he’s not. Time and again, Daredevil isn’t able to trust his perception of reality, and that’s taken a toll on the bright outlook he’s been putting on. As the subject matter darkens, the action remains as crisp and exciting as ever with artist Chris Samnee choreographing clear, clever fight scenes. It’s become trite to claim that Daredevil is a can’t-miss series, but it’s true — and the crazy thing is: it might just be starting to hit its stride. 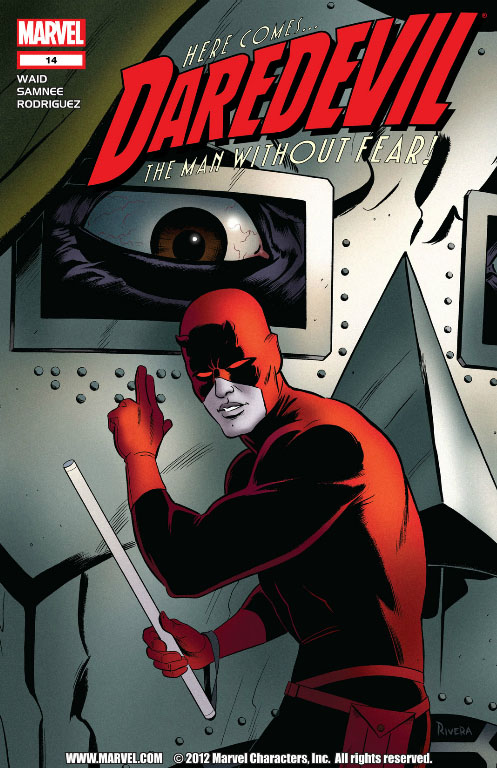 Batwoman has never been about plotting. Which is weird for a serial action comic. J.H. Williams III’s ethereal artwork suggested early on that the character’s adventures were about tone and style, but in the last two story arcs (focusing on fractured chronology and Batwoman’s adventures with Wonder Woman) have revealed impossibly deep characters at the heart of Kate Kane’s world. Issues 0 and 15 gave up any pretense of plotting and became quiet meditations on Kate and GCPD Detective Maggie Sawyer. But Williams and co-writer W. Haden Blackman investigate every corner of their supporting cast, until the reader knows — and loves — everyone. It’s a gorgeous series whose beauty turns out to be more than skin deep. 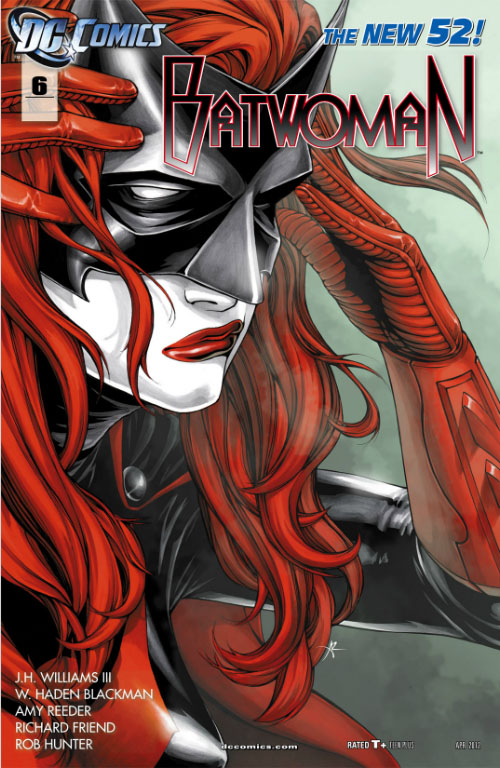 Like his work with the Minutemen, Darwyn Cooke has found surprising new facets to explore in Laurie Juspeczyk’s story, justifying the series’s existence while creating a series that would stand alone just fine. Following Laurie as she runs away from home and explores the counterculture of late 60’s San Francisco, Cooke plumbs the depths of teenage rebellion, turning in an incredibly moving essay on the relationship between children and their parents. It’s a surprising subject, but is absolutely fundamental to Laurie’s character, as her mother bears influence over her life in ways both known and unknown. These are heady themes, but Amanda Conner’s mesmerizing art sells every single line with her characteristic charm and invention. The “Before Watchmen” designation may have scared folks away on principle, but as one of the best series we read this year, we can’t recommend it enough. 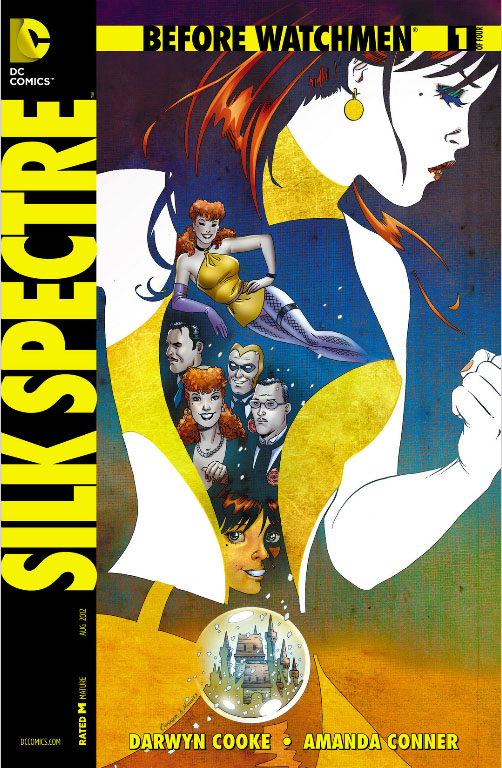 It’s a testament to the charm of Hawkeye that, with only six issues, it has become one of our favorite series of the year. Between the low-stakes premise, Clint’s “aww shucks” good-naturedness, and a razor-sharp sense of humor, Matt Fraction has delivered the antidote to Grim’n’Gritty. It’s an absolute revelation, wrapped in the jawdropping package of David Aja’s design-inspired art. The result is slick as hell, but never dips into detachment — there’s a real emotional core (grounded by Clint’s maybe-not-entirely platonic relationship with co-Hawkeye, Kate Bishop), which keeps the action from flying off the rails. It’s fun that only feels frivolous. 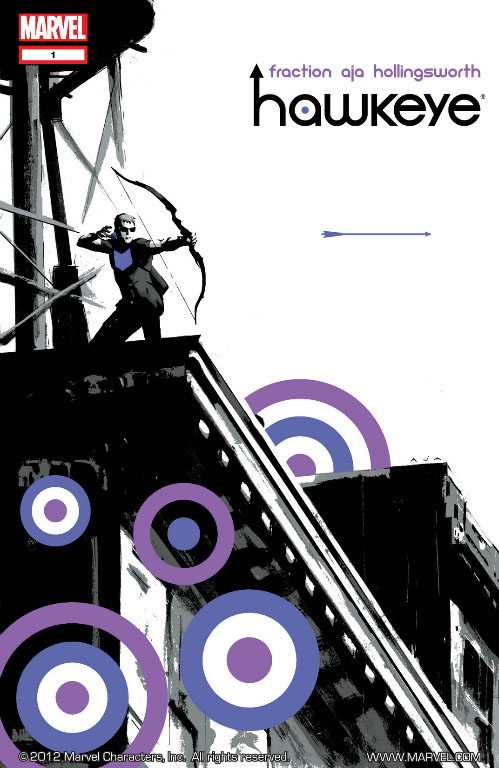 Batman started the year in a pit he didn’t think existed and ended it heading into Arkham to deal with a claim he doesn’t believe. Scott Snyder has found a great deal to mine in Bruce’s denial, which seems to stem from some of Batman’s most essential principles: fearlessness and logic. This focus on the most basic elements of Batman have given Snyder’s run a timelessness that matches its instant-classic status. Paired with Greg Capullo’s inventive and subtle art, this series has the uncanny habit of outdoing itself each issue, making it one of the most anticipated each month. Dark, smart, and thrilling from top-to-bottom, this title reminds us why we love Batman in the first place.

With decades of comics continuity, there’s a world of complexity for historically-minded writers to mine in new ways. In Wonder Woman, Brian Azzarello has found success mining an entirely different history — that of classical mythology. Beyond the mythological characters and settings, Azzarello — and his collaborators Cliff Chiang and Tony Akins — have also managed to update the symbolism of Greek myths, creating worlds brimming with meaning. As it enters the new year, the series has begun to weave in elements from Jack Kirby’s New Gods, suggesting a whole new world of possibility just on the horizon. That level of complexity would crush most comics, but Wonder Woman has demonstrated time and again that it’s capable of things few other titles are. 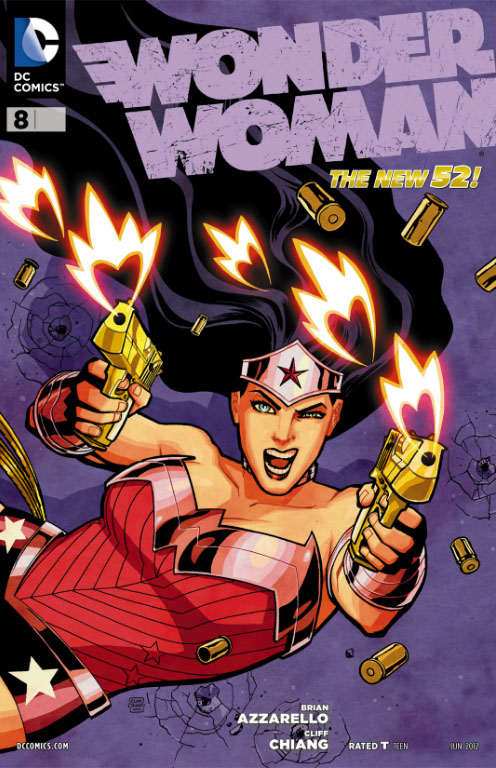 We’ve been reading Saga since the first issue, but it took us half a year to decide to start writing about it. The world is so complex, the characters so rich and the story so simple that it’s nearly impossible to have anything insightful to say about it. Brian K. Vaughan wields every cog in this magnificent machine with such grace — and with no airs of pretension or cleverness. When it comes time to process the text, we’re often blinded by the otherworldly art of Fiona Staples. Vaughan reportedly gives her all the freedom in the world to express the most idiosyncratic corners of his vivid imagination. The result is electric — simultaneously alien and mundane, but always honest. 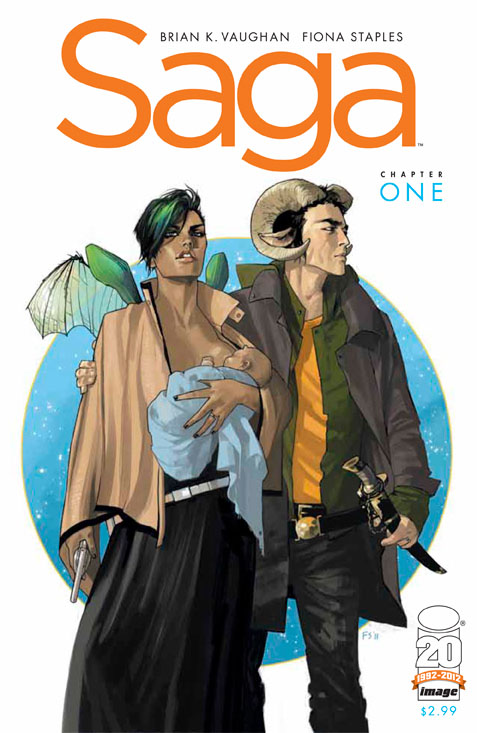