Shelby: Science and magic. In the broadest of terms, they are the two sources of meta-humans’ powers in the DCU. Superman? He’s an alien being powered up by the particular wavelength of light from our sun: that’s science. Wonder Woman? She’s a demi-god, pure and simple: that’s magic. Green Lantern? Trick question, it’s will-power harnessed and weaponized: I’m calling it magic refined by science. Lantern Corps aside, there’s usually a pretty clear line between science (far-fetched and ridiculous though it may be) and magic in the comic book universe. Often times the two sides face off, refusing to see that they are kind of two sides of the same coin, but every so often science and magic team up and we get something extra special. Luckily for us, Justice League Dark gives us both options in one action-packed issue.

It’s a big day, folks; for the first time in Zatanna’s history with JLD, her magic isn’t failing her at a critical moment in the fight. She and Tim have landed in some sort of forest, and are immediately confronted by giants calling for the Hunter. She dispatches them with ease, and is super pumped about all the wild magic in the air, when Officer Vikar shows up in some sort of mecha suit and basically tries to arrest them. Zee won’t have it, and Tim has to stop her from killing him. Vikar lands a shot, but before he can take them in, they are pulled underground by a group of fairies, trolls, pixies, gnomes, and a satyr, all praising the Hunter. Meanwhile, back at Nanda Parbat, Dr. Peril has jury-rigged the books to work again with a combo of some Dr. Myst magic and Timothy’s dad’s DNA, and sends Constantine, Frank, Black Orchid, Xanadu, and Deadman to…wherever. The place has weird affects on all of them: Xanadu becomes an ancient crone, Orchid transforms into a giant purple creature that looks like a Swamp Thing/Anton Arcane hybrid, and Constantine finds that, hilariously, he is no longer capable of lying. And then there’s Deadman. He triumphantly screams to the sky that he is actually alive, as tears stream down his face, and then he is immediately shot dead by Vikar, who’s come back with an upgrade.

Let’s start with that last bit; what exactly is this place doing to these people? Is it stripping them of what they consider to be their strongest suit? That would make it Orchid’s humanity, Zee’s restraint, Constantine’s ability to swindle, Xanadu’s…looks?, and Boston Brand’s deadness. We don’t know how Frankie’s been affected, nor do we know if these are the only effects on everyone, so we don’t have a lot to go on. Constantine’s problem is the funniest thing I’ve seen this side of Liar, Liar. 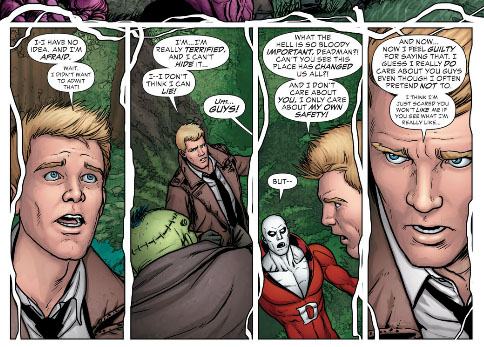 It’s actually kind of pathetically adorable; John acts like a dick so when people say, “Man, what a dick!” he can find comfort in the fact that it’s only because of this big act he’s putting on. If he were to be himself and people still though he was a dick, well, that’s a scary truth to face. Also, since most of his plans involve putting people in danger by lying to them to get what he wants, this is going to be a tough mission for him.

Poor Boston Brand, he seems to always be getting the short, dead end of the stick. I won’t lie to you, when he was immediately shot after proclaiming his joy at being alive, I thought it was a little funny. I DON’T FEEL GOOD ABOUT IT, OK? But, when it appeared that he was actually dead, I definitely felt more concerned than anything. We don’t know anything about how this place works, if Boston dies here, he might actually really stay dead. Is it possible that Jeff Lemire and Ray Fawkes just killed Deadman?

I’m excited for this new turn of events. As fun as last month’s haunted house romp was, I’m glad to get back into the swing of things. Lemire and Fawkes aren’t pulling their punches with this one, either; they immediately hit us with a world which is very clearly science vs. magic, where magic actually appears to be outlawed. It seems like Timothy has been destined to lead a magical coup against the science overlords of this place, and I am very eager to learn more about both the science and the magic we’re seeing here. Will Timothy be convinced to take up his magical mantle once again? He seemed pretty eager to just be a regular kid who never has to deal with these sorts of terrible things. More importanly, are we seeing some sort of Saga prequel with this science/magic conflict? I mean, we obviously aren’t, BUT WOULDN’T THAT BE AWESOME!?

Taylor:  Wow! This issue of JLD sure packed a punch and will definitely appease those who weren’t fans of the seemingly pedestrian events of last month’s issue. The pacing of issue 15 reminds me of some of the work we’ve seen in another magical title, Sword of Sorcery. The first couple of issues of that title are almost exclusively action and serve to set off the later events of the series quite well. While, like some, I was skeptical of the title given its apparent “teen princess” bent, I was sold on it after seeing the kinetic action of the first couple of adventures. Similarly, this issue of JLD is packed full of action that — while fast paced — never seems to be too confusing or out of control. This, in turn, has spun up the engines of this title once again and has set it on a new and intriguing direction. It is hard to imagine reading this issue and not immediately wanting more of what was just had. Like Sword of Sorcery, JLD has an excellent rhythm to both its individual issues and its story arches and it’s just stunning when it really hits that groove, as in this issue.

What’s further impressive about all of the action in this issue is that it is not devoid of content in any way. There are times when reading a comic book that you come to realize the action serves no purpose to the story, making you question why it is even there in the first place. While this in and of itself isn’t terrible (because action is almost always fun), the really good titles have a way of making that action matter. This happens in JLD 15 as we are introduced to a new world that is steeped both in magic and technology. For all the action that surrounds Vikar, the reader learns a great amount of his world from his dialogue and his interactions with his network of enforcers. What’s also neat to consider is that when reading this issue you never get the sense that Vikar is necessarily an evil figure. Generally when the titular heroes of a comic book are fighting someone, it’s pretty clear that who they are fighting is an antagonist in some sense. However, Vikar doesn’t have that aura about him (at least not yet) so his presence so far is serving as an introduction to the dimension we have just entered.

Speaking of which, it’s interesting to consider what exactly this place is anyway. Shelby, you mentioned that you think this world seems to be pitting magic and science against each other, a notion nowhere as pronounced as in this frame.

Here we have the magical and naturalistic Wood Nymphs juxtaposed with what is perhaps the science-laden suit of Vikar’s rebooting. It’s a marvelous panel and really brings home the ideas of science vs. magic and nature vs. technology all into a single frame, which is quite impressive. But for all that, I can’t say that I’m entirely sold on this being a universe where magic and science are strictly at odds with each other. Remember, the books of magic brought Tim and Zatanna here and at one time they were believed to be magic by the most knowledgeable magic makers on Earth. That has me second-guessing everything we see now in this title in terms of what is magic and what is science. Doesn’t it seem possible that Vikar’s suit is somehow controlled by or makes use of magic? Also, the enforcers here certainly seem to know what magic is and they have their own name for it. This doesn’t necessarily make them users of magic or technology exclusively, at least not yet. Perhaps it is some sort of hybrid?

I’ve really come to appreciate the style that Mikel Janin has employed in this series so far. It is detailed, but not overly so, which makes the renderings of some of the more fantastic elements of this title work extremely well. Additionally, the colors of Jeromy Cox really help to make the magic in this issue seem, well, magical. The final shot of Vikar in his beefed up suit is a good example of the overall quality of the art in this issue.

And there’s Deadman laying dead at the bottom. Shelby, I also laughed when he died, but unlike you I don’t think we need to worry too much about Boston Brand. This title has always had a good sense of humor and I think it’s pretty safe to assume that’s what’s going on here. Also, the killing of Deadman would really pull the rug out from under our feet and I don’t that would happen without him first either doing something heroic or being a wise ass. In either case, I’m sure we’ll see him again soon.