Drew: Size can dictate a lot about a narrative, to the type of tone it can sustain to the very form it’s hung on. We currently seem to be in an era fetishizing ever longer dramatic narratives, hailing television shows with season-long arcs (or longer), and pouring out in droves to see stories broken into multiple epic-length films (coughTheHobbitcough). At the same time, Adult Swim has found success with very short-form comedies, and youtube clips of cats saying “no” have racked up millions of hits. It seems we’ve decided that very short stories are better at supporting comedy, while very long ones are better for drama. A + X, as a kind of clearing house for extremely short-form stories, has largely borne-out this notion, mining a series of absurd scenarios for their comedic potential. A + X 3 carries on this trend in its latter half, but opens with on much more serious (but still fun) note.

Drew: In the opening story, we find Black Panther experiencing some odd weather-related events, which he suspects may be the work of Storm, his ex-wife. This is all well and good when it’s helping him catch criminals, or allowing schoolchildren to go on their field trip, but when a parade of visiting princesses are rained on, he realizes Storm’s interference may not always be a happy thing. He rides out to meet her, and the two discuss their relationship (while taking down a few poachers). They realize they still care about each other, but can’t really make their relationship work.

It’s a surprisingly mature moment, but one that is also strangely specific. Seeing a couple end amicably is a lovely sentiment, but I’m just not sure the format of this title was really the place for it. One of the things that I’ve really loved about this title is the low cost of entry — we don’t need to understand Wolverine and Hulk’s history, we just need to know that they both want that cake — so the very notion of a cathartic character moment seems at cross purposes. I know essentially nothing about these characters, so when they talk about how much they used to fight, or obliquely refer to Namor’s attack on Warkanda, I’m left blinking dimly.

Ultimately, I’m not sure how vital that information is to understanding what’s going on here, but this is a very short timescale to get invested in their relationship. I can imagine the catharsis of seeing these two characters make peace and enjoy each other’s company again, but since I’ve literally only ever seen them making peace and enjoying each other’s company, it doesn’t exactly feel like progress.

Still, it’s a very sweet story, and one that is told with a striking visual style. Pasqual Ferry’s subtle expressions really sell that final exchange, but it’s Brian Reber’s striking colors that really steal the show. 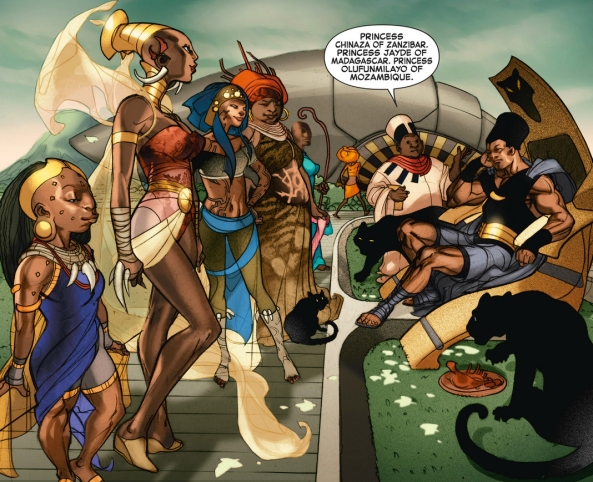 I first became familiar with Reber when he was the colorist for Batwing, and I remember finding his work to be beautifully evocative of the African plains. That magic works again here, though I can’t help but chuckle at the very specific pigeonhole I now place Reber in.

This wasn’t the most fun I’ve had with this series, but it certainly wasn’t as dumb as that Black Widow + Rogue story from issue 2. I don’t know, Shelby, did you feel any more emotionally invested in this story than I did?

Shelby: You’re right Drew, this is a very sweet story. I don’t know anything about Black Panther and Storm’s relationship, or even anything about Black Panther, but I’ve always liked Storm, so I like spending some quality time with her. While we we may not know the specifics of their situation, there’s enough exposition given for us to understand why their relationship didn’t work. And it may be a  fairly mature moment between these two, but I think the tone of the story is playful enough to work for this title. It’s just so charming to see these two people having this serious conversation about the status of their relationship while kicking wholesale ass; I love the inclusion of super-heroics in a chat that’s not all that unusual. 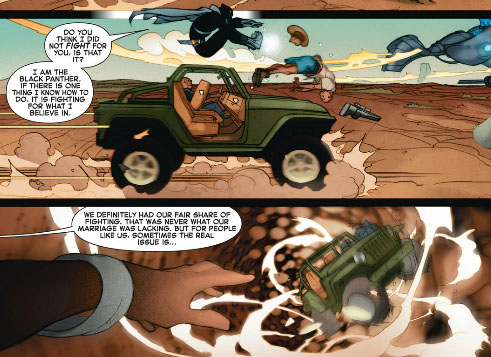 I know this story wasn’t nearly as smash-em-up-fun as we’ve seen in other stories, but I just kind of liked it. Storm dousing the other princesses was cute, and her apologizing for it was just as cute. Honestly, it was just nice to see them work things out. It’s a cute little story with a nice, happy ending. I’d be bored reading it every month; hell, I’d probably be bored reading a full issue of it. For that, I think A+X is a good place for it.

Shelby: Romance is in the air as Gambit takes in an open-air performance of The Tempest of all things, when suddenly the leading lady is snatched from the stage by… something. 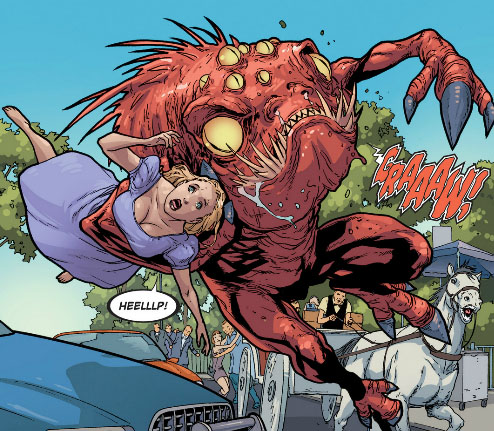 The chick is hot, so Gambit leaps into action and gets a surprising assist from Hawkeye. Hawkeye also notices the girl’s hotness, and the two trash-talk each other while trying to take down Big Red. Neither are really doing the trick on their own, and finally Gambit takes the thing out with a stolen incendiary arrow. The actress gives Hawkeye her number (it was his arrow, after all), Gambit steals his wallet with the  number in it, the end.

I get what this story is supposed to be. We’ve got a couple of knights competing to save the damsel from the dragon and then give her “the night of her life,” as Clint so elegantly puts it. And I tried really hard to see a couple of guys who don’t like each other but begrudgingly respect each other playfully duke it out and save Princess Peach from Bowser before he whisks her off to another castle, I really did. In the end, though, all this story was to me was a couple bros trying to out-bro one another to impress the girl, and that is just not something I’m interested in. I’m not looking to turn this into an “omgSEXIST” rant, because I don’t think that’s the aim of the story. It’s way too dumb to be something like that. I guess it’s kind of funny that while Gambit and Clint were busy peacocking, the actress was looking for a little %^#$# help. And Gambit and Clint do make for a pretty funny team-up, especially when neither of them have the moves to back up their words without a little help from the other. Mostly, though, this just played out like a superhero version of the dudes I see macking on girls in Wrigleyville every weekend. You know what would have been comedy gold? If , when the monster was vanquished, the lady tried to give her number to the champion, and instead the two dudes decide to have a beer and start a bromance of their own. What do you think, Drew? Am I looking too much into this story, or am I maybe just really, really, really outside the realm of the intended audience for this?

Drew: You know, I don’t think you’re being too hard here. I was really enjoying this story until the last page mucked things up. Clint and Gambit’s “mine’s bigger than your’s” game could have been dumb but charming if the irate, objectified actress had chewed them out for their egotistical behavior — a little moral can go a long way — but instead, their totally reprehensible behavior is rewarded with attention from the very woman they were barely able to pay attention to moments ago.

Actually, the more I think about it, the more mad I am about this. The girl is treated as a total maguffin, which is inherently objectifying, but would be excusable in a little bon-mot such as this (she could have just as easily been a kid or a sack full of money, but the point was really to give these characters a reason to chase this monster). The issue is that James Asmus draws our attention to how little the characters care about the girl in having them distracted with their one-upmanship. Again, this wouldn’t necessarily be a problem in a short, frivolous story such as this, but its suggested that the only reason the heroes are helping is because the girl is attractive (replace the girl with the sack of money maguffin, and their personal interest rightly comes off as totally reprehensible), making them total skeezballs. I could accept that as maybe just who these characters are — I have relatively little familiarity with them, and I’m told Clint hasn’t always been such a great guy — a reading which explains their borderline discussion about the “hot actress.” But (and this is a BIG but) this doesn’t explain why the girl goes from being totally ignored to totally grateful. It’s probably because she isn’t very smart (what with the blond hair and the breasts and the uterus and all).

The fact that their totally shitty behavior pays off in attention from this girl belies a pretty low opinion of women. After realizing this, I couldn’t help but view this passage in a biblical light. 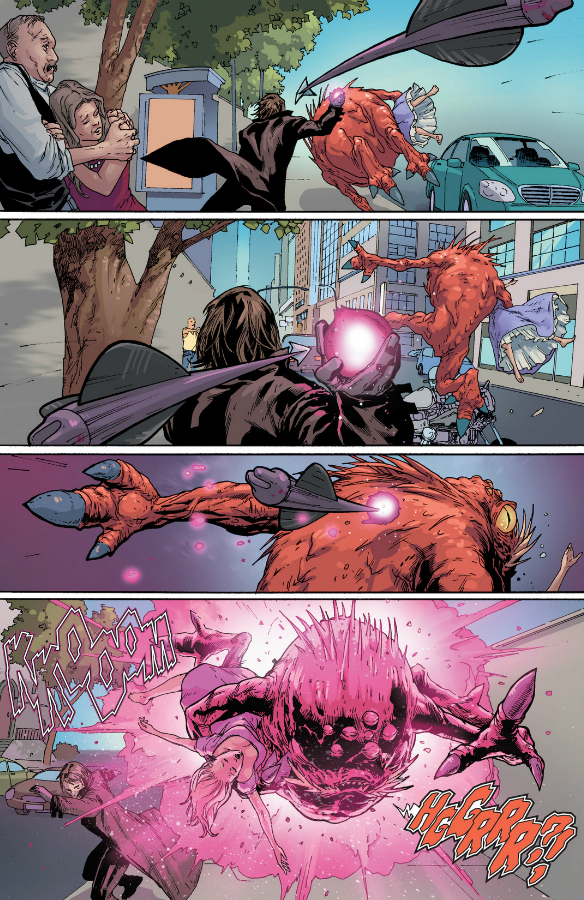 This might be a stretch, but the girl is Eve, the monster is the serpent, and the fruit is the apple (which I’ve actually seen interpreted as a pomegranate, but I’ll accept “Indian apple,” as a reasonable alternative). That makes this sequence kind of a reverse-original-sin story, where Adam (here represented by both Hawkeye and Gambit [cause bros stick together when fighting the forces of evil and women, amirite?]) rejects the forbidden fruit, sending Eve and the devil packing. This manages to turn the story of Adam and Eve into even more of a misogynist fantasy, which, you’ve got to hand it to Asmus, is kind of a feat.

That’s not my most compelling unlikely reading, so I’m sure I’ll hear about how strained it is in the comments, but it only occurred to me after I had already realized how poorly women are portrayed in this story. That I then found more stuff to complain about might just be a coincidence, but I blame this story for starting it. At any rate, this story only makes me madder the more I think about it, so I’ll quit before I start with any of my really crazy theories.