Today, Patrick and Drew are discussing Superboy 16, originally released January 16th, 2013. This issue is part of the H’el on Earth crossover event. Click here for complete H’el on Earth coverage.

Patrick: Drew had to fight pretty hard to find some meaning in last month’s issue of Superboy. I’m not saying his assertions are wrong, but they certainly meet Tom DeFalco more than half-way. Shelby was not so kind. This issue, by comparison, brings some strong characterization of Superboy, non-stop action and an interesting theme (with clever call-backs). This issue isn’t going to start any Superboy-revolution, but it is a tonally consistent, exciting story. Maybe I’m setting the Superbar pretty low at this point…

It’s time for an attack on the Fortress of Solitude! Which means Superboy is joined by the Justice League for a full-frontal assault. Once inside, Superman and Cyborg fight a bunch of alien weapons from Superman’s old collection. Y’know, shit he had stashed away because… well, that doesn’t really matter. One such weapon zaps Superman into an alternate dimension. While everyone else kinda shrugs and asks “what now?” Superboy throws himself headlong into the path of that same weapon, theoretically propelling himself into the same alternate dimension to SAVE SUPERMAN.

It’s interesting to see the kinds of connections Superboy makes between the Justice League and the Teen Titans. By extension, we also see how Superboy views himself compared to Superman. First, let’s just talk about the Justice League. One of our favorite on-going conversations on this site is how we don’t like to see the Justice League always stymied in internal conflict. There’s very little drama in seeing a team fail to work together over and over again. Yet, that’s the dynamic that Geoff Johns is so keen on cultivating. Here, we see the odd example of the team working well together. Not just knowingly using each others’ strengths, but also being in touch with the psychology of their teammates. Flash knows what Batman is going to suggest before he does, Batman knows to let Wonder Woman stay back and fend off the robots. It’s refreshing. And it clearly lays the groundwork for a team that Superboy can admire.

Actually, it’s funny — and sorta cute — to see Superboy reverse engineer a concept of who Batman is as “the man who trained Red Robin.” Adorable! Also, check out the way Barry’s speech balloons are drawn exactly like Bart’s would be drawn in Teen Titans:

Only instead of doing something jokey and dangerous like Kid Flash would, Barry vibrates his molecules at impossibly varying frequencies in order to penetrate the force-field. For the first time ever, Superboy’s got some positive role models.

Which leads to a strong, character-based decision on Kon’s part: going after Superman even though he doesn’t know the consequences of being zapped into another dimension. He states both at the beginning and the end of the issue that he’s tired of being a weapon for other people to use, but instead of just complaining about it, dude shows some agency and becomes his own weapon. It’s a beautiful idea that I simply would not have expected from this title.

It also seems like DeFalco is a little bit more aware of Superman’s arrogance than Lobdell is. Cyborg openly calls Supes out on keeping all these dangerous artifacts at his stupid fortress and not under League lock and key. I guess we’ve seen examples of Superman being kind of a dick previously, but I believe this is the first time someone’s had the nerve to tell him he’s wrong. Again: refreshing.

We’ve got a new art team here with Amilcar Pinna and Iban Coello handling the penciling and Pinna and Rob Lean inking. They’re evidently still working off layouts and poses by Ron Frenz, but everything has taken on a much cartoonier look. Usually, this plays to the issue’s benefit, like lending a little levity to assembling the Justice League.

All the characters have this dark outline, like they’re decals posted on this background. I’m a big fan of simple, so this tickles me in just the right way. It’s not always perfect — details like heads missing faces or an occasionally-elongated neck on Wonder Woman feel sorta wonky, as do some of the facial expressions. But mostly, there’s bright, colorful action that I’m excited to read.

Drew, how’d you feel about this one? Did you find as much to sink your teeth into as I did? How about that weird-looking thing at the end of the issue — is that The Oracle? Or just some kind of servant of The Oracle? And either way, what does that have to do with anything? What’s more: why are these Himalayan researchers basically just A.I.M. goons from the Marvel Universe? 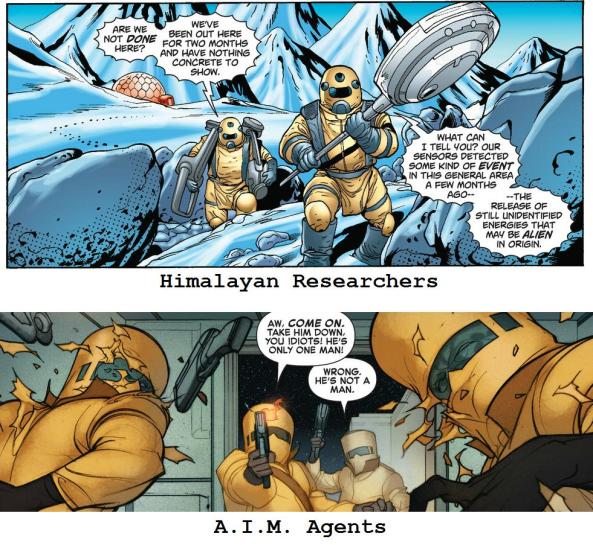 Drew: I’ll start with that monster thing at the end of the issue. I believe that is, in fact, the Oracle, the world ender we saw summoned by this fellow back in Superman 0: 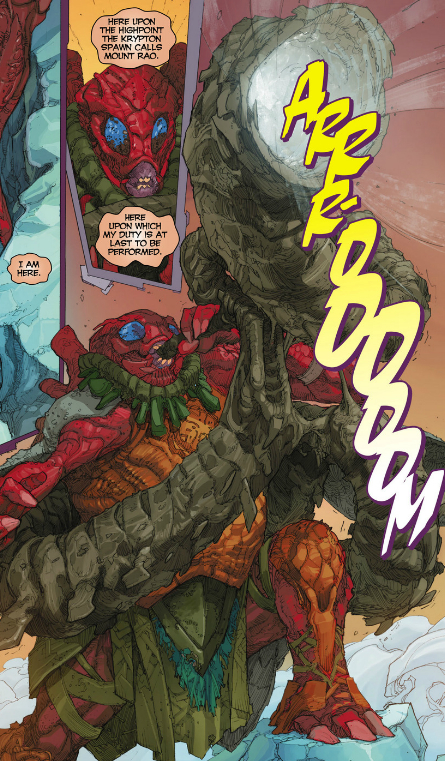 That was, coincidentally, just before Krypton ended, so you know this guy means business. It’s not clear to me whether the Oracle actually causes the death of these planets, or if he just kind of needs to be present for them, but it’s clear his arrival on Earth is not a good sign.

I have to say, Patrick, I wasn’t as happy with this issue as you were. I agree that Superboy’s demonstration of agency here carries on those themes I liked so much last month, but I think that through-line is largely buried by the presence of the Justice League. It’s a weird complaint, because I also enjoyed the Justice League action — the Flash stuff was clever, and it was downright refreshing to see Diana characterized in a Justice League story. This issue just felt overstuffed, to the detriment of the story I actually care about — the one that ultimately had to earn Superboy’s final act (and maybe didn’t quite make it).

Though, now that I think about it, the first stuff to go should have been the three pages we spent with Kara and H’el, which essentially rehashed every scene they’d ever had together. It’s redundant, but also focuses on the weakest parts of H’el’s characterization: his acting evil for absolutely no reason. He’s needlessly manipulating Kara’s emotions to convince her to do something she also wants to do, and doing it with such mustache-twirling obviousness that it reflects poorly on Kara that she doesn’t notice. Moreover, seeing him busy himself with petty bullshit completely undermines the impression of hyper-competence the rest of the issue works so hard to create. He would be much more imposing if we never saw him this issue — especially since none of the action actually involves him personally. I’d much rather be surprised by his plans later on than understand exactly how his spaceship got from point A to point B.

Actually, this scene doesn’t explain how H’el’s ship got here. H’el implies that Superman brought it here, but does that make any sense? When would he have done this? When did he discover the ship? Why didn’t he ever look for it’s obviously alien owner? Also, way to squander a splash page on an inanimate object. This feels very distinctly like DeFalco needed to pad out the space between the action sequences.

Actually, the whole break from the action felt pretty forced, arbitrarily leaving the action to jump back one hour to the planning  of the attack. I generally prefer weird chronology to have some thematic or narrative significance, but failing that, it should at least enhance the pacing of the story. This sequence seems shoehorned in just so we would have a fight scene at the beginning, storytelling be damned. I get that that’s the basic structure for most comics, but the “one big fight scene” nature of this issue poses a pretty compelling reason to try a different approach. These down scenes hit the breaks right when we need the accelerator, mangling what could have been a top-to-bottom thrilling issue.

All in all, there was more to like in this issue than dislike. Patrick mentioned that he may be setting the Superbar low, but given that my two most recent experiences with this title range from generally disgusted to generally impressed, I’m having difficulty calibrating my expectations. This certainly felt more like issue 15 than it did like issue 14, but it also suffered from some of the overcrowding that made 14 such a slog. Oh, but who am I kidding? I can’t stay mad at any comic that puts Batman in a fur-lined cape.

That’s adorable and you know it.