Today, Michael and Patrick are discussing Batman and Robin 16, originally released January 16th, 2013. This issue is part of the Death of the Family crossover event. Click here for complete DotF coverage.

Michael: A series is generally more gratifying when it subverts expectations without betraying our understanding of the characters. In a New 52 series like Batman and Robin, this balance is difficult to achieve; readers demand a basic level of fidelity to beloved genre tropes and character traits, but expect narratives that stand up to the scrutiny of a savvy, cliche-fatigued audience. This issue doesn’t drop any groundbreaking twists, but it works deftly within a familiar framework

After trapping Robin in a worm-infested lair, the Joker pits him in a classic fight to the death against a newly brainwashed Batman. As Robin begins a long campaign of pleading to Batman’s subconscious, the Joker relaxes for the familiar show. 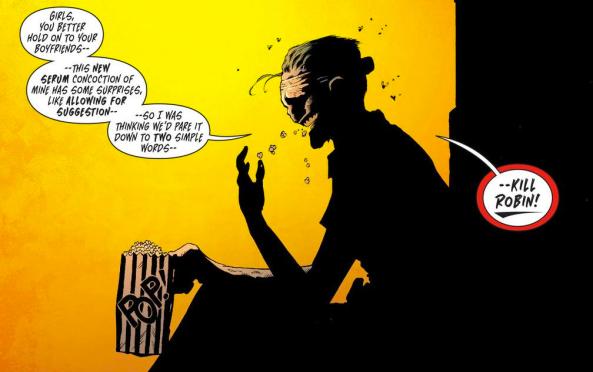 Batman and Robin exchange blows, the former slowed by the serum, the latter by toxins. Robin gets Batman in a headlock, he implores his father to fight the mind-control and recites platitudes to remind him of his code. When this fails, Robin manages to open a trap door to get away, but Batman forces the confrontation; he follows him into a spooky zoo-scape, tackles him into a “polar bear tank” for a quick underwater fight, then throws him back out onto the ledge. 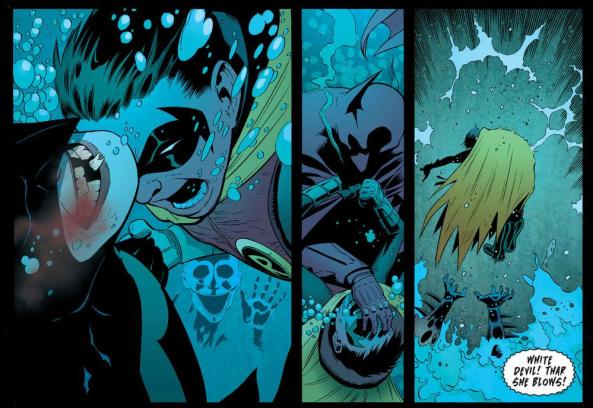 The joker cheers. The fight grows intense. Robin, frustrated and hurt by Batman’s inability to fight through the Joker’s control, unleashes unrestrained fury. The first panel shows a striking image of Batman losing control. He’s laughing, but he frowns (grotesquely) for the first time. Unfortunately, the page ends with a swarm of Robin’s fists coming down on Batman. The art is clearly meant to convey speed and dominance, but it ends up making Robin looking weak, his punches like a barrage of fuzzy mittens.

Unable to keep brutalizing his father and mentor, Robin offers himself to the madness, giving Batman an opening to strike him down and end it. That’s when the Joker detonates a heart-bomb, killing Batman. The Joker explains that the desired outcome was Robin killing his hero, not self-sacrifice, so he had to intervene. Robin stabs the Joker in the foot with a screwdriver, but it’s too late – the toxins are already overcoming him. The blood mustache is a really nice touch.  Robin follows the Joker into his own subconscious, perhaps being primed for a brainwashing of his own.

Patrick, I’d be interested to know about how this issue met your initial expectations. For my part, I was anticipating some sort of last-ditch effort on Robin’s part that yielded some sort of tactical victory – maybe finally tapping into Batman’s humanity with some sensitive subject. That Robin lost everything but a small moral victory was a dark surprise. In other words, I’m glad the story is giving the Joker a lot of rope to drag us down to a very dark place, before allowing his plans to unravel.

Patrick: Oh, it’s not brainwashing Damian has in store for him – he just has to bear witness to whatever’s on that horrible, gory platter. That’s three for three issue-16s that have gone out on that haunting-ass image, and I suspect we’ll clock a few more with the release of Nightwing, Teen Titans, and Red Hood this week. Individually, each tease is unsettling, but with each consecutive iteration of that image of Joker in his Sunday-best the nightmare becomes a little more surreal, and a little harder to escape. I absolutely love the persistent detail of his little jester tie-pin:

Over all, I’m not that moved by Joker’s play against Damian. This might be a moment where I’ve done this series a disservice by having read the rest of the cross-over. For example: even if I’m not using my common sense, I knew for a fact that this Joker-ized Batman wasn’t the real Batman. So the whole “will Robin kill Batman when forced to” thing lacks any kind of sincerity. What’s more is that it’s just not that compelling to have Damian defend himself. Naturally, the kid defends himself. Duh. Add to that that Damian is a killer — that’s a clearly stated component of who this character is. Wouldn’t it be more interesting to watch Damian chose to kill his father (or sacrifice himself) for some greater good? As it stands, Damian just gives up to stop the fighting. “Quitting” isn’t a tactic that he would have learned at either Bat or Assassin school. But it sure is a convenient plot-point!

Actually this is a lot like the end of issue 14, when Damian gives Bruce his mother’s pearls. The emotion that fuels the moment feels like it should be a real, almost naked, motivator, but it’s totally unearned. I’m not a huge stickler for logic in these scenarios — if a story beat feels good, but the reason-panels don’t exactly line up, I say go for it. But in both of these cases, you can almost see where writer Peter Tomasi started at the emotional pay-off and clumsily worked backwards to sorta-kinda justify it.

So, okay, let’s say Damian’s choice doesn’t matter. What are we left with? It’s a “Robin Fights A Joker-y Batman” story. And as far as gruesome slug-fests go, this one’s alright. Michael walked us through the cleverly staged fight sequence, so I won’t retread it. BUT, I did want to point out how creepy Joker looks peering through the glass in that second image he posted.

Actually, let’s sing the praises of disgusting disgusting Patrick Gleason. Gleason manages to find poses for Joker in his floppy meat-mask that imbue him with extra menace. And I didn’t think that was possible, but check out some of these choice Joker poses.

I can’t place that first image exactly — the wide open mouth and the wild tongue make him look like some kind of deranged dinosaur. Or, actually, I feel like I’m seeing a Guillermo del Toro character in that first panel (there might be eyes in his hands, you don’t know). In the second panel, he’s doing this classic Emperor-giving-thumbs-down, effectively sentencing his gladiator, the faux-Batman, to death. And that last panel is pure goofy Joker. Even when he’s pitting father-and-son in a fight to the death, Joker’s not going to waste an opportunity to comically wave his fists around. Gleason’s getting a little too good at emoting with this monster.

A lot of the backgrounds in this issue are fairly abstract. That’s sort of a shame, as Tomasi’s obviously gone through such specific pains to set this brawl at the zoo. The lack of background details kind of whitewashes the whole encounter. At the very least, the minimal backgrounds fail to inform us about the space these characters are occupying. Shelby said a few weeks ago how unsatisfying it is have an impossibly sized space for Joker to do his dirty work in. If he highjacks a roller rink or a church or an asylum (just, any ol’ asylum will do), then there’s reality behind the space. I get “zoo,” but I have a harder time following “chamber under the giant egg / millipede cage.” What’s the purpose of that room — other than to trap Robins, of course? Even once they’re in the polar bear habitat, the backgrounds just get darker and less informative. Come on — nice white jagged ice structures would make for a perfect place for blood to spatter dramatically.

Here’s an example of a detail that works:

In a rather grizzly application of Batarangs, the fake-Batman turns these blades into a set of Wolverine-y claws. It’s a simple way to take a familiar Batman tool and turn it into a terrifying weapon — and an appropriately gory weapon, at that. In a nice moment where Damian reclaims a little bit of that Batman identity, he hucks one of these ‘rangs at the Joker, returning the weapon to its original purpose. It’s a subtle way to fight the Joker, but it’s also the only time something like that occurs in the issue. So make of that what you will — either a happy accident or interesting thematic material squandered.