Drew: The notion that myths gain their power from our belief in them has been a primary focus of Batwoman in the New 52. It’s a theme that has come up explicitly in the text — as Maro conjures the myths that haunt our dreams, and as Kate seeks out the myths that inspire us to greatness — as well as implicitly in our analyses. Indeed, we’ve made the case that comics are modern mythology so often, I’d forgotten what “myth” might mean besides “story.” It’s parsing that very detail that makes Batwoman 16 such a pleasure to read, as J.H. Williams III and W. Haden Blackman remind us of the pleasures of form afforded to modern storytelling.

Part of what makes this issue so distinctly modern is its shifting perspective, recalling very strongly this series’ own “To Drown the World” arc. However, where that arc often felt choppy, the technique here adds an intense kineticism to a chaotic disaster scene. The issue opens with Kate and Diana arriving in Gotham, just as Croc has turned into Hydra (which Diana reminds us is THE Hydra), and as Maro has led the kidnapped children to the harbor to enact whatever plan she’s had all along. Splitting their efforts, Diana deals with the Hydra while Kate heads for the harbor for the kids. When Kate arrives (with Abbot and his were-men in tow), she’s able to convince Maria (the weeping woman) to turn on Maro, but it’s too late, the Mother of All Monsters has been summoned.

As usual, this issue is absolutely gorgeous. Williams has always been incredibly inventive with his layouts, but the varied perspectives of this issue gives him an excuse to really cut loose. Take this spread, featuring the triumphant return of Flamebird:

What better way to represent Bette’s insecurity in her role than by setting her small within a physical manifestation of the front she’s putting on? This is actually the last we see of her in this issue, leaving the fate of a myth unbelieved-in unresolved.

Nestled within these clearly subjective layouts is a very classical myth, compressed in time, distinctly set apart from the reality of now, and told by someone who was not present for (most of) the events of the story. This myth details the life of Ceto, the Mother of All Monsters. I was long under the impression that this title belonged to Medusa, but learning that there is an EVEN BIGGER BAD makes the prospect of taking her down even more daunting. You can take down Medusa with a shiny shield and a sharp sword (and Diana has those), but I have no idea how you stop Ceto.

Bette and Ceto aren’t the only ones experiencing identity crises here. Kate, normally so secure in who she is, is shaken to the core when she sees her own home under attack.

Kate forgets her mission — forgets herself — because these belongings are so important to her. These are the legacies left to her by her parents and dead sister, perhaps all she has to remember them by. She’s understandably devastated, but is set right back on course by Diana’s reminder that they’re here to stop this from happening to anyone else — the same message that eventually convinces Maria to stop Maro from taking anyone else’s children.

With all of these stories spinning simultaneously, could Williams and Blackman have chosen a more appropriate monster than the Hydra? Their stories so often take the figurative form of a many-headed beast, it was invigorating to see one in the flesh. It helps that Williams tackles the monster with characteristic bravado. 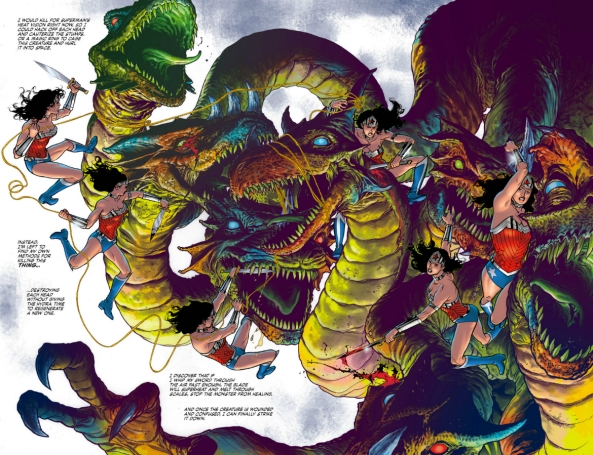 This certainly isn’t the first time I’ve seen this particular effect, but it is hands down the best. I generally try to avoid including pictures just to drool at them (otherwise, write-ups for titles like this one would just be pictures), but I don’t think there’s anything I can really say to express how cool this is.

And on that most eloquent of notes, I’ll turn things over to you, Jack. An issue this dense (and one I failed to adequately mention even half of) doesn’t really require any kind of prompt, so I won’t tie you down with any specifics. Just be sure to include some pictures (but not, you know, all the pictures).

Jack: I d’know, Drew, POST ALL THE IMAGES might be the only appropriate response here, because there is a real epic grandiosity to the images in this issue. How could there not be? The time for exposition and development has passed. We have watched events unfold slowly and elegantly for the last fifteen issues. At this point, we know perfectly well who and what we’re dealing with. Now it is for us to step back and, like Michael Caine’s sociopath, watch the world burn, which it does spectacularly.

Okay, I exaggerate:  it’s not just a chaos and destruction party. There are a couple of other interesting things going on here. We got a kind of schizophrenic digression to explain the origins of Ceto, the mother of all monsters.  I say “schizophrenic” in part because the series continues its on-again-off-again tradition of jumping rapidly between perspectives (neat but sometimes confusing), and altering the style of the art and the texture to match that perspective (delightful). This is Medusa’s moment, and although I don’t really think we’re well positioned to care what Medusa thinks, it is interesting to get a visual of HOW she thinks. We’ve seen it before, but it’s still a chilling synesthetic expression of what kind of monster she is: a toxic green on a field of toxic yellow against an eerie backdrop of pastels, ghost-like figures, and, uh, cutting people. 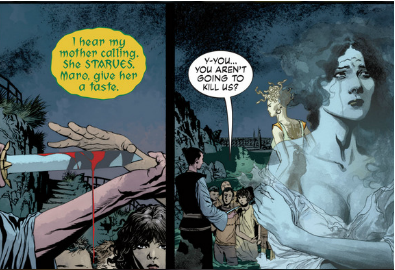 But the shocking part is when we see her mother’s origins through Medusa’s own love-glasses, and the tone becomes completely different:  beautiful, innocent, and almost (can I use this word?) cartoonish, which is the stuff of dreams and myth.

Something else I didn’t see coming: a flash of insight into Chase’s perspective and motivations. Up until this moment, we’ve mostly just experienced her as a pain in Kate’s ass.  She has made an enemy of vigilantism, and it’s not hard to understand why. Even in this semi-apocalyptic moment, her text appears breath-takingly level-headed and mundane. She has refused to succumb, at any point, to the sense of martyrdom and drama she perceives in all vigilantes, but now they are in irreducibly common cause. 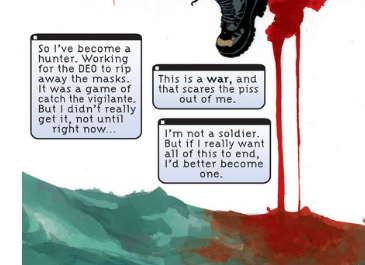 I should add, to my great amusement, that the sentiment in that last bubble is felt by 100% of basic trainees. As we’ve learned over and over again as the series explores the power of myth – the power of lies – identity is constructed, agreed upon, lied about, and built until it has a consecration of its own, usually by people in distress, usually by people who just want to go home.  Batwoman, Wonder Woman, Flamebird, Chase, and apparently even Medusa and Ceto – everyone is just trying to get home to their most cherished set of lies and will have to tell a fresh set of lies about themselves in order to get there.