Patrick: There’s a point in issue 16 where Moonrunner refers to being stuck in The Hunted as “a fate worse than death.” It’s a hyperbolic cliche — one that gets trotted out whenever a writer wants to artificially heighten the stakes. The phrase caries an added significance here in the final pages of Blue Beetle. If the Jaime Reyes dies here, then his story ends, and the bittersweet message he recorded for his family serves as a poignant farewell to the emotional origins of this character. But if Jaime Reyes survives this series, he’ll be put into the reality / game show “The Hunted,” which means he will linger on lifelessly in the pages of the largely abysmal Threshold. For anyone attached to the Blue Beetle, seeing him languish in another series (just as this one was starting to feel real again) is a fate worse than the character’s death.

Blue Beetle and Moonrunner escape from the exploding Reachworld with relative ease, but the next question becomes how to get Jaime home to Earth. Moonrunner concocts a scheme that involves docking at a Mos Eisley-esque planet within the DMZ between Reach-Space and the Space controlled by Lady Styx to get a better FTL drive. Unfortunately, the place is a little too much like Mos Eisley and our heroes get into trouble like five minutes after landing. Turns out, Moonrunner has a price on his head and Lady Styx wants to capture the free-willed Scarab and put him in The Hunted and Sky Witness still wants his armor back. Man, outer space is the worst. Styx’s goons show up and try to capture both Moonrunner and Jaime, but Sky Witness can’t stand to see his armor bossed around so he jumps to their defense. The Styx goons murder Sky Witness and then overpower Jaime. End of series. Grim, right?

These issues also take teeny tiny breaks from the science fiction action to connect the boy in the blue battle armor to his family, his culture and his history. I’ve been lamenting the absence of that connection since we started covering this series at the Zero Issue. In addition to the goodbye message I mentioned in the introduction, we also get a nice little flashback to Jaime lying in the grass with Paco and Brenda, having the sort of conversations teenagers have about the universe. They chat about how big space is, and muse about what aliens might be like. There’s obvious irony that it’s immediately followed by images of Jaime battling hostile aliens, but it doesn’t take away from the fact that this is a normal, grounded conversation that you have when you’re a kid and concepts like “the bigness of the universe” are brand new to you. I love it — it makes Jaime real, and reinforces the idea that under that armor, he’s still just a kid.

I also love that Jaime’s final goodbye to his family plays out as he and Sky Witness are being brutally beaten by Styx’s goons. It’s a moving sequence — Jaime’s message is so hopeful, but the action is so dire. It’s also one of those situations where a character gets to express his own feelings as though he’s some third party, thus freeing himself up to be a little more candid. Also, from hundreds of thousands of lightyears away, he’s got the courage to put his heart on the line and honestly express his naked love for his friends and family. And that does take courage, just as we saw in New Guardians earlier this week. Match that up with Blue Beetle’s last stand, and it’s a stirring note for the character to go out on. 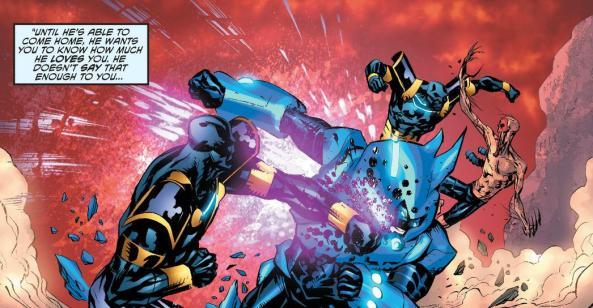 But I’m also surprised to find that I’m so engaged by the space-adventure stuff too. I think it’s because Tony Bedard is actually having fun with his scripts again. Issue 15, in particular, embraced the similarity of our heroes’ situation to Star Wars. Bedard includes a location banner that notes that Moonrunner and Blue Beetle are in a galaxy “far, far away from Earth,” and I’m definitely not super-imposing comparisons between the planet they landed on and Mos Eisley. Jaime even makes a “I have the death sentence is twelve systems” joke when he realizes Moonrunner has a price on his head. My favorite little detail is that artist Scott McDaniel sneaks Greedo (or a Rhodian, at least) into a panel.

These two issues function as one nice little whole to remind me what I liked about Blue Beetle in the first place — it’s a fun science fiction adventure story grounded by a real kid with a strong cultural identity with an emphasis on his family. I only wish that Jaime would have died at the end of this run, as it seems like such a sweet sad moment for the character to go out on. I won’t be following him over to Threshold (because, fuck that noise), so this might as well be the end of Blue Beetle for me.

What did you think, Drew? I’ve been making the ol’ “I swear, it used to be good” argument for a while now, and I largely feel like these last two issues were able to get back to what made me feel that way in the first place. Did you find the last issue to be as cathartic as I did?

Drew: Not exactly, but I can see why it would be satisfying for someone who has followed Jaime from issue 1. I can abstractly understand how emotional that farewell message scene would play if I was more invested, but it’s tough for it to resonate when this is the first time I’ve ever seen these characters. I can’t hold that against Bedard — it’s not his fault I missed the first dozen issues of this series — but it does appreciably change my experience of this conclusion. I’ve only ever experienced this series as frivolous fun, so the thought of Jaime smashing into the decidedly un-fun world of Threshold is especially disappointing.

To Bedard’s credit, he makes things exciting to the end, actively identifying all of the things that make Threshold so lame. Those Star Wars references, for example, do the story much credit beyond simple homage — Bedard is successfully identifying the most exciting elements of that universe. It’s fun to reference Greedo — easily the second most famous bounty hunter in all of Star Wars (and, importantly, the one we associate with Mos Eisley) — but it’s also neat because of the world Greedo represents. Having bounty hunters and untrustworthy smugglers running around implies a very fun corner of the universe, but is one Threshold already seems intent on sapping the fun from. The idea of bounty hunters and untrustworthy smugglers looses its cool very quickly when literally every character we’ve met falls into one of those two categories.

My issues with Threshold notwithstanding, Bedard manages to fold us into that series quite naturally. I was actually quite happy with Jaime’s decision to go back to rescue Sky Witness, who had only issues ago been trying to kill him. It’s a heroic way for Jaime to go down, and makes his loss here feel earned. It would have been easy to have Jaime simply apprehended, but the fact that he makes a choice makes it much more compelling. 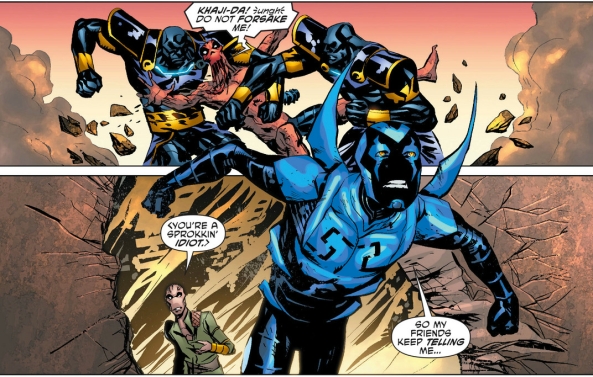 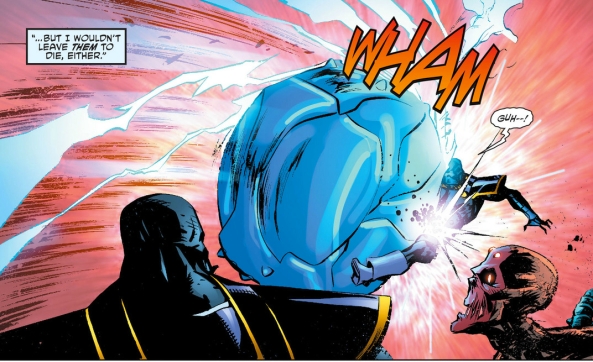 Unlike Patrick, I’m not particularly worried that Jaime will be stuck in threshold too long — I suspect it will be cancelled ere long — but I also see a pretty clear alternative to leaving Blue Beetle out in the cold: add him to Teen Titans. As a character with strong family ties, he could add some much needed ballast to the team. I’m also a big fan of the dynamic of his early appearances on Young Justice (which I often lament isn’t the approach DC had taken to Teen Titans in the reboot), where Jaime is trying to keep the antagonistic relationship with his armor a secret from the rest of the team. Point is: there are places in DCs universe better than both death or appearing in Threshold, and I hope Jaime finds his way there before too long.

One final complaint about Threshold: if they’re so hard-up for skilled contestants, why don’t they just use the goons that catch the people in the first place? Those dudes are pretty hard to bring down.