Today, Shelby and Drew are discussing Teen Titans 16, originally released January 30th, 2013. This issue is part of the Death of the Family crossover event. Click here for complete DotF coverage.

Shelby: What is the point of being a villain? Some do it out of greed, like the Penguin, others for a cause, like Poison Ivy. Then there’s the Joker, who’s just a psychopath. The source of his villainy is insanity; he is chaos incarnate. You’d think that would make it easier for writers to use the Joker in their stories. Just think of the craziest, most out there plan, add some gratuitous murder and cruelty, and you’re done, right? Wrong-o. The Joker is chaos, but he’s directed chaos. He has an end point in mind, there is a “reason for his madness.” Batgirl  plays with the core idea that the Joker’s latest spree is based on love with a twisted wedding. Batman and Robin also ties back to love, either the love of Robin for Batman or the love of a son for his father, depending on whether or not you believe the Joker knows who everybody is. Teen Titans and Red Hood, however, have a tougher time showing us that central theme of love, so that at the end of the issue I’m left wondering, “what was the point?”

The Reds Robin and Hood are lying on the ground, unconscious and handcuffed together by a long chain. The Joker monologues for a bit, then wakes them up to show them their big surprise. 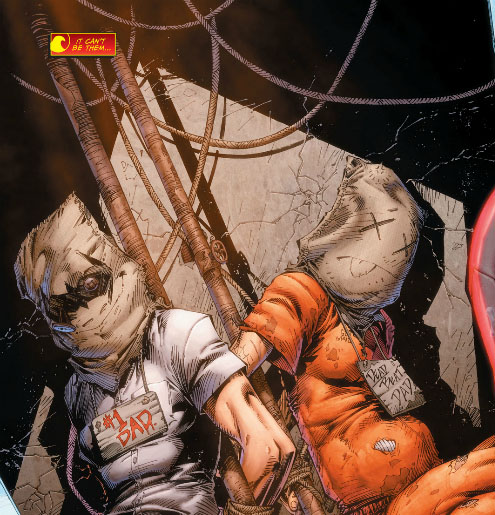 Yep, he’s got their “dads,” and the plan is to have Tim and Jason fight to the death; the winner is the one whose father will live. Tim immediately knows the Joker is bluffing; unfortunately, Jason immediately points his gun in Tim’s face. A fight ensues, and Tim takes a chance; he breaks the glass cage (?) they’re fighting in, shouts “Hood, now!” and Jason riddles the Joker with holes. Except, it’s not the Joker, it’s a dummy or robot or something, because all those holes spew Joker gas. The boys are knocked out again, and the Joker drags them off to the party. Meanwhile, the Teen Outlaws are on clean up duty. Solstice wonders if the surge in her power is due to the mysterious Lance; turns out it is, because he’s watching the whole scene go down. He gets taken down by a member of Basilisk. Meanwhile again, Lord Trigon (remember Phantom Stranger 1?) has successfully transformed his daughter into Raven, and is ready to unleash her on the world.

This issue is just awkward, both conceptually and in its execution. Scott Lobdell and Fabian Nicieza try to carry forward the question “Does the Joker know the Bat-Family’s identities?” but they aren’t nearly as successful as other writers in this event have been. I tend to believe the Joker does know, Patrick and Drew tend to think he’s bluffing, but I think we can probably all agree that this issue’s attempt to create that tension is clumsy at best. It’s just so obvious that those men with their faces covered are not who the Joker says they are that it removes the tension from the situation; it turns into Jason and Tim fighting for basically no reason. The whole Robin fight is pretty convoluted. Jason turns on Tim, but then Tim fakes that it was a part of their plan the whole time, and then Jason separately claims that was actually his plan the whole time. Is Jason talking out his ass to save face? Probably, but since I don’t believe he would instantly fly off the handle like that in the first place it doesn’t really resonate.

Speaking of not making sense, I can’t understand the physical space in which this issue takes place. It appears the boys are in a glass house on the roof of Joe’s Garage. I thought the Joker had gone inside the building to his little command post, but it appears he’s actually just on the other side of the glass. That leads to images like this. 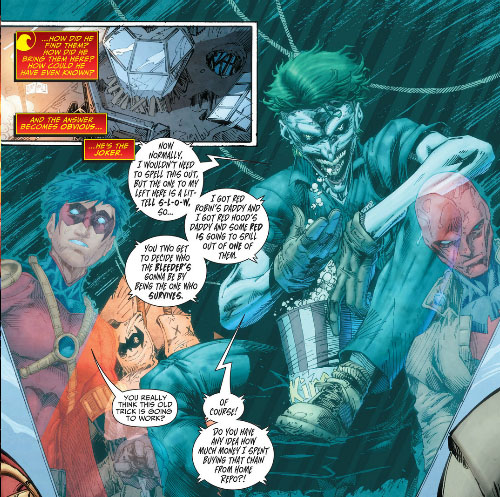 Brett Booth is trying to layout exactly where everything is; he succeeds, but ultimately this space doesn’t make any sense. The Joker is behind the glass. Tim and Jason are reflected in the glass, as are the dads, so they are behind the Reds. Here’s the thing: there’s no glass between our boys and their dads, as you can see in the color shift in the image above, so why don’t they just leave through this hole in their prison? On top of that, the inset panel shows the exterior of this glass house, so there’s actually no way my theory pans out.

My real beef with this issue is its pointlessness. What exactly was the Joker trying to do? What was he testing? If he actually thought the boys would fight each other to the death, how did he also know Red Hood would shoot his gas-filled stand-in? The boys wake up, fight, and are knocked out again; the whole point of the issue seems to be merely that it exists as another issue before the big finale in Batman 17. I didn’t even get to the incredibly awkward dialogue between Arsenal and Wonder Girl. What do you think Drew, is there something more we’re supposed to be getting out of this issue?

Drew: Nope. Over the weekend, Patrick and I were going over the plot for Death of the Family, and we couldn’t get over just how often our heroes have been knocked out since the Joker arrived. Part of that is built into the event — everybody needed to end their 16th issue waking up to Joker presenting them a bloody platter — but I suspect the rest were simply ways of jumping straight to Joker’s machinations. Both Jason and Tim are knocked out first thing by Joker, completely robbing them of any sense of agency, and rendering everything that happens between when they’re knocked out the first time and the last entirely moot. It’s no surprise that the titles Shelby sited as handling this crossover well — Batgirl and Batman and Robin — find their heroes being knocked out for the first time at the end of issue 16. Sure, the end result is the same, but the fact that they end the issue in a different state then where they started imparts a sense of forward motion that is entirely lacking here.

As if being knocked out, revived, and knocked out in this issue isn’t embarrassing enough for Jason and Tim, they actually already went through the same exact thing in their respective issues 15. That means this issue ends with them each being knocked out for the third time since the Joker’s arrival. Never mind the long-term damage to their brains, couldn’t Lobdell have been bothered to come up with a more compelling reason for his heroes to move from point A to point B? Babs and Damian were both apprehended trying to save people. Not only is that more interesting than just having the characters knocked out AGAIN, it also treats them as something beyond furniture. Moreover, it makes Joker’s actions feel more like an intricate plan than some kind of dinner theater.

As for Jason’s claim that he knew what Tim was thinking: it’s kind of a catch-22, isn’t it? Either you believe Jason really would turn coats — and be willing to kill one of his only friends in the world on the prospect of saving a deadbeat dad he already thought was dead — so rapidly, which diminishes his character immensely, or you take his word for it, which robs their fight of all of the tension Tim’s voice over suggested. 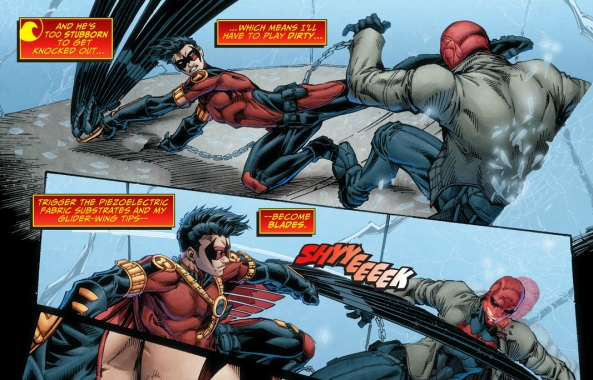 Speaking of that fight, it’s kind of weird what a big role Tim’s glider cape plays here, given that they made an explicit point of saying that he didn’t have it in issue 15. What was the point of Jason being in the “original Red Robin armor” just for that issue? Why would Joker go through the trouble of changing his clothes just to change them back?

As for the whole “does Joker know” question, I know my “no way” argument falls apart around Jason, who apparently really was made Robin by design of Joker. Like, even if Joker is just wildly guessing at this point, he’s still dead on the money, so he must know, right? But then, why be so ambiguous with everything else? Why refer to Batman as Damian’s “father figure,” or seem to be oblivious as to Dick’s real connection to Haly’s circus? At the very least, it’s supposed to be ambiguous, so I’m left to assume that Lobdell just isn’t playing ball. It’s not the happiest conclusion, and actually takes Lobdell’s contribution from totally inessential to possibly harmful to the illusion being crafted in the event as a whole.

Perhaps the funniest part of all of this is that we still don’t know how Tim was captured. Given that he goes from inexplicably captured and knocked-out in issue 15 to still inexplicably captured and knocked out at the end of issue 16, the role of Teen Titans in this event is decidedly disposable. In fact, you’d probably be less confused if you skipped it. It’s a fascinating — if unfortunate — feat, but not one that makes me interested in pursuing this title any further. Goodbye Teen Titans! I guess we’ll see you at the next big crossover!