Patrick: In a sequence that perfectly epitomizes how I feel about the Ozymandias mini-series, Adrian Veidt holds a press conference as his alter ego. He removes the mask and the costume, revealing to the assembled reporters that Ozymandias and Adrian Veidt are one and the same. He says that all non-Doctor-Manhattan heroes have effectively become irrelevant — a sentiment echoed at one point or another by just about everyone in the Watchmen universe. Vedit can accomplish more good as the head of Vedit Industries, which prompts one reporter to ask “So, this is all about the money?” Never mind that this isn’t at all what Vedit was saying, he addresses the question head-on, bluntly saying “In this end… isn’t everything?” That reads as a rather cynical explanation for Before Watchmen, but interestingly, Veidt can’t keep his word about staying out of costume, donning the cape again to fight petty crime during the police strike. The message? It’s all about money… except when superheroes are involved: then it’s about something else.

Ozymandias 5 continues to follow the audio diary of Adrian Veidt, alternately re-staging scenes from the original Watchmen and offering perplexing explanations that Alan Moore must have deemed unnecessary in 1986. The first such explanation explores the origin of the fake-alien-attack plan. Veidt, claiming that his brilliant mind is not a creative one, goes on a science fiction bender, reading every book, watching every movie and TV show, searching for solutions to the whole doomsday clock scenario. Reportedly, he got the idea from an episode of The Outer Limits. He’s referring to the 1963 episode “The Architects of Fear” (and because we live in the future, you can watch it here).

The idea to create a “common enemy” leads Veidt to some amateur-biological engineering. Staggeringly, the result of his failed experiment is the kitten Bubastis. And even though this leads to a “kitten pissing on Ozymandias” joke, you can’t but coo at this absurdly cute drawing of baby Bubastis.

Cute as that may be, it’s sort of insane to suggest that this creature was a mistake. First of all, mistakes aren’t really something we’re used to seeing Adrian commit. Even when he murders half the population of Manhattan, he does it on purpose. We see on odd amount of Ozy deviating from his prepared script in this issue. Like when he puts the costume on during the riots in New York – why would he do this? It’s not because he believes superheroes should be out patrolling the streets at this moment, and just a few pages previous, he was making the case that he’s more effective in his civilian identity. He makes the illogical choice to put the mask on and… do what exactly? He confronts a child who is tagging a building with the classic “who watches the watchmen?” He moves on to some looters, but for Len Wein, as for Veidt, this is an afterthought. In this moment, Veidt is exclusively interested in expressing his power. Why else would he do this instead of merely confiscating the spray paint? 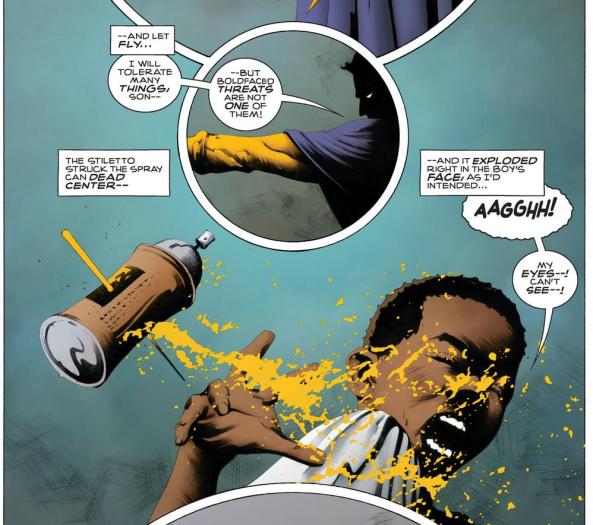 It’s an interesting statement about Ozymandias — partially because the character is traditionally defined by a single trait: his persistent faith in reason. His passions and excitement for being a costumed hero override the voice of logic that tells him to leave the riots to his compatriots even though he just went through how each one of them was qualified to do them job themselves. Here’s the outrageous thing: I totally buy it. I wish there was more of this reckless behavior in this series, as it casts his final gambit in different light. Could a man of Veidt’s intellect have saved the world without employing a squid-monster leveling New York? Yeah, maybe he could have. But that’s not the decision he made. The poster in his childhood bedroom, the fascination with science fiction literature suddenly take on new meaning: there is something more important to Veidt than cold hard logic.

Much of the rest of the issue is clinical in its storytelling. We see Adrian working with Doctor Manhattan on adapting his teleportation technology — not really something we have to see. We also see him purchasing the island on which his team will develop the squid-monster. Again, this is clerical, I don’t need to actually see it happen. Fortunately, Jae Lee’s art can elevate the most mundane plot retreads. Check out the scene where he purchases the island:

Those craggy cliffs, the dense fog, the biplane with water-landing gear and our heroes in silhouette — it’s classic adventure-story staging. I also love June Chung’s smokey colors, which grant an extra layer of mystery and excitement — even to a scene as pointless as this one.

Michael, how’d you feel about this issue? I sorta surprised myself with the generally positive tone of this write-up. I still think there’s a lot of wasted space in here, and there are a few turns of phrase that I think are being used incorrectly, but I almost feel like the slight recharacterization of Veidt is worth it. For a less convoluted prompt, try this: why is this Veidt’s audio journal? We’re taking it in as a written medium — doesn’t that just complicate things? Maybe it serves to make him appear more tech savvy than dinosaurs like Hollis or Rorschach who use written journals?

Michael: You’ve given me much to ponder, Patrick. First, I just assumed Veidt’s book was only available in audiobook so as not to risk an imperfect reading. I completely agree that despite a lot of unfocused inaction, this issue showcases Veidt in an interesting and challenging way. You suggested that when Veidt deviates from his logical traits, he exposes another driving element of his personality. I’d say I partly agree with you there and that — if anything — that element is Ego, which we already knew he has in spades. But I’d like to go even further and subject you to a questionable deconstruction of this issue as a reaffirmation of what I know Ozymandias to be: a calculating dork.

Let’s consider his participation in the quelling the riots. I can’t think of any lamer ways to go about protecting the city than stopping the graffiti kid and the looters. Why would he break his oath and logical decision to focus on industry, you ask? Because the risk is low and the branding opportunity is high. That’s right, Veidt is a brand conscious d-bag, logical as ever. Perhaps he’s being flip when he reveals that his action figure hits the shelves the next day, but that strikes me as a pretty typical Ozymandias logic move — wear the suit for a few hours, get a healthy bump in sales. It’s certainly not a romantic explanation for that behavior, but it is consistent with dorky opportunism. 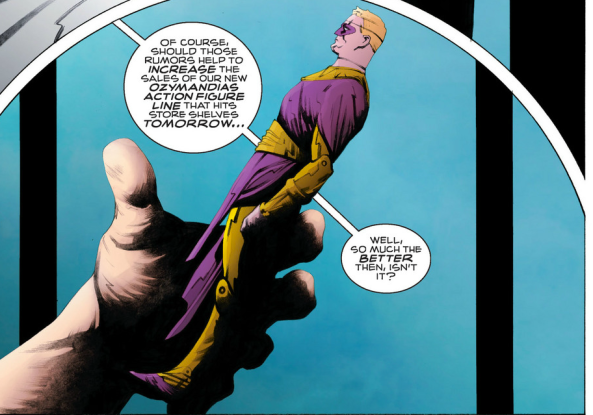 I too found it hard to believe Bubastis was just a botched monster. I read it as a sort of laboratory humble-brag. It makes no sense — even in science fiction logic — but I buy it! Maybe Veidt just wanted a cat and thought adopting an abomination was a better backstory than customizing a kitty. Maybe Veidt is so good at science that he programs all his transmogrifying machines to make a feline friend as an abort function. These are all satisfying and stand up to my estimation of Veidt. Sure, I can’t prove that this impossibly perfect accident-cat signifies anything more than an attempt to sleuth something we like into the reboot. But that kind of mistake reminds me of awesome guitar players trying to impersonate a beginner — for all their familiarity with their instrument, they can’t recreate instinctual awfulness. Remember when Veidt’s father discouraged him from achieving perfection?

Everything about Veidt is just slightly off, so I’m not too surprised when he bucks my foolish emotional understanding of the world. He forces inspiration by reading every book in a genre and when that doesn’t work he just starts reading them again — he mentions that he speed reads, which I’m sure is part of his inspiration problem. Veidt watches The Outer Limits the way no one should: smugly and oddly detached.

I’m inclined to give Veidt the benefit of the doubt regarding anything that seems to contradict his character. I’m even resistant to believe that something deeper is driving him. Because he’s a genius. That’s the assessment that this world has of Ozymandias. So my hope is that his intentions are as diabolical or more so than I’m giving him credit for. When he strikes, I’m rooting for an unthinkably horrible act that also kind of makes some sense. After all, Veidt spends a third of this issue staring off into space meaningfully, so when something goes down, it had better be good.

14 comments on “Before Watchmen – Ozymandias 5”