Scott: This comic is called Animal Man, but it’s hardly about Buddy Baker at this point. Sure, Animal Man and Swamp Thing are the focal points of the RotWorld crossover event, but their personal objectives and motivations are overshadowed by RotWorld itself. There are so many characters fighting against the rot that it’s tough to consider Animal Man the main character in this issue, and even more difficult to think of his personal motivation — to save Maxine — as the emotional center of the story. Throw in the fact that this issue truly is a crossover with Swamp Thing, and it’s harder yet to think of this as Animal Man’s story. Not that that’s a bad thing. Animal Man is part of an awesome team fighting against the Rot, and the collective inventiveness they display here makes Animal Man 17 a thoroughly fun and often jaw-droppingly cool experience.

Animal Man and his crew, namely Steel, Beast Boy, Black Orchid, Frankenstein and Green Lantern Medphyll are locked in battle with the Justice League Rot. Despite being slowed somewhat by the Rot, The Justice Leaguers are still pretty powerful, so the good-guys have to get creative in order to defeat them. Animal Man has had to become increasingly crafty throughout RotWorld, as the spread of the Rot continues to limit the number of living animals he can draw power from. He can’t summon the speed of a cheetah, so instead he uses ants and cockroaches — critters that “thrive on death” — to give him the energy to catch up to The Flash. This was the first of several awesome “take down” sequences. I love the idea of an evil Flash, a blur of red and gold that can kill you before you even see it coming. It’s just so terrifying. He can essentially pick his enemies off like a sniper. Having Animal Man ramp up his speed until he is finally able to see The Flash as a man and not just a blur is so cool, and so hard to do justice to visually. I would have loved to see how The Flash artist Francis Manapul would have handled that sequence, with his wealth of experience drawing panels that toy with how we see time and space at high speeds.

That’s not to imply that I was disappointed with the art in this issue, because that isn’t the case at all. Artistic duties are split between Steve Pugh, who handles the Animal Man side of things, and the tandem of Timothy Green and Joseph Silver, who cover the Swamp Thing sections. And kudos to colorist Lovern Kindzierski, whose color scheme really sets the tone for this death-ravaged universe. I sometimes think of RotWorld as looking dull or monochromatic, but every time I look at this page, something new pops out at me.

It’s crazy how much is jammed into this page, and the little splotches of color keep it from looking like a mess of purples and grays. This page also reminds me of my next point: how awesome is Rot Superman?? I was hoping he would stick around for awhile simply because he looks so damn cool, but unfortunately (but, actually, fortunately) he was the subject of the next awesome takedown. After discovering that Rot Superman isn’t vulnerable to Kryptonite, Swamp Thing figures out that Superman’s dying cells no longer get strength from the sun, and that exposure to sunlight might actually destroy him. Swamp Thing tells Freeze to fire at the sky and clear a hole in the clouds, but Freeze gets all confused and dies. Man-Bat manages to grab the gun and get a shot off, and BOOM! No more Rotten Supes.

That BOOM! transitions us back to the Animal Man half of the issue, where the fun continues. Shepherd shows up and starts kicking some ass. Steel takes down Cyborg, then takes control of his body and his weapons, creating an awesome single-minded, double bodied robot. It’s all fun and games until Medphyll is abruptly beheaded, leaving his ring in need of a new bearer. The saddest moment of the issue quickly becomes the coolest, as the ring selects Frankenstein.

Frank becomes a Green Lantern, complete with a sleek new cloak-vest and a regenerated arm. He says some cool Frankenstein-y words of acceptance, then promptly cuts Wonder Woman in half. Frankenstein no longer has his own title, but he has been a big part of the RotWorld event, so I love that Jeff Lemire and Scott Snyder give him this shining moment. Then again, if anything as great as this ever happened in Agent of S.H.A.D.E., maybe it would still be around.

By the end of the issue, Animal Man and Swamp Thing are side by side, a meeting that we’ve been waiting for since RotWorld began, and they are confronted by Anton Arcane, who has a surprise for them. But seeing what has become of Maxine and Abby was not the most affecting moment of the issue. For me, Animal Man 17 was all about the fun of seeing my favorite superheroes getting killed in clever ways. I haven’t checked out Swamp Thing 17 yet, but I’m not sure it can be as much fun as this one. What about you, Shelby? Did you enjoy this issue as much as I did? I’m interested to see what happens with Maxine and Abby, but I honestly find the stuff concerning the non-central characters to be more compelling. Do you feel the same way?

Patrick: Surprise! It’s me filling in for Shelby. Let me just say, on behalf of Shelby, yes, she liked this issue very much. Unfortunately, whatever else I say is going to be representative of my stodgy opinions, which have been known to differ from Shelby’s on occasion.

This issue was kind of the Battle of Five Armies, a la  The Hobbit. Our heroes’ armies are many, but the enemy is somehow even stronger. The tide suddenly turns when soldiers from the sky drop in and balance the scales — in The Hobbit, it’s the Eagles; here, it’s those guardians of the Red. The difference between the two — and the reason I think this sequence is wildly more successful than the Battle of Five Armies — is that we get to play along with every tactical victory. Scott called them “take-down moments,” but consider how rare it is to have a battlefield populated by such familiar faces (on either side). Readers instantly understand the struggle of defeating each one of these threats AND the rush of adrenaline when one of them is confronted head-on. Nameless Dwarves, Elves and Humans fighting walls of Orcs and Goblins? Not nearly as much fun.

The Siege of Rot Castle is also just fucking awesome because of all the little tweaks that make the characters unique in Rotworld. As Scott mentioned, Flash re-purposed as a murder-machine is terrifying. But I absolutely love Girl-Bat (or whatever we call Barbara Gordon in Bat-form). Mind you, I always love Batgirl, so it’s not really a surprise that seeing her KICK ASS would be such a satisfying experience.

Hey, did y’all catch Lemire taking yet another sly dig at shitty writers at DC in this issue? This time, his satire cannon seems to be aimed at Catwoman scribe Ann Nocenti. Watch how he kills off Rotified Katana (written by Nocenti and on sale this month) and Rotified Catwoman in consecutive panels. 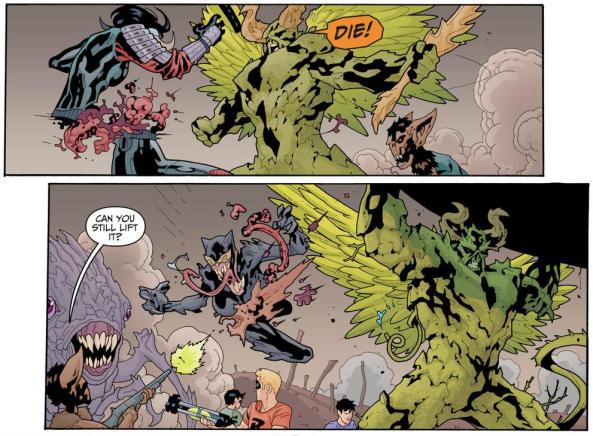 Man, it’s sorta weird to see the Green/Silver team (how weird is is that that artists both have colors instead of last names?) work on a chunk of Animal Man that isn’t focused on the Baker family in the pre-Rot era. I like it a lot, and the clarity of Green’s staging goes a long way toward making the Swampy portions of this thing so engaging, but I had gotten very used to that flashback structure that we’ve been using over the last 5 or 6 issues.

I’ll ask the question: what the hell is Channel 52? Since I read these things digitally, when I got to the end of the Animal Man story and saw the “Continued in… Swamp Thing 17 ,” I dutifully switched right over to Swamp Thing.  HOW COULD I NOT? But it turns out that there’s this two-page… jokey thing? It has no credits associated with it and appears to be just a crummy news broadcast set in the DC Universe. Since I missed it (and people who skipped out on Animal Man might have missed it too) I’m posting the pages here for y’all!

There’s a Queen Industries logo and a mention of Oliver Queen, so I’m guessing this is just to build a little hype for Green Arrow (on sale this week!) newly written by Jeff Lemire. Whatever it is, there are some solid jokes in it, and more than a few keen insights on the way the DC Universe does / doesn’t work. Why wouldn’t there be a dude that’s some kind of green bug working as a field reporter? Also cool: A. Bug reports that there might be a new Batwing coming soon — that ties into the real world announcement (made the day after this issue came out) that Jimmy Palimotti and Justin Gray will take over writing Batwing with issue 19. Like I said, I don’t know where this thing came from, or who created it, but I would happily read a little Channel 52 at the end of odd issues in the future.