“It’s horrible when you sense the “to be continued” coming. You know, you’re watching the show, you’re into the story. You know, there’s like 5 minutes left and you realize “Hey! They can’t make it! Timmy’s still stuck in the cave. There’s no way they wrap this up in 5 minutes!” I mean, the whole reason you watch a TV show is because it ends. If I want a long, boring story with no point to it, I have my life.”

Drew: Comics are a serialized medium. Spirited debates can be had about the relative virtues of straight serialization or a more episodic approach, but most readers understand that a given story may not wrap up in a single issue. The surprise “to be continued” described in the epigraph doesn’t happen as often in comics, where issues are clearly billed as the conclusion, but I found myself reminded of that experience as I neared the end of Swamp Thing 17, realizing that the “Finale” billed on the cover might not be so final, after all.

The action picks up right after the startling reveal of Animal Man 17 (but also kind of Animal Man and Swamp Thing 16: that neither Maxine nor Abby are alive. Maxine, rotified as one of the Hunters Three, grapples with Buddy, while Alec fends off an army of lobotomized Abby clones. With any hope of saving their loved ones gone, they focus their attention on Batman’s green bomb. Anton does his best to slow them down, but Alec and Buddy manage to detonate the bomb in the sky, raining down bio-restorative formula, effectively ending the Rot’s reign of terror. Alec and Buddy pursue Anton into the castle, where he escapes into the realm of death — that’s not a euphemism for suicide, but an actual physical (or metaphysical) place. Fortunately, the Rot is unhappy with their avatar’s behavior, and allow Buddy and Alec to follow him into “the timeless void of death.”

Don’t get me wrong — this was a jam-packed issue — but with this issue billed as the finale, and the next issues billed as “epilogue,” I expected some falling action, or at least for the villain to be vanquished. The battle may be over, but Anton is still on the loose, and is apparently capable of retrying his whole mad grab for planetary dominance. The specific wording of “the timeless void of death” makes the mechanics of the Rotworld reset pretty clear, but I thought the epilogue would detail the return to normal, not the final battle before that return. Maybe this is just my expectations being out of whack, but that familiar sense of “they’re never going to make it” crept in as I approached the end of this issue.

What’s always interested me about that Seinfeld quote is the way he starts with the assumption that you’re wrapped up in the episode and kind of chronicles how your familiarity with the medium pulls you out of the experience as the clock ticks down. It’s not the episode’s fault that you looked over at the clock, but once you know the episode isn’t going to resolve, you can’t forget it, the act of watching has overtaken the experience of watching. All this is to say, I can’t really blame Snyder and Lemire for not concluding the arc here and now, but I also can’t not let it color my experience of it, which is a shame, because there were a lot of great moments here.

Buddy tearfully killing the monster that was his daughter is a standout, but I was also enthralled by the way Lemire and Snyder masterfully build the tension in that battle. Steel manages to get the Bat-bot in the air, but each roadblock Anton throws up had me biting my nails. And let’s be honest, that final explosion was pretty awesome. 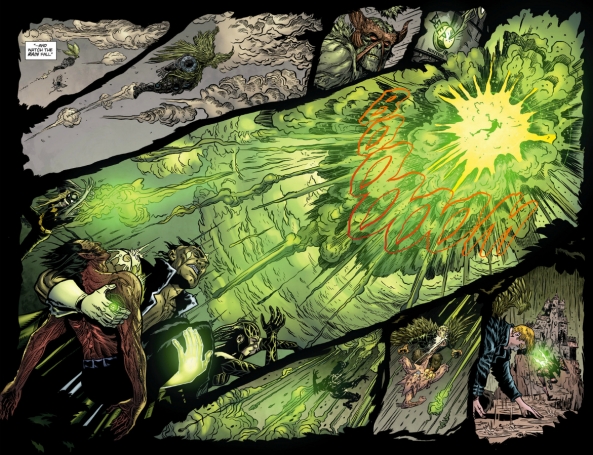 On a side note, you notice that figure cowering behind Frankenstein? Computer: rotate and enhance. 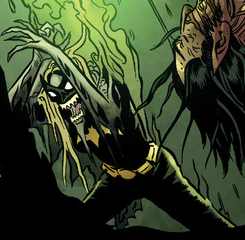 She’s wearing a weird combination of Batgirl and Batwoman’s costumes, but has long blonde hair. I…I think this might be the first appearance of Stephanie Brown in the New 52. I hope the fact that she’s an undead monster doesn’t reflect DC’s plans for her in the future.

At any rate, Mik, I’m still so surprised by the lack of closure here, I’m not sure I can objectively evaluate this issue. Still, I’m excited to hear your reactions to all of these developments. How do you feel about the apparent deus ex machina of a Rot-powered time-machine as the reset button? Were you as surprised as I was that this issue didn’t see the end of the conflict with Anton Arcane (at least for now)? Do I just need to take a chill pill? And seriously, is that Steph?

Mikyzptlk: I hope it isn’t, otherwise Didio may just try to put this comic on hiatus or cancel it all together! Seriously though, this conclusion was…well, unexpected seems like an appropriate word to use here. I understand why you feel unsure about how to evaluate this issue. The build up of this story has been so incredible that its satisfying conclusion felt almost inevitable. Instead, our expectations were subverted with no conclusion at all. It almost feels like those times on the 4th of July when you light up a firework and then it fails to go off. What is that called again? Oh yeah, a dud. I’ve tried to feel otherwise, but after some reflection that’s what this issue (and Animal Man) was for me.

I imagine that Snyder and Lemire are going to give us some incredible epilogues in the upcoming issues, and you’d better believe that I’m going to stick around to read them, but that doesn’t change the fact that the “conclusion” to Rotworld feels like anything but. I mean, seriously, that’s it? This is the “epic” conclusion that was promised me? But, they didn’t even beat the bad guy! Arcane has been slipping through our heroes fingers since the start of this whole mess. While I’m sure that’s been frustrating for our heroes, it hasn’t been for us because the journey has been so incredibly fun to follow. However, a part of that has been the assumption that, by the stories end, our heroes would’ve kicked Arcane’s butt straight our of orbit. To see him get away again just feels like a kick to the head. Which, by the way, is NOT as fun as you might think.

Drew, you are right about that explosion though, it was pretty cool. I enjoyed how our heroes stopped the Rot from continuing its reign of terror. It was fun seeing our time-tossed heroes succeed in their plans to save the future from the Rot. Even if they hadn’t found a way back to the present, they could have stayed in that era to help rebuild. We always knew our heroes would end up back in the present somehow, but I would have been more disappointed had I not seen their victory against the Rot. Having them actually succeed in stopping the Rot in the future validated all of the struggle we saw them endure in Rotworld. Speaking of time travel, Drew, I didn’t have a problem with the mechanics of it, but I was pretty underwhelmed by how it all went down. Arcane jumped into the timestream and then the Parliament of Decay helped Alec and Buddy jump in after him because they realized what a dick he was being. It was just kind of boring. Sure, I liked that the Rot folks saw the error of their ways in trusting Arcane, but the whole scene could have used more action.

The final nail in the coffin for this issue was the art. I wouldn’t say that Andrew Belanger is a bad artist necessarily, but I think the problem for me lies once again in subverted expectations. I was expecting Yanick Paquette and I got someone other than Yanick Paquette. The point I’m trying to make is that I probably would have been disappointed with anyone other than him. However, it doesn’t help that Belanger’s style is much more cartoony than Paquette’s. I understand that sometimes an artist just isn’t available, but I really wish that they had decided to go with someone closer to Paquette’s wheelhouse. I could hardly even recognize Belanger’s Animal Man here. I know that he’s been sporting a leather jacket for quite some time, but under Belanger’s pencils, I couldn’t help but feel that Buddy was missing his motorcycle throughout the entire issue. 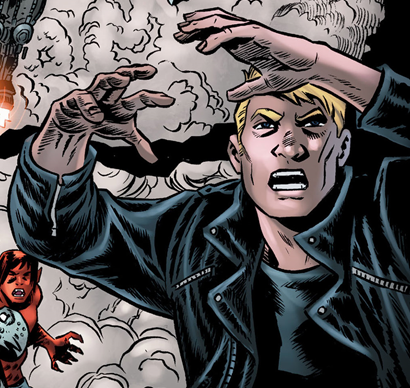 In the end, I feel that Rotworld absolutely succeeded in pushing our heroes to their limits. Not only did they find themselves in an absolutely horrible version of the future, but they had to destroy the final remains of everything that was important to them in order to succeed. However, while the story of Rotworld may be finished, the escape of Arcane leaves the overall arc feeling wide open and unfinished.