Drew: One of the things we love about fiction is the opportunity it affords us to live vicariously through its heroes. This is a feeling familiar to anyone who’s walked out of a movie theater feeling like they could fly, or at least swing from some vines. That’s all well and good when you’re being introduced to these characters for the first time, but that’s decidedly not the situation Teenage Mutant Ninja Turtles finds itself in. A comic written by and for people who grew up playing with Turtle action figures, wearing Turtle pajamas, and chewing (and accidentally swallowing) Turtle bubble gum has the potential to cash in on those connections in fascinating ways, amping up that sense of vicariousness to euphoric levels. Be it repairing a futuristic robot, piloting an alien tank, or more traditional ninja action, issue 19 finds the Turtles living out all of their (and by extension, our) wildest dreams.

The issue finds the Turtles putting their heads together with the Neutrino resistance as they figure out how to rescue the King and Queen from Krang. Don heads off with the Fugitoid to toy with alien tech (because of course he does), while everybody else hatches a diversion while Leo and Mike lead a covert operation to find and rescue the Neutrino royalty. That diversion turns out to be a last-stand-level frontal assault, which finds Raph and Zak the only survivors — and totally surrounded — at issue end. Meanwhile, back on Earth, Splinter, April, and Casey are puzzling over the intel April recovered last issue. Contrast their inaction with Karai, who is already on Burnow Island, slashing her way to the utrom incubator. 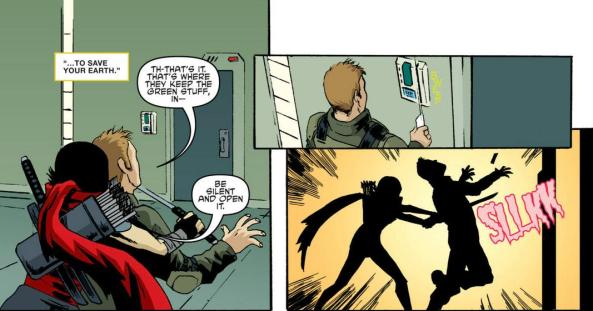 I can’t be certain how intentional this is, but that last detail reminds me immensely of the Death Star Contractors conversation from Clerks. Waltz goes out of his way to depict the Burnow Island goons as normal guys who only understand what’s going on enough to fear their bosses. Patrick and Taylor talked a bit about wonton violence from our heroes last month, but it would be a very icky feeling to see good guys dispatching hired goons (hired goons?) with such ease. Having a bad guy do the deed allows us to have our cake and eat it, too.

The real fun of the issue, though, is back on Neutrino, where the guys are getting to be themselves. It’s an absolute blast watching Don geek out at all of the crazy technology, but as always, I’m totally enamored of the ninja action. Waltz and Bates cleverly split that action with scenes of Raph on the battlefield, creating a very dynamic sense of forward momentum, which very knowingly comes to a screeching halt at the end of the issue. 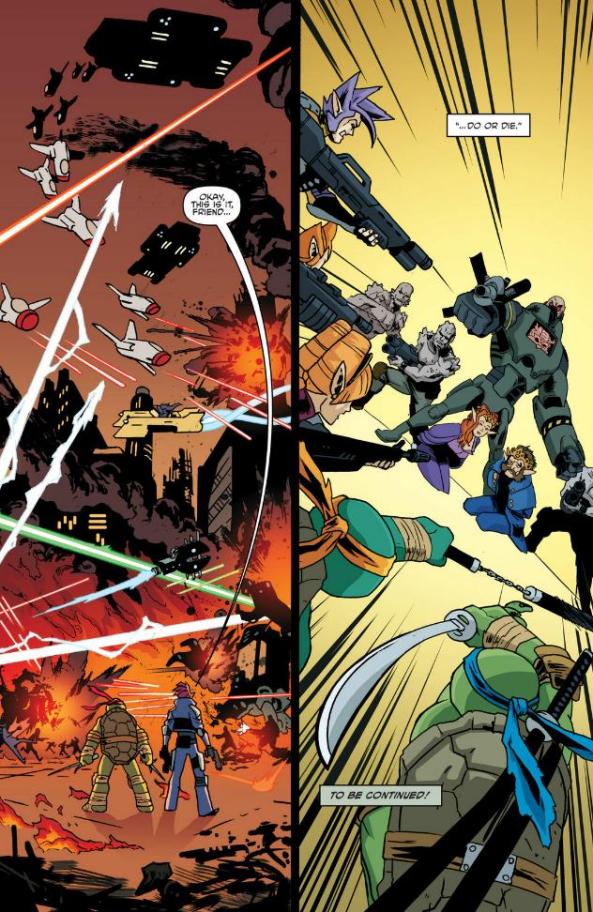 The rules of serialized storytelling dictate that the Turtles (and Krang) will certainly survive this detente, but I’m less certain of anyone else seeing the end of the next issue. Nobody is safe. I’m not sure if that’s exactly the kind of coolness Patrick was calling for to save the Neutrino’s from their Anime-fever-dream status, but it does make for an exciting cliff-hanger. We’re not quite invested in any of these soldiers for their safety to mean much, but I think we might care enough about the Princess for hear death (or even that of her parents) to mean something.

This title always seems to suffer from that special problem where I have too much fun to say much substantive about it. I’m hoping you can rescue me here, Taylor. This issue went very big (contrast this battle scene with the fight scene with Slash at the end of issue 15), and while I enjoyed it, I think I might prefer this series’ quieter moments. I know you weren’t thrilled with the Neutrino action last month — did this issue recover from that stumble, or are we still stuck in that same rut?

Taylor: To get right to it Drew, I’m still not sure if I’m thrilled with this Neutrino action. On the one hand super-epic sci-fi battles are my jam, but on the other it’s hard for me to get behind something that in so many ways seems like a huge gimmick. Everything that takes place in this issue is a trope that has nearly been exhausted by big budget Hollywood movies and this lack of originality is really off-putting to me. Drew, your mentioned the Death Star discussion from Clerks  and sadly that isn’t the only thing that reminds me of Star Wars from this issue. Princess Trib’s hard headed insistence of her inclusion in the battle is something right out of the Princess Leia handbook and the fact that she is decked out in pink commando gear seems like pandering to a gross degree. It almost seems as if the creators of this issue are trying to capture that all important female demographic that has eluded the turtles for all these years. 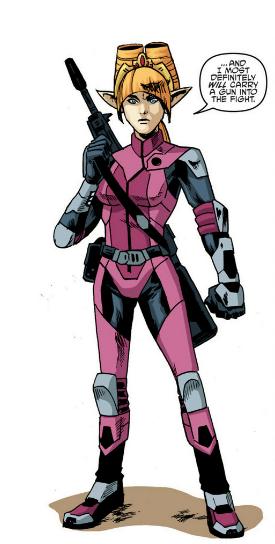 Additionally it seems of the the young male demographic is a target as well. Check out these panels from climatic battle scene:

Look at those vehicles! Is that a guy driving a drag racer and shooting a laser at the same time? Yup. Does that tank have a spiked steamroller attached to the front of it? Yup. Does that other tank have arms? Yup. What is going on here? It’s hard to take this action seriously in any way when such outlandish vehicles are the instruments theoretically dolling out death by the tank-armful. Having been a fan of both the original Transformers and G.I. Joe TV series (along with TMNT of course) when I was growing up so I have a keen eye for potential toy designs. What we see in these two panels, while not necessarily slated to become toys, seem like the type design used to lure in a younger audience. Whether this is intentional or not I’m not sure but it makes for a battle scene that I have trouble getting behind. However, it could be I’m reading too much into this and would find it awesome if I could just roll with it, but I just can’t.

In contrast to this bubblegum action, I’ve come to really appreciate the quieter moments in this turtles series, just as you were saying Drew. I’ve always felt that the heart of this title has resided in the relationship between the turtles and Splinter along with its meditations on family duty and devotion. We haven’t been getting much of either of those lately and subsequently it seems like the series has lost some of its steam. To make up for this absence the series apparently is banking on a shit load of action to distract us from the small amount of meaningful character development or plot movement taking place in these issues. However, the b-story in this issue is a nice little reminder of where we’ve been and hopefully where we’ll return to in time. Karai’s infiltration and cold blooded murder of two guards is a reminder of how serious this comic can be when it chooses to. This series has always been at its best when it is paired down to simple action and good character development and that’s why this particular intersection with the foot clan works well. So just give me pure ninja battle with a side of reincarnation sprinkled in pseudo science and my TMNT pallet will be satisfied.