Jack:  “The time has come,” the Walrus said, “to end this God Butcher story arc once and for all.”

We begin right where we left off, at Chronux. Gorr — hitherto known to us as the “God Butcher” — treats us to his own stark, grim creation myth. He takes us back, ostensibly to the beginning of time, to the kind of chaotic pointless void you imagine in Genesis: 1, only in Gorr’s telling of the story, there is no “Let there be light” moment, only some bumbling, cold, selfish immortals who stand by indifferently while life develops from primordial soup all on its own. Gorr reveals his motive in the slaughter we’ve been watching for the last four issues:  to free mortal men from gods, religion, and servitude to the divine. He tells a gruesome story of how, torturing Young Thor in the cave and — arguably — on the cusp of breaking his will when his victim was rescued by a mob of adoring worshipers, Gorr was inspired to build an army to better destroy the pantheon of deities.  Young Thor and Old Thor meet thousands of years from now at Asgard (no space-time rift initiated by the paradox, evidently). Gorr is slain, and his army of monsters dissolves. Old Thor is reminded that he was, in fact, awesome once, but Young Thor is sickened by the slaughter, refuses any accolades, and orders everyone to never speak of this victory again as long as they live.

My props and gripes fall pretty much where they did last month:  the art is incredible, full of good, gruesome fun from start to finish. The writing, though clean and sharp enough, leaves something to be desired, pushes the reader out rather than drawing him in, as if we were experiencing an outdated translation of an ancient religious text.

Some readers will disagree with me, but from where I sit, character development is basically nil. It is neat to see the traumatic change in a young Thor who suddenly no longer cares to have people the whole world drinking to his health — we can sort of start to see how he became old Thor — but there is nothing to make these mysterious mortals more relatable. And that’s fine:  perhaps relatability is beside the point; they are gods, after all.

Gorr himself is an interesting construction, and this issue elevates him from a conveniently placed psychopath to a crusader with a motive. And what a motive! The gods have mismanaged the universe and abused their mandate, says Gorr, and now it’s time for them to be removed from power in a Bastille Day sort of fashion. He suffers from a foaming-at-the-mouth short-sightedness shared by a lot of kinds of revolutionaries (what will fill the power vacuum when you win? Will that be better? How will you keep it from degenerating into the same, or into chaos? Etc.), but his mission has an even bigger obstacle: the savages he’s fighting to liberate — ie, ourselves — are too ignorant to want to be saved from the tyranny of our immortal oppressors. We so fear a world without meaning larger than ourselves that we sign up to go off to our deaths, with great conviction. Glory, glory, hallelujah, the neanderthal marches on! You can see why Gorr wanted an army to help him execute; the very people he intends to liberate mean to destroy him, those rotten ingrates. I don’t think this issue necessarily weighs in at all on whether or not we’re better off having gods — Gorr may or may not have a point, it seems to say — but the jury is certainly in on our immutable insistence on keeping them, for better or worse. 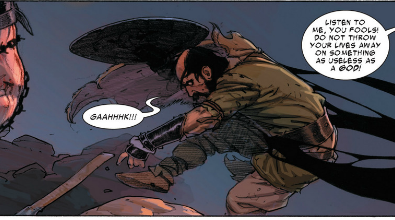 Where do you get off the bus, Shelby? We’ve got time-travel, fractured chronology, the still-beating giant hearts of elder gods, some totally charming death and destruction, plus about 300% of your recommended daily allowance of carnage, not to mention this pesky, hastily inserted little question of whether or not man’s condition is ultimately improved by a relationship with the supernatural — no big deal. Do you get used to the style? Do we have relatable characters? Does it matter?

Shelby:  I do think we have at least one relatable character: Gorr. I get it, there’s nothing to relate to with the whole “God Butcher” thing, but hear me out.

First off, I have a slightly different interpretation of what happened in this issue than you do, Jack. It’s true, Young Thor told his Viking compadres to never speak of what happened in the cave, but I think it’s because, in his arrogance, Young Thor was ashamed of how close he came to being defeated, to betraying his family and all of Asgard. I also don’t think Gorr was defeated at the end of the issue. It’s true, his troops began to disappear when Present Thor showed up to assist Old Thor, but I think Gorr is just marshaling his forces for his big showdown against the Thors.

This is where things get interesting with Gorr. He asks the question, “Where were the gods when I needed them the most?” I’m sure anyone with any sort of religious conviction, no matter how devout, has asked this very question. But when Gorr actually, physically finds the gods who apparently called in sick when he needed them, instead of just asking them why they bailed on him, he tortures and murders them. I don’t think Gorr suffers from revolutionary short-sightedness at all; I think he means to wipe the slate clean and start over. When he came back from the beginning of time with the heart of the first god (which, in my mind, should mean nothing exists, but whatever), I think he was collecting the pieces he needed to build a little god-hood of his own. 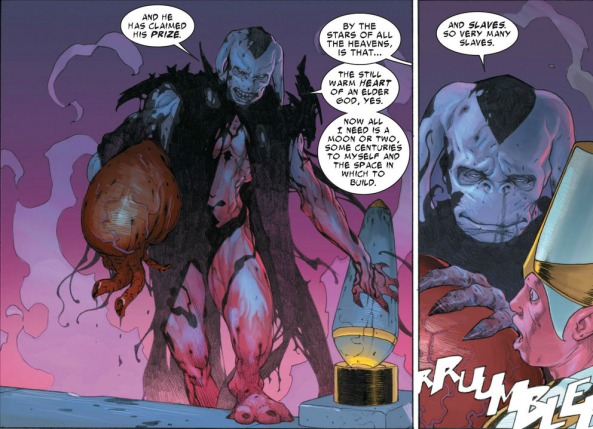 At the end of the issue, Gorr is looking out over the planet he built with all his cool slaves and god hearts, looking forward to defeating not one, but TWO Thors and finally achieving all his dreams. So, what exactly are Gorr’s dreams? He wants to free all living creatures from our self-imposed servitude to the gods, all while setting himself up as a god-like ruler on his own little planet in the future. In that respect, it seems he’s won.

This issue is a strange way to wrap up an arc, in that I don’t feel like anything was concluded. We’ve finally got the full picture of Thor’s history with Gorr; everything is caught up to the present, which is confusing because Present Thor is currently in the future with Old Thor, but there’s no real resolution to the conflict between them. Even with my slight disappointment at the non-ending ending of the arc, I still really like this title. It’s got time travel, non-chronological story-telling, gore, horror, Scandinavian folklore and existential situations to make me ponder my own ideas about God; what more could I possibly ask for in a comic book?