Today, Patrick and Drew are discussing Age of Ultron 1, originally released March 6th, 2013. This issue is part of the Age of Ultron crossover event. Click here for complete AU coverage.

Patrick: Y’all remember Battlestar Galactica? Until the show’s premise became too complicated to be expressed in a few simple sentence fragments, each episode would begin with the following titles projected across the screen:

The Cylons were created by man. They evolved. They rebelled. There are many copies. And they have a plan.

It’s exactly enough information to tease the world of the series. Yeah, there’s a lot more to it than that — this description makes no mention of the last scraps of humanity drifting through space in outdated battleships, or God or gods or Starbuck or Frak. It doesn’t have to: the purity of the threat represented by Cylons is so elemental and to render the rest beautiful, beautiful set-dressing to this central conflict. Battlestar would go on to tell a hundred compelling stories based of that clean slug-line, replete with rich themes and psychologically complex characters. Brian Michael Bendis’ Age of Ultron looks like it will have a great deal in common with BSG, the first such indication is a straightforward and agonizingly clean premise: “Hank Pym of the Avengers created an artificial intelligence known as Ultron. It hates humanity… and it has returned.” Game on.

The story opens on “New York City, Today.” But as the two opening splashes convey, this is not any kind of “today” you or I might recognize — not even with our knowledge of the Marvel Universe. The city is in ruins, and hovering ominously close to the ravaged streets is like the biggest spaceship you’ve ever seen. Hawkeye takes to these streets to rescue Spider-Man. Spidey’s been spidernapped by a gang of mid-level Marvel bad guys. It appears the villains have been bartering for their continued survival by bringing in dead Avengers, and Spider-Man is their next offering. Clint and Peter / Otto (oh, more on that in a minute) make a daring escape that becomes all the more daring-er when Ultron robots attack. Hawkeye gets Spider-Man back to Avengers’ airship, which seems to have crashed in Central Park a long time ago. There, they meet up with “what’s left of [their] friends,” and are subject to some kind of test to make sure Ultron didn’t “infect” them with anything. The question quickly becomes “what now?” — a question being mulled over by the saddest Captain America I’ve ever seen. 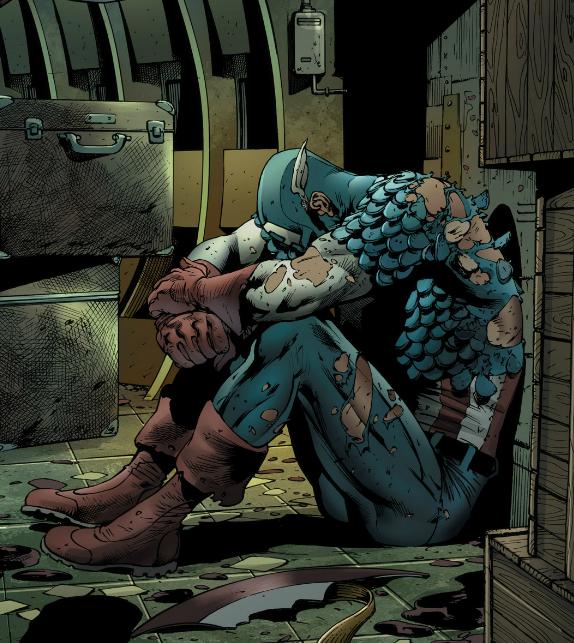 This stunning final image (beautifully rendered by Bryan Hitch), perfectly embodies the tone of the entire issue, in that it raises about a billion questions, but does so in an extremely nonchalant way. What’s that? You want to know how Ultron came to destroy New York City? No dice. You wanna know how Cap’s shield (and presumably, his spirit) was shattered? Nope! We frequently speculate on the way crossover events will end, but this is the first time I find my self speculating on how an event started. Age of Ultron seems to share a lot of its DNA with DC’s Rotworld, which is totally fine by me. It’s amazing how satisfying it can be to spot one of your favorite characters scrapping by in a post-apocalyptic wasteland — it means they survived, and you get to breathe a sigh of relief.

I’m still pretty new to the world of Marvel comics, so I don’t have quite the spot-the-character joy that I experienced while seeing grotesque, undead versions of characters in during Rotworld. In fact, even some of the characters that I assumed I would recognize, I didn’t. When Hawkeye and Spider-man get back to the base, we get the first real sense of who’s still alive: one of whom is She-Hulk. But, that’s not Jennifer Walters (unless that haircut is some kind of survival thing):

I’ll hold my hand up as not-the-best She-Hulk scholar, but she also doesn’t bear any resemblance to Red She-Hulk Elizabeth Ross. This is one of those things where I don’t know if I’ve witnessed a character changing from the trauma of Age of Ultron or some kind of weird editorial force. The other character I want to subject to this question is Peter Parker. Spider-man sounds a lot more Amazing than he does Superior. Without knowing how far in the future these events are set, it’s sort of impossible to know what’s going on here. Has Otto simply mastered the art of pretending to be Peter Parker that he’s even started using fun little action-movie quips when in danger? Or is Peter back in control of this body? I suppose the third reasonable question could be “maybe this takes place in some alternate continuity — after all, the world is ruined.” But we’ve seen that sneak preview of Superior Spider-Man 6AU, and he’s clearly Otto/Peter in that issue — so who knows?

Ultimately, I love having these kinds of questions. Disorientation is a big part of the game Bendis is playing here — this world is sprung on the readers with nary an explanation, which allows the story to focus on the heroics of thwarting this evil, rather than the saga of succumbing to it. Even if Bryan Hitch has a knack for delivering enormous scenes of destruction (and he does), I’m excited at the idea that this situation needs no explanation. Ultron hates humanity — what more would you need to know?

Drew, how do you feel about being thrown into the narrative deep end here?

Drew: I’ve taken my share of fiction writing classes in my day, but it wasn’t until I read Denny O’Neil’s The DC Comics Guide to Writing Comics that I was first introduced to the idea that you should start scenes as late as possible. The notion is that much of what happens before the action begins isn’t that important — sure, some character moments are nice, but we don’t need to see which route the characters drove to get to the scene, or how so-and-so came to own the shirt he’s wearing. It’s an important thing to keep in mind when writing, but the correlating reading principle — that you can assume everything you aren’t shown is either unimportant, or happened largely like you imagined it — is often forgotten by audiences. It’s why LOST fans were so frustrated by the “loose ends” of questions the show’s writers simply weren’t interested in, or why people were so eager to bicker about the ending of Inception.

What I’m getting at is that I actually really like that we aren’t shown how we got to this point. We’re given more than enough details to gather the broad strokes of what happened, and since the story here isn’t how Earth fell, there’s really no point in dwelling on it. In that way, I think the comparison to Rotworld is particularly apt — aside from a few pointed flashbacks (which I suspect we’ll also get here), we’re simply dropped in at Earth’s lowest point, and are left to imagine the details of how we got there. They might be fun details, but they’re not the details this story is about.

Instead, we’re introduced to this world via a rather thrilling rescue operation, where we actually learn quite a bit about the day-to-day life in the Age of Ultron: Ultron is interested in Avengers, Ultron can detect technology when it’s used “out in the open,” Ultron can infect people, the Avengers have abandoned heroism in favor of basic survival — it’s all very bleak, capped off (ha) with that crushing splash of a defeated Captain America. More information may come regarding some of those details in time, but they don’t have to. We know the gist, and this event is clearly more about where we go from here.

But you’re right, Patrick, there are some questions that might be helpful — specifically how the “now” of this issue relates to the “now” of every other issue Marvel has on stands. Is Ultron landing next week? Next year? And how much time passes between Ultron’s arrival and what we’re seeing “now”? Those details may explain a bit about Spider-Man (and may give away a bit about where Superior Spider-Man is headed), but I think your suggestion that Otto might just have gotten better at imitating Peter seems like the most likely option. He’s already learning some important lessons about being quippy and upbeat, and while it seems like he would be worse at that under duress, he may have internalized it (or simply brought some of Peter’s traits to the surface) by the time Ultron arrives.

I’m less persuaded by your read that the She-Hulk we meet isn’t Jennifer Walters. She may have a new haircut, but she’s wearing the classic She-Hulk white and pink bodysuit, and Peter seems to recognize her (even though this is apparently his first time to the downed Helicarrier). Hitch certainly has his own take on her, but it’s a little unreasonable to expect his character designs to match Mike Allred’s — they’re apples and oranges.

Speaking of Hitch, the art in this issue is gorgeous. Hitch and Inker Paul Neary fill every last corner with detail, giving Age of Ultron a depth and reality unlike almost anything else on shelves. Occasionally, that level of detail goes beyond basic effect, and actually plays a role in the storytelling.

Space, time, and dramatic irony in one image? That single panel has more going on than some pages in lesser books. Colorist Paul Mounts also deserves a ton of praise for his immersive colors — especially given the limited, dystopian palette — as well as the electric vibrating effect he achieves when Ultron descends on Hammerhead’s hideout.

Ultimately, my favorite part about this issue might just be that we’re dropped in en medias res — we get to skip all of the set-up that makes me so wary of origin stories. In forgoing the origin of the Age of Ultron, we can get down to the business of how to end it. It’s a thrilling place to start, even if it is a little disorienting. Consider me exclusively excited for this event.